Much Ado About Nothing Support 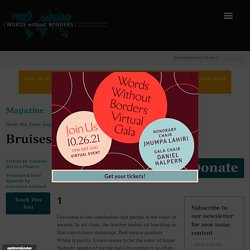 I've come to the conclusion that purple is the color of secrets. In art class, the teacher insists on teaching us that colors have meanings. Red means passion. White is purity. Green seems to be the color of hope. I Blame Jane Austen for 6 Popular Tropes in the Romance Genre (Important for Writers) - Gail Carriger. There are a lot of tropes in genre fiction and romance in particular. 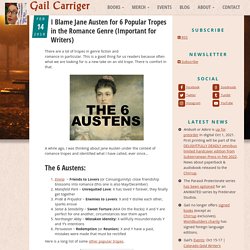 This is a good thing for us readers because often what we are looking for is a new take on an old trope. There is comfort in that. A while ago, I was thinking about Jane Austen under the context of romance tropes and identified what I have called, ever since… Emma ~ Friends to Lovers (or Consanguinity): close friendship blossoms into romance (this one is also May/December)Mansfield Park ~ Unrequited Love: X has loved Y forever, they finally get togetherPride & Prejudice ~ Enemies to Lovers: X and Y dislike each other, sparks ensueSense & Sensibility ~ Sweet Torture (AKA On the Rocks): X and Y are perfect for one another, circumstances tear them apartNorthanger Abby ~ Mistaken identity: X willfully misunderstands Y and Y’s intentionsPersuasion ~ Redemption (or Reunion): X and Y have a past, mistakes were made that must be rectified.

The Dictionary of Obscure Sorrows. Is It Ever Right To Do The Wrong Thing? Michael Walzer Explained. Turns out Batman is the world's greatest philosopher. 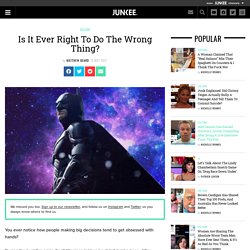 You ever notice how people making big decisions tend to get obsessed with hands? During the bushfire crisis, Scott Morrison told us he didn’t hold a hose.

How Jean-Paul Sartre and Les Temps Modernes Supported Algeria’s Struggle for Freedom. President Emmanuel Macron of France has now admitted that the French state committed terrible crimes in the long war (1954–1962) to prevent Algerian independence: “No crime, no atrocity committed by anyone during the War of Algeria can be excused or left hidden.” 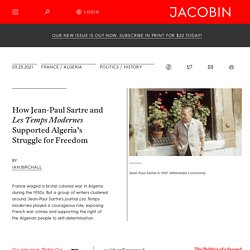 Macron can hardly deny the war crimes, which are now a matter of public record: torture, executions on dubious grounds, the unlawful killing of prisoners. Up to half a million people — mostly Algerian Muslims but also including thousands of reluctant French conscripts — died in the course of the war. Thread by @SethAbramson on Thread Reader App. What It's Like to Learn You're Going to Die. The roots of this trauma may be, in part, cultural. 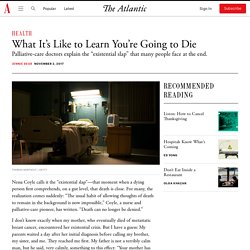 Most people recognize at an intellectual level that death is inevitable, says Virginia Lee, a nurse who works with cancer patients. But “at least in Western culture, we think we’re going to live forever.” Many of Lee’s advanced-cancer patients tell her they had thought of death as something that happened to other people—until they received their diagnosis. “I’ve heard from cancer patients that your life changes instantly, the moment the doctor or the oncologist says it’s confirmed that it is cancer,” she says. How to Ask Someone to be a Job Reference. Much Ado About Nothing. An analysis of three Covid-19 outbreaks: how they happened and how they can be avoided.

A crowded restaurant to celebrate the Chinese New Year; 100 workers infected inside a 19-story building; a group of devout Buddhists travelling by bus for a religious ceremony. 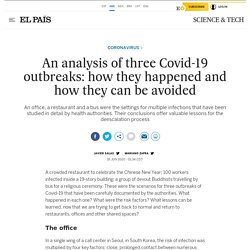 These were the scenarios for three outbreaks of Covid-19 that have been carefully documented by the authorities. What happened in each one? What were the risk factors? What lessons can be learned, now that we are trying to get back to normal and return to restaurants, offices and other shared spaces? The office In a single wing of a call center in Seoul, in South Korea, the risk of infection was multiplied by four key factors: close, prolonged contact between numerous people, in an enclosed space. The staff at the call center on the 11th floor work together at desks containing 13 work stations. On some desks, such as this one, nine of the 13 employees tested positive. These employees were sitting inside an enclosed space with 137 workers. Out of these 137 employees, 79 (57.6%) tested positive. Avoid physical contact. WHEN ARE YOU REALLY AN ADULT? It would probably be fair to call Henry “aimless.” 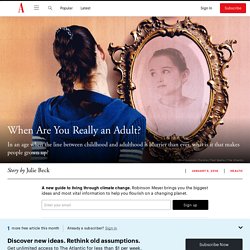 George Will: There is no such thing as rock bottom for Trump. Assume the worst is yet to come.

DIY Stationery & Letterhead. How to prepare for AP exams 2020 & 2021: Tips from a National Scholar. A Look at Logical Fallacies. A Victorian Magazine asked Spinsters why they were single, and the answers were savage. A Victorian-era competition likely would have been forgotten to history if not for the work of Dr. 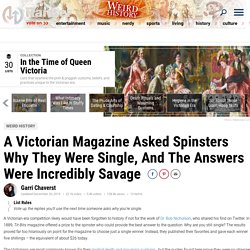 Bob Nicholson, who shared his find on Twitter. In 1889, Tit-Bits magazine offered a prize to the spinster who could provide the best answer to the question: Why are you still single? The results proved far too hilariously on point for the magazine to choose just a single winner. Instead, they published their favorites and gave each winner five shillings – the equivalent of about $26 today. Near-Death- Comics. We Need to Talk About ‘The Giving Tree’ - NYT Parenting. Image Like many new parents, when our first child was born, we were delighted to receive gift boxes of tiny pajama sets, monogrammed baby blankets, and lots and lots of children’s books. 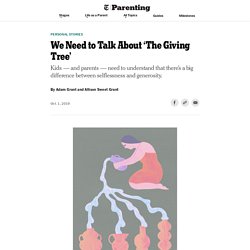