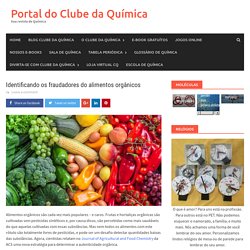 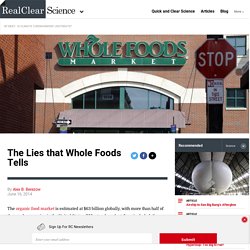 (If "natural products" are included, the organic market is $290 billion in the U.S. alone.) It's no wonder, then, why Wal-Mart and other mainstream retailers are jumping onto the organic bandwagon. There is an awful lot of money to be made. However, according to a damning report issued by the organization Academics Review, the rapidly growing organic food market is built upon a foundation of lies. The report states, in no uncertain terms, that the organic food industry conspired to deceive the public about the safety of conventionally grown food.

People believe a lot of things that we have little to no evidence for, like that vikings wore horned helmets or that you can see the Great Wall of China from space. One of the things I like to do on my blogs is bust commonly held myths that I think matter. Some Pesticides Permitted in Organic Gardening. By Laura Pickett Pottorff, Colorado State University Cooperative Extension horticulturist and plant pathologist If we think organic gardening means vegetables free of any chemical pesticides, we don't have the story quite right. 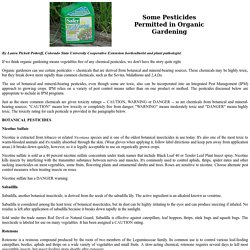 Organic gardeners can use certain pesticides -- chemicals that are derived from botanical and mineral-bearing sources. These chemicals may be highly toxic, but they break down more rapidly than common chemicals, such as the Sevins, Malathions and 2,4,Ds. The use of botanical and mineral-bearing pesticides, even though some are toxic, also can be incorporated into an Integrated Pest Management (IPM) approach to growing crops.

IPM relies on a variety of pest control means rather than on one product or method. Be Aware Fake Honey Is Everywhere, Learn How To Recognize The Real From The Fake. Next time you visit the grocery store, looking for honey, and you are thinking which one to buy, the unknown brand nectar in a plastic jar, or the pricy premium, artisanal honey, you need to think twice before choosing the pricy one as the better one. 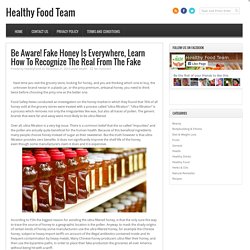 Food Safety News conducted an investigation on the honey market in which they found that 76% of all honey sold at the grocery stores were treated with a process called “ultra-filtration”. “Ultra-filtration” is a process which removes not only the irregularities like wax, but also all traces of pollen. The generic brands that were far-and-away were most likely to be ultra-filtered. Quinoa’s Dark Secret. As health-food fads go, quinoa is so hot right now, to quote the movie Zoolander. 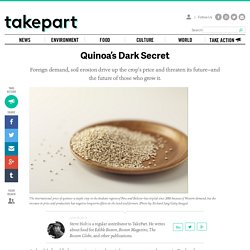 Health food lovers—especially vegans and vegetarians—go nuts for the South American grain-like seed. And with good reason: Quinoa is one of the most nutrient-dense foods on the planet, packed with dietary fiber, vitamins E and B2 and iron, and low in fat. It might be the closest thing we have to a “perfect food.” Your Love Of Quinoa Is Good News For Andean Farmers. Farmer Geronimo Blanco shows his quinoa plants in Patamanta, Bolivia, in February. 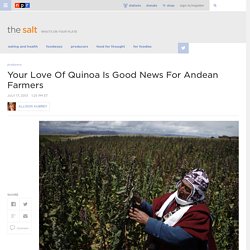 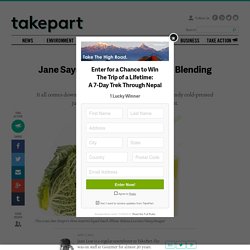 What’s the big deal? Do I just throw a bunch of fruits and vegetables into the blender?” Takepart. Organic food has become a big business. 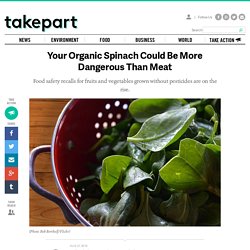 In terms of sale, this small sector of the U.S. ag market raked in more than $40 billion last year, up from about $27 million in 2010. That surge in revenue has not come without growing pains, however: A new report claims that food recalls for organic products are on the rise. Takepart. Whole Foods, say it isn’t so! 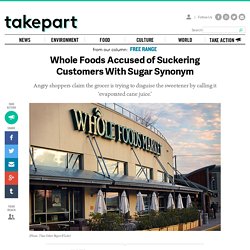 The upscale national grocer has built its reputation on transparency, almost single-handedly catapulting foods that are arguably better for you (and better for the planet) to prominence beyond your crunchy local mom-and-pop health food shop. Despite that, it appears to be taking a page from the playbook of big food and is vigorously defending itself against allegations that it misled customers into believing they were getting something healthier than sugar when they bought cookies made with “evaporated cane juice.”