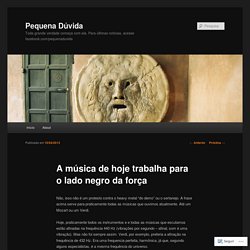 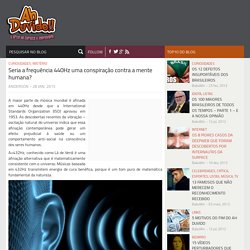 Music makes you smarter (Rock n Roll makes you dumber) Audiences hate modern classical music because their brains cannot cope. "The brain is a pattern seeking organ, so it looks for patterns in music to make sense of what we hear. 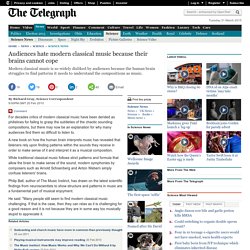 The music of Bach, for example, embodies a lot of the pattern forming process. "Some of the things that were done by those composers such as Schoenberg undermined this cognitive aid for making music easier to understand and follow. Schoenberg's music became fragmented which makes it harder for the brain to find structure. "That isn't to say, of course, that it is impossible to listen to, it is just harder work. It would be wrong to dismiss such music as a racket.

" Mr Ball believes that many traditional composers such as Mozart, Bach and Beethoven subconsciously followed strict musical formula to produce music that was easy on the ear by ensuring it contained patterns that could be picked out by the brain. Under their vision, which has been adopted by many subsequent classical musicians, music no longer needed to be confined to a home note or chord. Musical Map: Cities of the World.

In our connected world, people everywhere tend to enjoy the same top hits, as we can tell by looking at the top song in each country. 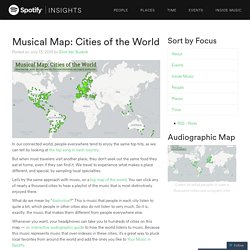 But when most travelers visit another place, they don’t seek out the same food they eat at home, even if they can find it. We travel to experience what makes a place different, and special, by sampling local specialties. Let’s try the same approach with music, on a big map of the world. You can click any of nearly a thousand cities to hear a playlist of the music that is most distinctively enjoyed there. Risky Music Listening, Permanent Tinnitus and Depression, Anxiety, Thoughts about Suicide and Adverse General Health.

Abstract Objective To estimate the extent to which exposure to music through earphones or headphones with MP3 players or at discotheques and pop/rock concerts exceeded current occupational safety standards for noise exposure, to examine the extent to which temporary and permanent hearing-related symptoms were reported, and to examine whether the experience of permanent symptoms was associated with adverse perceived general and mental health, symptoms of depression, and thoughts about suicide. 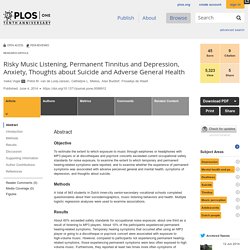 Methods A total of 943 students in Dutch inner-city senior-secondary vocational schools completed questionnaires about their sociodemographics, music listening behaviors and health. Multiple logistic regression analyses were used to examine associations. Results About 60% exceeded safety standards for occupational noise exposure; about one third as a result of listening to MP3 players. Conclusions Risky music-listening behaviors continue up to at least the age of 25 years. Beatles, Rock'n'roll & Mind Control. I am one of those who grew up with The Beatles, Rolling Stones, Bob Dylan, Neil Young, Black Sabbath, Alice Cooper, Led Zeppelin etc. 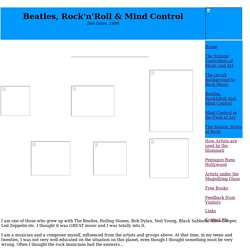 I thought it was GREAT music and I was totally into it. I am a musician and a composer myself, influenced from the artists and groups above. At that time, in my teens and twenties, I was not very well educated on the situation on this planet, even though I thought something must be very wrong. Often I thought the rock musicians had the answers... The Sinister Controllers of Music and Art. When I talk on this subject, I am often met with skepticism and mistrust. 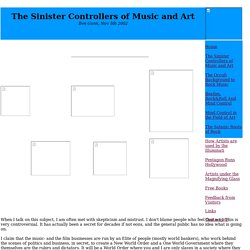 I don't blame people who feel that way. This is very controversial. It has actually been a secret for decades if not eons, and the general public has no idea what is going on. I claim that the music- and the film businesses are run by an Elite of people (mostly world bankers), who work behind the scenes of politics and business, in secret, to create a New World Order and a One World Government where they themselves are the rulers and dictators. It will be a World Order where you and I are only slaves in a society where they are the Masters and make the rules, regardless of what we think. Take a look around. "There is no such thing, at this date in the world's history, in America, as an independent press. There is not one of you who dares to write your honest opinions, and if you did, you know beforehand that it would never appear in print. How Artists are Used. Have you ever asked yourself why some artists have reached the Top and stayed there, although their music or acting is way under the average? 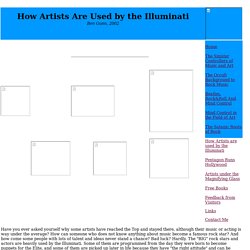 How can someone who does not know anything about music become a famous rock star? And how come some people with lots of talent and ideas never stand a chance? Bad luck? Hardly. The "BIG" rock stars and actors are heavily used by the Illuminati. This is how the Elite has planned it with regards to using art to help out with achieving the goals: 1. 2. 3. 4. 5. 6. The Good News: No matter how hard the people in power try to manipulate the masses and control the minds of those we are listening to, the human spirit is strong. Aleister Crowley - The Greatest Magician of the 20th Centurty? Backwards messages like “Paul is dead” on their albums and Crowley’s head is present on the cover of “Sgt. 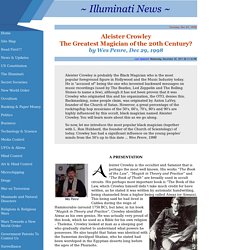 Pepper’s Lonely Hearts Club Band”. Aleister Crowley was born in Warwickshire where he revolted against a strict religious childhood. He left his studies and became initiated into the secret order of the Golden Dawn in 1898. After some time he came into conflict with its leaders and went to Mexico. From there he traveled a lot, to India and Ceylon, where he studied yoga and Buddhism. At first, Crowley didn’t believe her, so he started asking her a few questions to reveal her as a fraud.

The message that was sent to Crowley, told him to sit down by his desk a certain time three days in a row. Crowley’s messenger taught that the old Age of Osiris soon would follow by the new Age of Horus. The messenger also declared that Crowley was the Beast 666 from the “Book of Revelations” (13:18), who had come to destroy Christianity. {*} John Yarker 33~ M.^.P.^.S.^.Gr.^.of Gt. MPB: A história que o Brasil não conhece. Falso documentário que "desvenda" plano de destruir a MPB vai ganhar série na web. 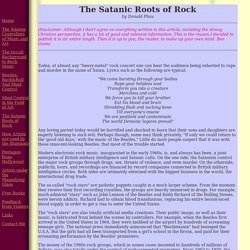 This is the reason I decided to publish it in its' entire length. Then it is up to you, the reader, to make up your own mind. Ben Gunn). Today, at almost any "heavy-metal'' rock concert one can hear the audience being exhorted to rape and murder in the name of Satan. "We come bursting through your bodies Rape your helpless soul Transform you into a creature Merciless and cold We force you to kill your brother Eat his blood and brain Shredding flesh and sucking bone Till everyone's insane We are pestilent and contaminate The world Demonic legions prevail" Any loving parent today would be horrified and shocked to learn that their sons and daughters are eagerly listening to such evil.

The so-called "rock stars" are pathetic puppets caught in a much larger scheme.