12 More Food with less water, mycorrhizae, good vegetables with little water, and no fertilizers. 11 More food with less water, use mycorrhizae (fungi), great root development, increased production. Growbox® plant cocoon anti desertification plantation in Baja California Mexico. Teach plants to grow in arid places. Inventor Pieter Hoff retired from the lily and tulip export business in 2003 to develop a product that he thinks can help save mankind as the world's population soars: a contraption called the Groasis Waterboxx, a plant incubator that doesn't need irrigating and which could help make fertile again the 70% of the world's arid and semi-arid lands whose productivity has been hit by deforestation and overfarming. 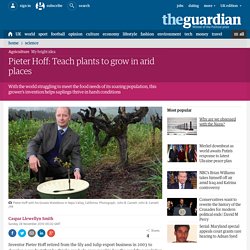 Earlier this month, the 57-year old Dutchman won Popular Science magazine's award for the best invention of 2010, beating 119 contenders, including Apple's iPad and the Porsche 918 Spyder hybrid supercar. What, in the simplest terms, is the Groasis Waterboxx? It is a bucket with a cover with two holes in it to catch rainwater and produce and catch water from condensation, and in the centre opening you can plant saplings or sow seeds. Once it's captured, the water functions as a means of keeping the temperature low below the box and the centre opening creates a nice micro-climate. Waterboxx: tecnologia anti-desertificação para plantar em áreas secas, erosão e rochosas. Groasis Ecological Water Saving Technology. Groasis – a high tech agricultural company from Holland - sells the low cost Groasis Ecological Water Saving Technology. 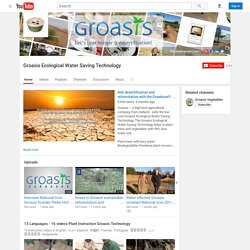 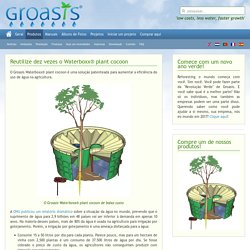 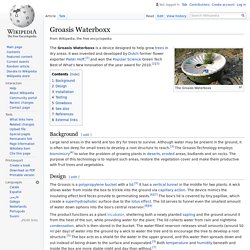 It was invented and developed by Dutch former flower exporter Pieter Hoff,[1] and won the Popular Science Green Tech Best of What’s New Innovation of the year award for 2010.[2][3] Background[edit] Large land areas in the world are too dry for trees to survive. Although water may be present in the ground, it is often too deep for small trees to develop a root structure to reach.[3] The Groasis Technology employs biomimicry[4] to solve the problem of growing plants in deserts, eroded areas, badlands and on rocks. Hopeland Foundation - How? Waterboxx!

The concept The Groasis waterboxx plays an essential role in the educational projects of Hopeland Foundation. 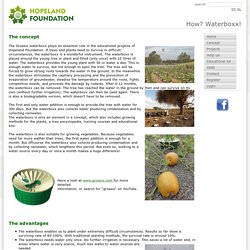 If trees and plants need to survive in difficult circumstances, the waterboxx is a wonderful instrument. Groasis Waterboxx Life+ reforestation results in 7 extreme places in Spain. Anti desertification and reforestation with the Growboxx® plant cocoon. University Valladolid starts reforestation project‬‎ Good for the Environment. Good for Business. Groasis Waterboxx. Tomatoes grown with Waterboxx. Reforest the planet with WaterDisxx. Based on the Groasis waterboxx, the ingenious innovation designed to re-green the planet, the “WaterDisxx” is a tool that makes reforestation possible nearly anywhere. 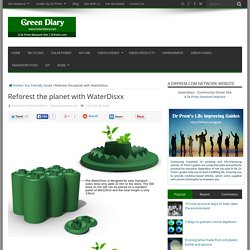 Designed to protect and nurture the seedling, this innovative concept features a 4 kg concrete ring at its bottom that keeps the WaterDisxx in place, a plastic base and cardboard inlay with seeds. There are different cardboard inlays containing different kinds of seeds and they dissolve to provide necessary nutrients to the seedlings. The protective plastic base collects the moisture from the condensed air or rain in its center to provide the seedlings with enough water. The brainchild of Roel Verhagen Kaptein, the WaterDisxx is designed to be easy to manufacture, transport and install. It is also possible to advertise on this mind-blowing product, attracting companies to promote their brand while contribute to a cause as noble as reforestation. Via: Yanko Design. Groasis Jordan/Lebanon. Groasis Jordan/Lebanon's Photos. Photos. Plant instructions for the Groasis Technology - Manuals. Compilation of videos about anti desertification.

Summary of must see videos about anti-desertification and reforestation Groasis Technology Groasis has over 100 videos in its YouTube channel. 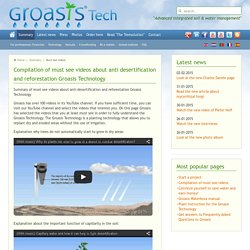 If you have sufficient time, you can visit our YouTube channel and select the videos that interest you. In USA - Groasis Waterboxx. Waterboxx: anti-desertification technology for planting in dry, eroded and rocky areas. ¿Cómo funciona el Groasis waterboxx contra la desertificación? Groasis Waterboxx Grows Trees In Deserts. No need for irrigation, the Groasis Waterboxx yields plant growth in deserts and on rocks Have you ever wanted to grow trees without actually planting them? 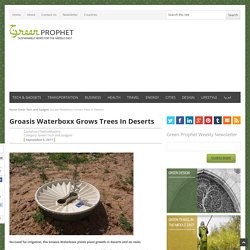 The Groasis Waterboxx is a Jordanian invention that will do just that. Launched in June 2011, the Groasis nurtures a sapling’s growth without the hands-on fuss of shovelling soil and topping up water. With hopes to see it distributed throughout famine struck East Africa, the Groasis Waterboxx could be one solution to natural food shortages.