The Adventures of Sherlock Holmes. When I glance over my notes and records of the Sherlock Holmes cases between the years ‘82 and ‘90, I am faced by so many which present strange and interesting features that it is no easy matter to know which to choose and which to leave. 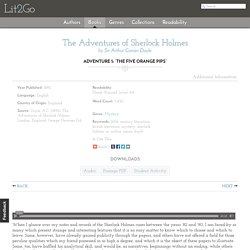 Some, however, have already gained publicity through the papers, and others have not offered a field for those peculiar qualities which my friend possessed in so high a degree, and which it is the object of these papers to illustrate. Some, too, have baffled his analytical skill, and would be, as narratives, beginnings without an ending, while others have been but partially cleared up, and have their explanations founded rather upon conjecture and surmise than on that absolute logical proof which was so dear to him.

The year ‘87 furnished us with a long series of cases of greater or less interest, of which I retain the records. It was in the latter days of September, and the equinoctial gales had set in with exceptional violence. “A client, then?” Sherlock Holmes: dispelling the myths. Sometime in 1885 or 1886, Arthur Conan Doyle was doodling on a sheet of paper. 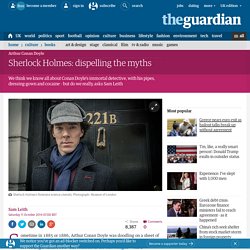 He had the idea – inspired by Auguste Dupin, the sleuth who had solved Edgar Allan Poe's "The Murders in the Rue Morgue" – for a "consulting detective", who would use "the Rules of Evidence" to catch his man. But what would he be called? "Ormond Sacker"? "Sherrinford Holmes"? Had he settled on either of these alternatives, the modern-day fanclubs for the great-grandfather of gumshoes might now style themselves "Sherrinfordians", "Sackerians" or "Ormondians". 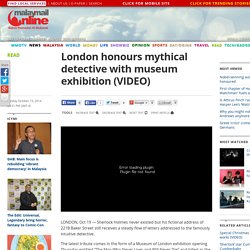 The latest tribute comes in the form of a Museum of London exhibition opening Thursday entitled “The Man Who Never Lives and Will Never Die” and billed as the biggest in 60 years. Part and parcel of London’s literary universe, Holmes was created in 1886 by the author Arthur Conan Doyle and has lived on in television series, films and video games the world over. “His profile and the tools of his trade — pipe, magnifying glass and deerstalker hat — are instantly recognised across the globe,” said Alex Werner, head of the museum’s history collections. What a Character! Comparing Literary Adaptations - The New York Times. Overview | How do literary characters evolve in various portrayals? 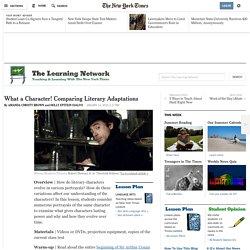 How do these variations affect our understanding of the characters? In this lesson, students consider numerous portrayals of the same character to examine what gives characters lasting power and why and how they evolve over time. Materials | Videos or DVDs, projection equipment, copies of the current class text Warm-up | Read aloud the entire beginning of Sir Arthur Conan Doyle’s Sherlock Holmes adventure “The Hound of the Baskervilles.” Immediately afterward, have students freewrite about the Sherlock Holmes character – his age, mannerisms, personality, attitude, thought process and anything else they gather from this reading. Next, play a trailer for the 2009 Guy Ritchie film “Sherlock Holmes,” and then ask: What did you notice about how Robert Downey Jr. portrays Sherlock Holmes?

Read the article with your class, using the questions below. Questions | For discussion and reading comprehension: 1. 2. 3. 4. 5. 6. 7. In 'Sherlock,' A Classic Sleuth For The Modern Age. Sherlock: A Character Who's More Than Elementary. Basil Rathbone (right) as Sherlock Holmes and Nigel Bruce as Dr. 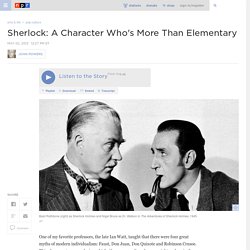 Watson in The Adventures of Sherlock Holmes, 1945. AP hide caption itoggle caption AP Basil Rathbone (right) as Sherlock Holmes and Nigel Bruce as Dr. Watson in The Adventures of Sherlock Holmes, 1945. One of my favorite professors, the late Ian Watt, taught that there were four great myths of modern individualism: Faust, Don Juan, Don Quixote and Robinson Crusoe. In the 125 years since Arthur Conan Doyle created the world's greatest detective, 75 different actors have played him in the movies, and scads more on TV, not to mention the countless knockoffs like The Mentalist or Mr. 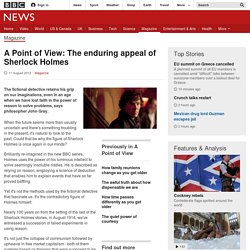 When the future seems more than usually uncertain and there's something troubling in the present, it's natural to look to the past. Could that be why the figure of Sherlock Holmes is once again in our minds? Brilliantly re-imagined in the new BBC series, Holmes uses the power of his luminous intellect to solve seemingly insoluble riddles. He is described as relying on reason, employing a science of deduction that enables him to explain events that have so far proved baffling. Yet it's not the methods used by the fictional detective that fascinate us. Sherlock (BBC) : A film analysis.