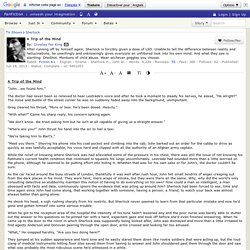 " The doctor had never been so relieved to hear Lestrade's voice and after he took a moment to steady his nerves, he asked, "He alright? " The noise and bustle of the street corner he was on suddenly faded away into the background, unimportant. Greg cleared his throat, "More or less. He's been dosed. "With what? " "We don't know. "Where are you? " "We're taking him to Bart's. " "Meet you there. " While the relief of knowing where Sherlock was had alleviated some of the pressure in his chest, there was still the issue of not knowing his flatmate's current health condition that continued to squeeze his lungs uncomfortably.

As the car raced around the busy streets of London, thankfully it was well after rush hour, John felt small tendrils of anger creeping out from the dark places in his mind. He shook his head, a sigh rushing sharply from his nostrils. "What," He snapped harshly, "Are you two doing here? " "What the hell is going on? " "What is that for? " "No. Quite Contrary, Sherlock. Disclaimer: I do not own Sherlock, nor any of the characters therein. 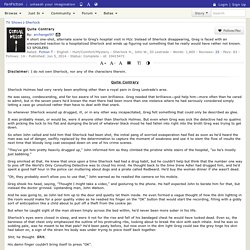 Quite Contrary Sherlock Holmes had very rarely been anything other than a royal pain in Greg Lestrade's arse. He was sassy, condescending, and far too aware of his own brilliance. Greg needed that brilliance—god help him—more often than he cared to admit, but in the seven years he'd known the man there had been more than one instance where he had seriously considered simply letting a case go unsolved rather than have to deal with that snark. So whenever Sherlock wound up drugged, ill, or in any other way incapacitated, Greg felt something that could only be described as glee. It was probably mean, or would be, were it anyone other than Sherlock Holmes. "They've got him pretty heavily drugged up," John informed him as they climbed the pristine white stairs of the hospital, "so he's mostly just babbling. " Greg smirked at that. Greg shook his head, saying, "Thought I might take a video," and gesturing to the phone. 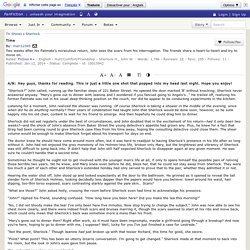 This is just a little one shot that popped into my head last night. Hope you enjoy! "Sherlock? " John called, running up the familiar steps of 221 Baker Street. He opened the door marked 'B' without knocking; Sherlock never answered anyway. Listening for a moment, John realized the shower was running. Sherlock did not eat regularly under the best of circumstances, and John doubted that in the excitement of his return—had it only been two weeks? The doctor knew he should have come around more often, but it was hard to readjust to having Sherlock's presence in his life after so long without it.

Sometimes he thought he ought not to get involved with the younger man's life at all, if only to spare himself the possible pain of reliving those terrible two years. Hearing the water shut off, John stood up and looked expectantly at the door to the bathroom. "What are those? " Sherlock fic: Road to Freedom - Ariane DeVere. Title: Road to FreedomAuthor: Ariane DeVereLite-beta and general pom-pom waving (that says POM-POM, you filthy-minded reader, you): Mirith Griffin and Squire. 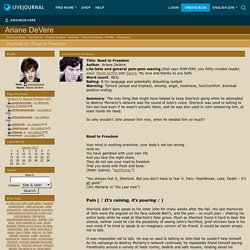 My love and thanks to you both.Word count: 4832Rating: R for language and potentially disturbing contentWarning: Torture (actual and implied), whump, angst, loneliness, hurt/comfort. Eventual positive ending. Summary: The only thing that might have helped to keep Sherlock going while he attempted to destroy Moriarty’s network was the sound of John’s voice. Sherlock was used to talking to him out loud even if he wasn’t actually there, and he was also used to John answering him, at least inside his head.

So why wouldn’t John answer him now, when he needed him so much? Road to Freedom Your mind is working overtime; your body’s not too strong. “You always feel it, Sherlock. Pain ( ♪ It’s raining, it’s pouring ♪ ) Sherlock didn’t dare speak to his inner John for many weeks after the Fall. It was impossible not to talk. There was no reply.