What are Cybernetics and Systems Science? 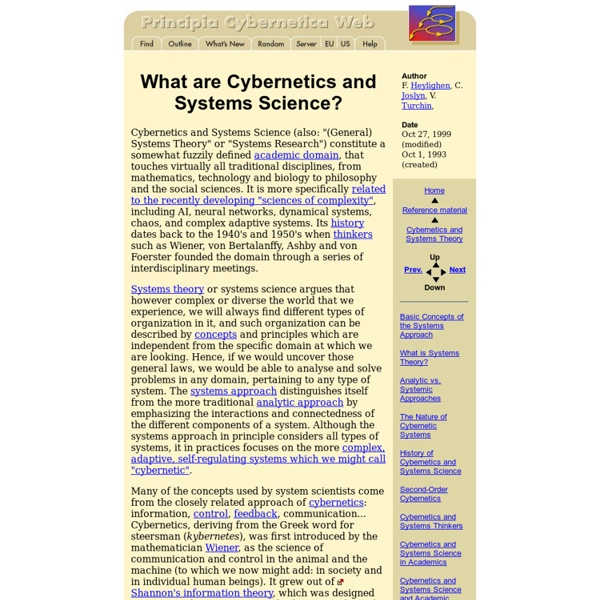 Designing robots to help in a disaster View the video Dennis Hong first spied Japan’s ruined nuclear power plant from a bus wrapped in plastic. A hefty layer of protection guarded the seats, floors and handles from radioactive dust. More than three years earlier, after an earthquake and tsunamis battered Japan’s eastern coast, the Fukushima Daiichi Nuclear Power Station blew, blasting radiation into the sea and sky. “It’s like a disaster site frozen in time,” Hong says. Workers toiled day and night to save the plant, but they had to get out as radiation levels rose. Ideally, robots could take over for human crews. Hong, a UCLA roboticist, is one of several engineers racing to make robots that can come to the rescue in disasters. Engineers have built impressive-looking humanlike bots that can play trumpet and even compete against each other in slow-moving soccer games. So DARPA kicked off a contest to create robots that someday could do the job. National Robotics Engineering Center/Carnegie Mellon University On the scene D.

Glossary of systems theory A glossary of terms as relating to systems theory.[1] A[edit] B[edit] C[edit] Cascading failure: failure in a system of interconnected parts, where the service provided depends on the operation of a preceding part, and the failure of a preceding part can trigger the failure of successive parts.Closed system: a system which can exchange energy (as heat or work), but not matter, with its surroundings.Complexity: A systemic characteristic that stands for a large number of densely connected parts and multiple levels of embeddedness and entanglement. Not to be confused with complicatedness, which denotes a situation or event that is not easy to understand, regardless of its degree of complexity.Culture: The result of individual learning processes that distinguish one social group of higher animals from another. D[edit] Development: The process of liberating a system from its previous set of limiting conditions. E[edit] F[edit] H[edit] I[edit] L[edit] M[edit] O[edit] Open System Model (basics) P[edit]

Dissertation « The Dreaming Game Designer This large post has the final version of my dissertation, be advised that the word count came in at 6585 words, it’s a long read but you should be able to just skip to the Further Issues & The Nature of Puzzles sections right at the end without losing out on too much content. The Challenge of Puzzle Solving in Games – Robert Farr Submitted in partial fulfilment of the requirements for the degree of BA in Creative Computer Games Design at Swansea Metropolitan University (Formerly Swansea Institute of Higher Education) Table of Contents Word Count 6585 Chapter 1: Introduction What is a game? In order to do the above it is first necessary to examine the definition of a game as this informs further discussion of the reasons for why adventure games have suffered recently. For simplicity we shall instead focus on a definition authored by game designer Greg Costikyan. What is a First Person Shooter? What is a Graphic Adventure Game? Chapter Summary Chapter 2: First Person Shooter Half-Life Far Cry 2

Systems - A Journey Along the Way Systems A Journey Along theWay Welcome to a journey in the realm of systems. The journey is still unfolding as this web site continues to evolve over time. Yet, even with the endless changes, there continues to be a connection, in one fashion or another, with systems. The real intent here is not to study systems as a discipline, though more an intent to study lots of things and employ a systems perspective to foster understanding. Every attempt will be made to avoid the major failing of "system science." Enjoy the journey! System The word system probably has more varied meanings than any other word in use today. A system is an entity which maintains its existence through the mutual interaction of its parts. The key emphasis here is "mutual interaction," in that something is occurring between the parts, over time, which maintains the system. This definition of a system implies something beyond cause and effect. Emergence Associated with the idea of system is a principle called emergence.

Home Making Computer Games Is Easy « Meditations on First Gaming Phil Well, not really. Obviously the process of actually making a real game is laboriously difficult and beset with more problems than you could ever presuppose (which is sort of the point), so difficult that any project of any size will find it hard to ever estimate how long their game will take to make. If we are talking man hours to actual end content making games is ludicrously difficult. So maybe we can say finishing a game is hard, but actually making one? Mario is a paradigm we all understand, controls and rules we are familiar with, so where ever the game wants to pull off its quirk (Time Travel! But that’s the thing. My premier theory for Why All Games Are Shit ™ (Alternatively: Why Gaming Isn’t An Art-form ™ or Why All Mainstream Games Are The Same ™) is that to ever get to the position in any studio that gets its works published you’d already have to A. Which leads me back to the indies. After all, designing games is hard, making games is easy. Like this: Like Loading...

SystemsWiki Learning Through Reflection Edited by Arthur L. Costa and Bena Kallick by Arthur L. Costa and Bena Kallick Reflection has many facets. For example, reflecting on work enhances its meaning. Reflection involves linking a current experience to previous learnings (a process called scaffolding). Valuing Reflection The art of teaching is the art of assisting discovery. —Mark Van Doren Teachers who promote reflective classrooms ensure that students are fully engaged in the process of making meaning. In the role of facilitator, the teacher acts as an intermediary between the learner and the learning, guiding each student to approach the learning activity in a strategic way. Unfortunately, educators don't often ask students to reflect on their learning. In response to our questions, students who are inexperienced with reflection offer simple answers such as "This was an easy assignment!" Setting the Tone for Reflection Teachers must signal a shift in tone when they ask students to reflect on their learning. Discussions

Innovator Under 35: Pieter Abbeel, 33 Instead of programming robots to handle each step of a new job, Pieter Abbeel, an assistant professor at UC Berkeley, has created robots that can observe humans demonstrating a task and then mimic them, or learn from pictures how to handle a piece of flexible material they've never seen before. His robots have learned to perform flying acrobatics, tie surgical sutures, and neatly sort socks. Abbeel's key innovation was to program the robots so that they can reliably infer the underlying intent of their instructors, filtering out the "noise"—irrelevant variations, or even slight mistakes, in the instructors' demonstrations. Each robot is usually shown around 10 demonstrations before it can extract general rules of behavior.

System Dynamics Home Page Taekwan Kim's Blog - Validation Theory The following blog post, unless otherwise noted, was written by a member of Gamasutra’s community. The thoughts and opinions expressed are those of the writer and not Gamasutra or its parent company. Today, I’d like to propose a very basic idea: a consequence is a reward whenever it validates the player. If we take the premise as granted, however, a careful examination should produce some practical insights into how validation shapes player activity. Validation: The Source of All Rewards The pursuit of validation—objectively, the psychological result when reality matches schema; subjectively, the feeling that an investment (intellectual, emotional, material, etc.) has been justified—is one of those things that, because it so thoroughly and expansively permeates human behavior, largely escape our conscious awareness. But the cascade of psychological activity involved in validation serves a very real, evolutionary level purpose as a basic and essential survival tool. Closing Thoughts