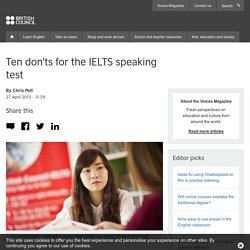 Chris Pell, winner of the British Council’s Teaching English blog award for his post helping IELTS students with pronunciation, gives us his advice in the second part of his list of dos and don'ts for the IELTS speaking test. Read part one for the dos. Don’t memorise answers Lots of people think that the best way to do well in the speaking test is to remember scripted answers and simply use these in the test. This is a bad idea because memorised answers are very obvious and examiners are trained to spot them. Don't worry about the examiner’s opinion I was surprised when some students told me that you can only do well on the speaking test if the examiner agrees with your opinion. Don't insert lots of ‘big’ words A common misconception is that you must have very long, ‘complicated’ words in every sentence to get a high score on the test. Ten dos for the IELTS speaking test. Is it OK to correct yourself in the IELTS speaking test? 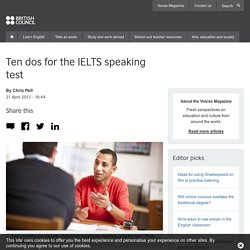 Chris Pell, winner of the British Council’s Teaching English blog award for his post helping IELTS students with pronunciation, gives us his advice in the first part of his list of dos and don’ts for the IELTS speaking test. Do warm up What would happen if a footballer decided to play a game without running or stretching first? They would probably have a terrible game and maybe even injure themselves. IELTS Speaking: The grammar challenge - IELTS blog. You might be surprised to hear that grammar is one of the four criteria used to assess your IELTS Speaking test performance and that it carries 25% of the points. 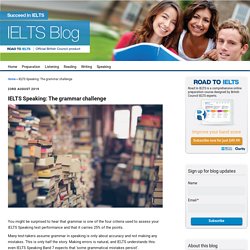 Many test-takers assume grammar in speaking is only about accuracy and not making any mistakes. This is only half the story. Making errors is natural, and IELTS understands this: even IELTS Speaking Band 7 expects that ‘some grammatical mistakes persist’. To avoid mistakes, it helps to think about the tenses you use, and ensure these tenses relate to the questions being asked. So, if the question asked is What did you do at work today? However, grammar is also about showing a range of grammatical structures. IELTS Speaking: Using technology to improve your vocabulary - IELTS blog. Using the language as a regular part of your life Being successful with English, in IELTS and beyond, means finding a way to make using the language a regular part of your life. 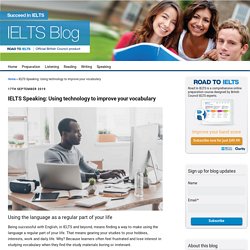 That means gearing your studies to your hobbies, interests, work and daily life. Why? Because learners often feel frustrated and lose interest in studying vocabulary when they find the study materials boring or irrelevant. The problem is that more interesting materials can be difficult to find and can also be difficult to understand. 115051 speaking sample task part 2 transcript. 115049 ielts speaking sample part 2 recording. 115047 speaking sample task part 2. Forvo: the pronunciation dictionary. All the words in the world pronounced by native speakers. Sounds of Speech. Phonemic chart. How English learners can improve intonation. What is intonation and how can you improve this aspect of your pronunciation? 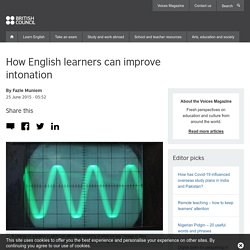 Fazle Muniem, a teacher at the British Council in Bangladesh, explains. Imagine you are asking a cab driver if he will take you to a shopping centre five kilometres away. He replies – in the most chilling, low, flat voice you have ever heard – 'Sure. Get in'. Would you get in? Now imagine there is another cab behind him. If you choose the second cab, it is probably because the driver's intonation has made you feel more welcome: 'Oh, he seems much nicer', you think to yourself. But what is intonation, really? What we mean by intonation Intonation is a feature of pronunciation and common to all languages. At its simplest, intonation could be described as 'the music of speech'.

We can therefore think of intonation as referring to the way we use the pitch of our voice to express particular meanings and attitudes. Grammar - Intermediate to upper intermediate. Look at these examples to see how phrasal verbs are used. 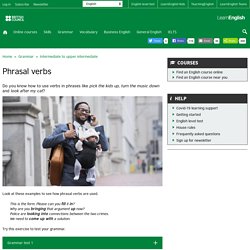 This is the form. Please can you fill it in? Why are you bringing that argument up now? Police are looking into connections between the two crimes.We need to come up with a solution. Grammar - Intermediate to upper intermediate. Look at these examples to see how the future continuous and future perfect are used. 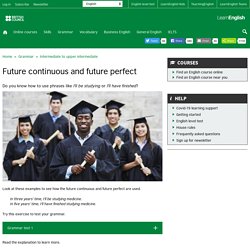 In three years' time, I'll be studying medicine. Grammar - Intermediate to upper intermediate. Look at these examples to see how must, might, may, could, can't and couldn't are used in the past. 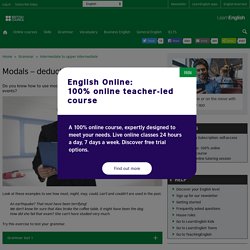 An earthquake? That must have been terrifying! We don't know for sure that Alex broke the coffee table. It might have been the dog. Grammar - Intermediate to upper intermediate. Look at these examples to see how third and mixed conditionals are used. 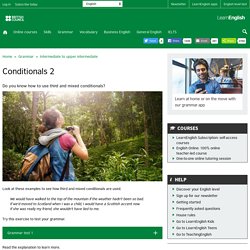 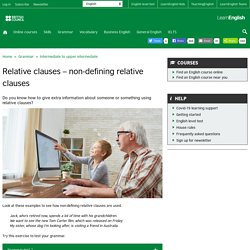