What I Saw in Ferguson. Nothing that happened in Ferguson, Missouri, on the fourth night since Michael Brown died at the hands of a police officer there, dispelled the notion that this is a place where law enforcement is capable of gross overreaction. 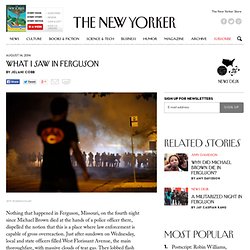 Just after sundown on Wednesday, local and state officers filled West Florissant Avenue, the main thoroughfare, with massive clouds of tear gas. In Fatal Flash, Gaza Psychologist Switches Roles, Turning Into a Trauma Victim - NYTimes.com. How We Grieve: Meghan O’Rourke on the Messiness of Mourning and Learning to L... Collective Punishment in Gaza - The New Yorker. Three days after the Israeli Prime Minister Benjamin Netanyahu launched the current war in Gaza, he held a press conference in Tel Aviv during which he said, in Hebrew, according to the Times of Israel, “I think the Israeli people understand now what I always say: that there cannot be a situation, under any agreement, in which we relinquish security control of the territory west of the River Jordan.” 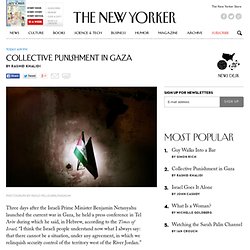 It’s worth listening carefully when Netanyahu speaks to the Israeli people. What is going on in Palestine today is not really about Hamas. It is not about rockets. It is not about “human shields” or terrorism or tunnels. It is about Israel’s permanent control over Palestinian land and Palestinian lives. What Israel is doing in Gaza now is collective punishment. As Netanyahu’s own words show, however, Israel will accept nothing short of the acquiescence of Palestinians to their own subordination. Punishing Palestinians for existing has a long history. Sacrifice of Irishmen who died in first World War marked by President. The presence of President Higgins at ceremonies in Liege and Mons this week to mark the beginning of the first World War was an appropriate recognition by this State of the sacrifice made by the tens of thousands of Irish men who died in that war. 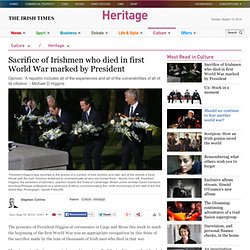 More importantly, it represented a reaching out to all of the traditions on the island of Ireland and the various varieties of Irishness that go to make up this country. For far too long a narrow, constricting definition of Irishness stifled an inclusive remembrance of the past, with those who didn’t fit that definition feeling obliged to remain silent about their family histories and in some cases even deny them. Thankfully that day has passed, although some letters to The Irish Times this week show that there are still people who cling to a warped version of national identity that defines itself purely by hostility to our nearest neighbour. 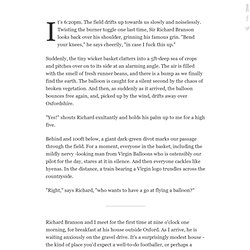 The field drifts up towards us slowly and noiselessly. Twisting the burner toggle one last time, Sir Richard Branson looks back over his shoulder, grinning his famous grin. "Bend your knees," he says cheerily, "in case I fuck this up. " Suddenly, the tiny wicker basket clatters into a 5ft-deep sea of crops and pitches over on to its side at an alarming angle. The air is filled with the smell of fresh runner beans, and there is a bump as we finally find the earth. "Yes! " Behind and 100ft below, a giant dark-green divot marks our passage through the field. Can Parenthood and Pessimism Live Side by Side? - NYTimes.com. When I was about 10 or 11, my father took me to a nursing home one summer evening. 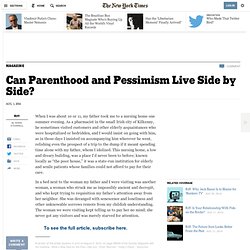 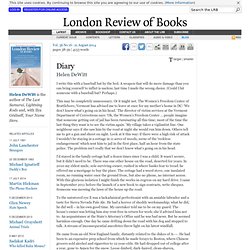 A weapon that will do more damage than you can bring yourself to inflict is useless; last time I made the wrong choice. (Could I hit someone with a baseball bat? Perhaps.) Growing Up : TED Radio Hour. ‘It started with a simple cold and ended with me being admitted to a psychiat... Leslie Ann Horgan Published 19/07/2014|17:20 Share ‘I was in a lot of pain but it’s nothing compared to what my mam and dad went through,” says Audrey Frost with a shudder. 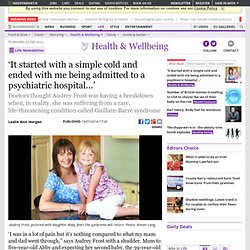 Mum to five-year-old Abby and expecting her second baby, the 39-year-old Dubliner knows the unique agony of seeing your child unwell. Motherhood has brought home to Audrey the terrifying ordeal that her own parents went through when, 18 years ago, she was struck by a rare disease which caused her to become locked in to her body. With doctors at a loss to explain what was wrong, her body began to shut down, leaving Audrey unable to walk and struggling to breathe. What started as a simple cold would bring her to the brink of major organ failure and leave her just hours from death. A bright and bubbly 21 year old, Audrey had been looking forward to spending the Christmas of 1996 with her family in Beaumount, north Dublin. “It started out as a cold, nothing major,’ Audrey says. Lance in Purgatory: The After-Life. Published in the August 2014 issue Here in purgatory, the mansion is smaller, but the wine cellar, paneled in rich mahogany and stocked with thousands of bottles, is truly magnificent. 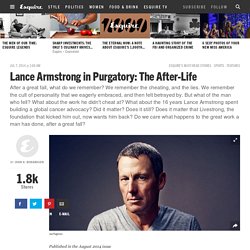