Inside the Design Process to Protect People’s Health on Public Transit. Originally published by IDEO. 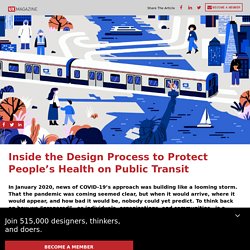 Illustrations by Ran Zheng. In January 2020, news of COVID-19’s approach was building like a looming storm. That the pandemic was coming seemed clear, but when it would arrive, where it would appear, and how bad it would be, nobody could yet predict. To think back on how we “prepared”—as individuals, organizations, and communities—is a lesson in hindsight. Who could have imagined the new vocabulary, behaviors, and habits we’d all acquire in one short year? In New York and New Jersey at that time, more than 280,000 people traveled each day on the Port Authority Trans-Hudson (PATH) train, one of the region’s most important public transit systems connecting New Jersey and New York. By April, the pandemic had gained a threatening grip on the New York City region, and PATH ridership had fallen off by nearly 95%. Try, try again Live prototyping in a high-stakes environment. User Experience (UX) Certificate - Grow with Google.

Persuading the Unpersuadable. We live in an age of polarization. 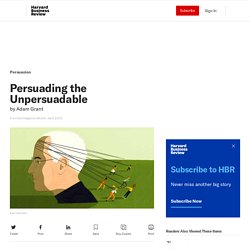 Many of us may be asking ourselves how, when people disagree with or discount us, we can persuade them to rethink their positions. The author, an organizational psychologist, has spent time with a number of people who... The legend of Steve Jobs is that he transformed our lives with the strength of his convictions. The key to his greatness, the story goes, was his ability to bend the world to his vision. The reality is that much of Apple’s success came from his team’s pushing him to rethink his positions.

For years Jobs insisted he would never make a phone. Almost every leader has studied the genius of Jobs, but surprisingly few have studied the genius of those who managed to influence him. A growing body of evidence shows that personality traits aren’t necessarily consistent from one situation to the next. Computer code is a string of if…then commands. Anything You Want: Derek Sivers, Derek Sivers: 0889290399007: Amazon.com: Books. Think Punk (Crecimiento personal) (Spanish Edition): BARRICART, ECEQUIEL: 9788416720378: Amazon.com: Books. Google: Embedded Videos Have Same SEO Value as Uploaded Content. Google’s John Mueller says there’s no difference, when it comes to SEO, between embedded videos and videos natively uploaded to a website. 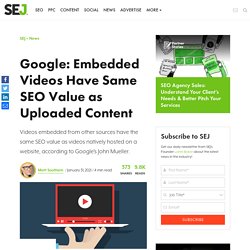 This topic came up more than once during the Google Search Central SEO office-hours on January 29. Saidul Hoque, SEO Manager at RealClicks, started by asking a series of questions about video SEO. One of those questions involves Google’s perception of embedded content versus self-hosted content. Hoque asks: “Is there any difference between embedding and uploading a video from an SEO point of view?” Mueller’s answer is clear and straightforward, but clashes with more commonly held beliefs around SEO and embedded videos. An SEO named Robb Young brings this up minutes later and Mueller elaborates on how Google currently surfaces video results in search. Advertisement. 100 Best Places To Work In Los Angeles 2021.

The best-designed finance projects of 2020. Best Online Behavioral Design Courses — The Complete List. Data Aplicada. Data Visualization. 5 Templates for Better Understanding Your Customers. Once you understand your personas’ needs, it’s time to determine how to meet them. 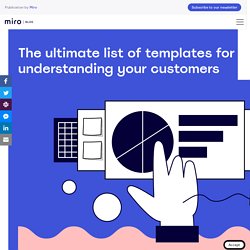 Agile development teams work with stakeholders to create user stories: simple statements to describe what users want, so they can develop a shared understanding of customers, and prioritize tasks and features to fit this customer-centric approach. A user story is typically formatted as a phrase about who the user is, what they want, and why. For example: “As a first-time homebuyer, Anna wants access to multiple mortgage options so she can get the best deal.” Putting this idea in the first person helps keep the focus on the user, rather than the feature. And writing several stories in the same format enables you to directly compare the value of each one. 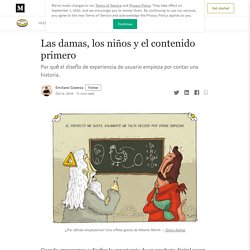 True North. Improve Customer Experience with UX Investments that Increase ROI. When User Experience (UX) improves the customer experience, it affects the company’s ROI (Return on Investment) because good UX investments enhance customer satisfaction. Satisfied customers are loyal; they trust a company’s products, and they want to come back for more, which is why satisfied customers are vital to a company’s success – and are its very reason for existing. Here, you’ll learn which steps you can specifically take to boost your customers’ satisfaction—and likewise your company’s ROI—through investments in specific UX techniques and work processes. UX, Customer Satisfaction and ROI Go Hand in Hand at Amazon Let’s start with the classic example of Amazon before we delve any further. Amazon is a prime example of a company that has built its success and ROI upon a focus on customer experience throughout the entire customer journey and that continually measures the user experience.