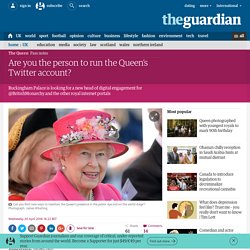 Appearance: Stuffy-chic. Age: Seven years. I’m no historian, but I’m pretty sure I remember there being a British monarchy more than seven years ago. Oh, it’s more than 1,000 years old, dear boy. What we’re talking about, however, is @BritishMonarchy, the Queen’s Twitter account, which was started in April 2009. Ah. I see. Ah yes. Twitter's role in modern warfare. Image copyright Getty Images Virtual warfare is being waged on social networks with the majority of users unaware that nations and militant groups alike are targeting their hearts and minds. 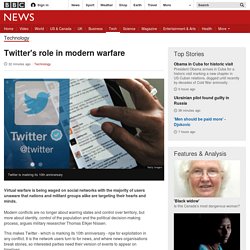 Modern conflicts are no longer about warring states and control over territory, but more about identity, control of the population and the political decision-making process, argues military researcher Thomas Elkjer Nissen. This makes Twitter - which is marking its 10th anniversary - ripe for exploitation in any conflict. It is the network users turn to for news, and where news organisations break stories, so interested parties need their version of events to appear on timelines It has been used most notably by jihadist groups but, increasingly, there are also worries that states such as Russia may be using the network to influence populations without anyone noticing.

Grooming recruits Despite this, the group has used Twitter to gain and hold the attention of a mass audience, and to attract supporters. 10 years of Twitter: The tweets that changed lives. Image copyright Sumita Dalmia. 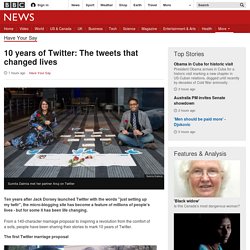 Futurelearn. Studies of social media have tended to focus on individual platforms, which may lead to the impression that each platform is mainly used in one particular way by everybody. 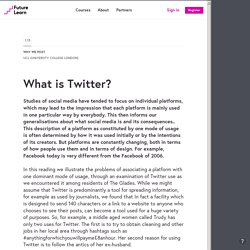 This then informs our generalisations about what social media is and its consequences.. This description of a platform as constituted by one mode of usage is often determined by how it was used initially or by the intentions of its creators. But platforms are constantly changing, both in terms of how people use them and in terms of design. For example, Facebook today is very different from the Facebook of 2006. In this reading we illustrate the problems of associating a platform with one dominant mode of usage, through an examination of Twitter use as we encountered it among residents of The Glades. Twitter to train prosecutors in fight against online abuse. Twitter is to train prosecutors in England and Wales to better fight online abuse, as the internet is increasingly used as a weapon by perpetrators of domestic abuse, rape and sexual violence against women. 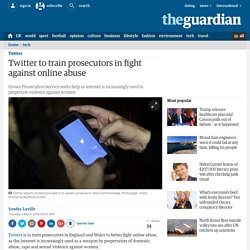 The Crown Prosecution Service said the US-based social network would help it contend with criminal activity such as using the internet to post explicit images of former partners – an offence under the new revenge pornography laws – and the monitoring and stalking of victims using spyware and GPS. Jenny Hopkins, chief crown prosecutor and the CPS lead on violence against women, told the Guardian that Twitter experts were being brought in to train prosecutors and update their skills and knowledge.

Stephen Fry quits Twitter, saying 'fun is over' after Bafta spat. Bafta show host Stephen Fry has confirmed he has left Twitter declaring "the fun is over". 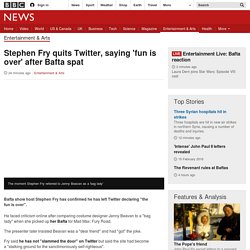 He faced criticism online after comparing costume designer Jenny Beavan to a "bag lady" when she picked up her Bafta for Mad Max: Fury Road. The presenter later insisted Beavan was a "dear friend" and had "got" the joke. Fry said he has not "slammed the door" on Twitter but said the site had become a "stalking ground for the sanctimoniously self-righteous". Stromae - carmen. The end of Twitter? Not for its users – we love this great leveller. Few of us enjoy a blitzkrieg of obscene invective from perfect strangers. 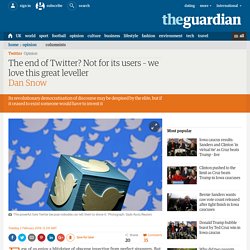 But that’s what happens – a lot – when you express opinions on Twitter. I don’t particularly relish that bit. But it has been a miniscule price to pay for a revolutionary phenomenon that has changed my life, and millions of others. Twitter updates cyberbullying restrictions. Image copyright Getty Images Twitter has updated its rules to highlight it is taking a tougher stance against abuse. 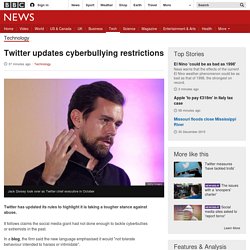 It follows claims the social media giant had not done enough to tackle cyberbullies or extremists in the past. In a blog, the firm said the new language emphasised it would "not tolerate behaviour intended to harass or intimidate". Greek PM goads Turkish PM on Twitter over downing of Russian jet. A highly unusual online exchange has taken place on Twitter between the prime ministers of Greece and Turkey before the former deleted his tweets – but only from the English version of his account. 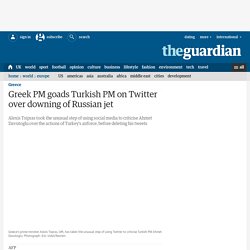 The official English-speaking account of Greek prime minister Alexis Tsipras posted four tweets addressed to his Turkish counterpart Ahmet Davutoglu on Sunday, goading him about Turkey’s downing of a Russian jet and Turkey’s violations of Greek airspace. “To Prime Minister Davutoglu: Fortunately our pilots are not mercurial as yours against the Russians #EuTurkey” Tsipras tweeted. Both men attended an EU-Turkey summit on refugees in Brussels on Sunday. Tsipras did not explain whether his tweets reproduced a conversation between the two or were written especially for Twitter. “What is happening in the Aegean is outrageous and unbelievable #EUTurkey” Tsipras continued.

Tsipras said the two countries should focus on saving refugees, not on weapons. How To Use Hashtags to Power Your Social Media Posts. If you’re a social media user, you must’ve seen hashtags everywhere. 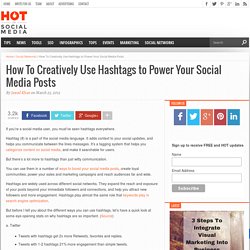 Hashtag (#) is a part of the social media language. It adds context to your social updates, and helps you communicate between the lines messages. Twitter's first TV ad confuses World Series viewers. Image copyright Twitter The first television advertisement campaign by Twitter has left some American viewers confused. A selection of baseball-related tweets were featured in the ad, which was shown during the live coverage of baseball's season-ending World Series. However, text appeared so quickly in the lively sequence that some took to the web to express bewilderment. The ad was made to promote "Moments", which highlights trending stories on the social media platform. How our leaders can avoid Twitter blushes. Prime Minister Joseph Muscat tweets regularly. The Internet of Tweets — The Message. While the Internet has never shied away from offering unsolicited advice to Twitter’s leadership, it has perhaps never faced such impassioned arguments about how the company can get its mojo back from some of its closest supporters.

While many businesses would envy the fact that Twitter has pretty huge revenues and a user base that is enormous in comparison to almost anything except Facebook, it’s become conventional wisdom that the company needs to work to find its bearings again. And oddly, getting Twitter back on track may mean taking another look at one small bit of news that got overshadowed by a Black Eyed Pea on that day five years ago. Let’s Get It Started In the spring of 2010, Twitter was just graduating from being the hottest startup in tech to being a genuine cultural phenomenon. Chirp was the company’s first big conference, a glitzy coming-out for the company and its leaders. Where is the love?

Twitter Has A 136-Page Handbook For Politicians And It's Hilarious : It's All Politics. The cover of Twitter's manual for governments and elections. Twitter hide caption itoggle caption Twitter Twitter seems simple — just type in 140 characters and hit enter, right? But Twitter can be tough. Building an audience. Well, elected officials, fear not! Isis threatens Twitter employees over blocked accounts. How to Get 2000 Organic, Targeted, & Engaged Twitter Followers in Just 2 Months  — Best of BeTweet. Saturday marked 2 months since BeTweet soft-launched. In two months, BeTweet built an engaged following, which is also 100% organic and targeted.

I have to admit, I am slightly unimpressed. I could have done better if I didn’t procrastinate so damn much. The fact is, though, a lot of startups struggle with twitter, and this is why I created the Twitter for Growth report, which I have given for FREE to every subscriber of BeTweet. Grow Your Business. Twitter changes: 20 hits and misses from the social network's history. Grump’s Internet Law dictates that whenever a large social network like Facebook or Twitter changes its design or adds a major new feature, people kick up a stink online claiming it’s going to ruin the service.

Sometimes, they’re right, and the company executes a quick u-turn. Sometimes, the new feature flops and is retired at a later point. But quite often, the new feature beds in nicely, and becomes an important part of the social network. Promoted tweet used to complain about British Airways. The Beginner's Guide to the Hashtag. If you’re a social media novice, hashtags — those short links preceded by the pound sign (#) — may seem confusing and unnecessary. But they are integral to the way we communicate online, and it’s important to know how to use them (even though some people, like Jimmy Fallon and Justin Timberlake, are not the biggest fans).

Plus, they can be a lot of fun. Stephen Fry on the future of Twitter: 'it's become like a utility' 23 Seldom-Used Ideas for Utilizing Twitter Lists. 366 Flares Filament.io 366 Flares × The Beginner's Guide to Twitter. Update: This post was updated November 2013 to reflect current statistics and tools. Twitter Tips for Beginners: Everything I Wish I Knew When I Started. 9.6K Flares Filament.io 9.6K Flares × Part 2: Conversational Archetypes: Six Conversation and Group Network Structures in Twitter. After examining thousands of maps of hundreds of subjects and events we found six distinct network structures in Twitter social networks.

Each is profiled below. The Beginner's Guide to the Hashtag. The Technology Hidden Inside Every Tweet. Illustration by David ParkinsBehind this week's cover Consider the tweet. It’s short—140 characters and done—but hardly simple. If you open one up and look inside, you’ll see a remarkable clockwork, with 31 publicly documented data fields. A Brief History Of Twitter [Infographic] Hashtags.

Hashtags considered #harmful. The noble hashtag is cursed by a problem Yogi Berra could appreciate: Too many people use it, so no one goes there. Hashtagging & Collective Intelligence. How Many Twitter Accounts Should a Brand Have? How does Twitter make money? How to Film a Revolution - a tutorial - Occupy the Movie. Follow the Pope on Twitter and spend less time in purgatory, says Vatican. 7 Great Twitter Tools That Will get all your Tweeting Needs Covered! 10 Tips To Help You Use TweetDeck And Twitter More Efficiently. How to Get Started With New Twitter Lists. 16 Effective Ways to Get People to Read and Retweet your Content. Starbucks extends gifting platform to Twitter. 75 Things I Learned on My Journey to 100,000 Twitter Followers. Getting More Leads with Social. Zappos uses Twitter to generate over 1,200 conversations per month with its customers.