Prickly heat. Prickly heat, also known as miliaria rubra, is an itchy rash of small, raised red spots that causes a stinging or prickling sensation on the skin. 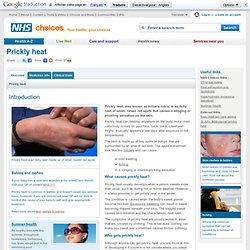 Prickly heat can develop anywhere on the body, but it most commonly occurs on your face, neck, back, chest and thighs. Healthy lifestyle and the science of good skin care. 22 July 2012Last updated at 22:01 ET Sun protection is one of the main issues in good skin care Looking younger for longer is a popular obsession but what's the scientific truth about younger looking skin, asks plastic surgeon Dr Rozina Ali. 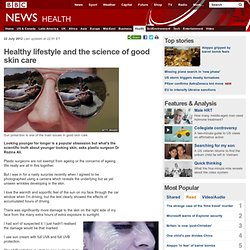 Plastic surgeons are not exempt from ageing or the concerns of ageing. We really are all in this together. Family sugar remedy tested for healing people's wounds. 14 February 2013Last updated at 22:54 ET Moses Murandu saw sugar treatment being used often as a child in Zimbabwe A nurse is researching whether an old family remedy using sugar to heal wounds does actually work. 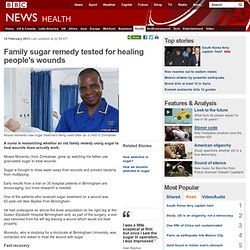 Moses Murandu, from Zimbabwe, grew up watching his father use granulated sugar to treat wounds. Sugar is thought to draw water away from wounds and prevent bacteria from multiplying. Early results from a trial on 35 hospital patients in Birmingham are encouraging, but more research is needed. When will we take medicinal honey seriously? 22 July 2014Last updated at 19:09 By Zoe Gough Reporter, BBC Nature Honey is now regularly being shown to kill superbugs in the laboratory and save patient's limbs on hospital wards, but why is its medicinal use still so limited in the UK? 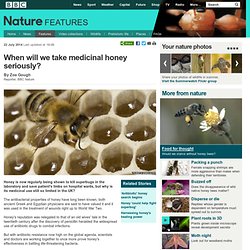 The antibacterial properties of honey have long been known, both ancient Greek and Egyptian physicians are said to have valued it and it was used in the treatment of wounds right up to World War Two. Why spotting the best acne treatment is a pain. 3 September 2011Last updated at 00:54 Acne can be a very painful and distressing condition. 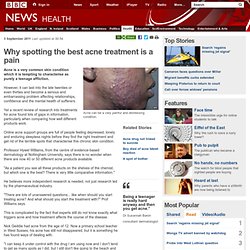 Acne is a very common skin condition which it is tempting to characterise as purely a teenage affliction. However, it can last into the late twenties or even thirties and become a serious and embarrassing problem affecting relationships, confidence and the mental health of sufferers. Yet a recent review of research into treatments for acne found lots of gaps in information, particularly when comparing how well different products work. Online acne support groups are full of people feeling depressed, lonely and enduring sleepless nights before they find the right treatment and get rid of the terrible spots that characterise this chronic skin condition. Professor Hywel Williams, from the centre of evidence-based dermatology at Nottingham University, says there is no wonder when there are now 40 or 50 different acne products available.

How to Prevent Back Acne. 5 Ways to Get Rid of Acne Cysts Fast. Acne drug Roaccutane 'overused' says UK dermatologist. By Adina Campbell Newsbeat reporter 26 November 2012 Last updated at 14:41 Share An acne drug, which it is claimed is linked to depression, is being given to a growing number of young people who don't need it, says one of the UK's top dermatologists. 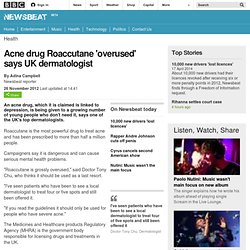 Roaccutane is the most powerful drug to treat acne and has been prescribed to more than half a million people. Campaigners say it is dangerous and can cause serious mental health problems. In development: a vaccine for acne. First it was smallpox. 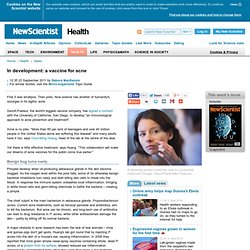 Then polio. Now science has another of humanity's scourges in its sights: acne. Sanofi-Pasteur, the world's biggest vaccine company, has signed a contract with the University of California, San Diego, to develop "an immunological approach to acne prevention and treatment". 'Harmless skin virus' fights acne. 25 September 2012Last updated at 00:11 ET A harmless virus that lives on our skin could be used as a treatment for acne, scientists believe. 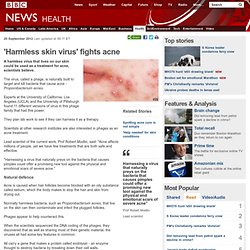 The virus, called a phage, is naturally built to target and kill bacteria that cause acne - Propionibacterium acnes. Experts at the University of California, Los Angeles (UCLA) and the University of Pittsburgh found 11 different versions of virus in this phage family that had this power. They plan lab work to see if they can harness it as a therapy. Continue reading the main story. Warning over 'epidemic’ of skin allergies from chemical in cosmetics and household products. Drug allergies: Culprit protein found. 18 December 2014Last updated at 04:25 ET People experience redness and swelling when taking certain medicines Allergic reactions to drugs and injections could stem from one single protein, research in mice suggests. 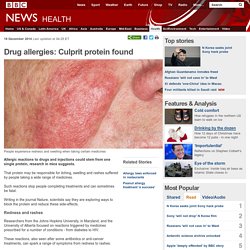 That protein may be responsible for itching, swelling and rashes suffered by people taking a wide range of medicines. Such reactions stop people completing treatments and can sometimes be fatal. Writing in the journal Nature, scientists say they are exploring ways to block the protein and reduce these side-effects. Redness and rashes Researchers from the Johns Hopkins University, in Maryland, and the University of Alberta focused on reactions triggered by medicines prescribed for a number of conditions - from diabetes to HIV.

These reactions, also seen after some antibiotics or anti-cancer treatments, can spark a range of symptoms from redness to rashes. Postinflammatory Hyperpigmentation. 4 Steps to Getting Rid of a Cystic Pimple, Fast. You’re Showering Too Much. “And so what if,” Skotnicki speculated, “as a society, you actually triggered eczema by overwashing?” 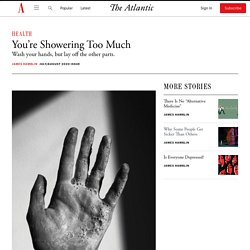 Continue reading the main story Mosquito-borne diseases result in the deaths of a million people every year Only a few hundred of the species bite humans The females are responsible for spreading disease during their blood-meal. The males prefer to dine on plant sugars. An epidemic of chikungunya - a viral disease carried by daytime-biting mosquitoes - is currently raging in the Caribbean. There are more than 5,900 suspected cases affecting almost half the islands, and even French Guiana on the mainland.

Here’s What Happens Inside You When a Mosquito Bites. Mosquitoes lured by body odour genes. The likelihood of being bitten by mosquitoes could be down to genes that control our body odour, a preliminary study in Plos One suggests. Researchers tested pairs of identical and non-identical twins to see how attractive they were to mosquitoes. Identical twins were more likely to have similar levels of attractiveness - suggesting shared genetic factors were at play. The "intriguing" results must now be assessed in larger trials, experts say. Researchers have long tried to understand what drives mosquitoes to bite certain people more than others.

Recent work shows the insects may be lured to their victims by body odour. And anecdotal reports suggest some relatives are just as likely to be bitten as each other. Scientists from the UK and US wanted to find out whether genes were behind this phenomenon. To test their theory they enlisted 19 non-identical and 18 identical pairs of twins in a pilot study. This tiny, wearable patch makes you invisible to mosquitos.

They say the chemical could help render people "invisible" to the insects. Doubts over insect-bite treatment. Thermacell - Amazon.