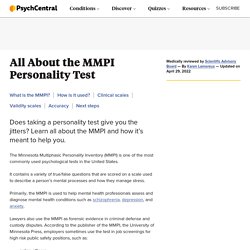 It is primarily intended to test people who are suspected of having mental health or other clinical issues. MMPI 2 First 75 Questions out of 567 Psych Exam. DSM5 ICD9 Crosswalk 1. Mental Health Conditions. A mental illness is a condition that affects a person's thinking, feeling or mood. 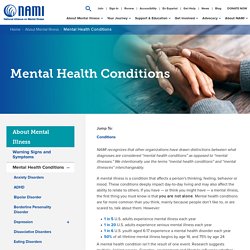 Such conditions may affect someone's ability to relate to others and function each day. Each person will have different experiences, even people with the same diagnosis. Recovery, including meaningful roles in social life, school and work, is possible, especially when you start treatment early and play a strong role in your own recovery process. A mental health condition isn’t the result of one event. Research suggests multiple, linking causes. 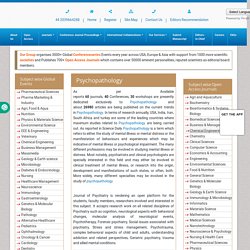 In terms of research annually, USA, India, Iran, South Africa and turkey are some of the leading countries where maximum studies related to Psychopathology are being carried out. As reported in Science Daily Psychopathology is a term which refers to either the study of mental illness or mental distress or the manifestation of behaviours and experiences which may be indicative of mental illness or psychological impairment. Teaching psychopharmacology: what wor... [J Clin Psychopharmacol. 2008.

The Startup That Wants to Cure Social Anxiety. Brett Redding felt like he was out of options. 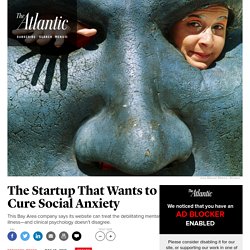 “It started with little things—having trouble making eye contact,” he told me. Soon it got worse. Itled. By Craig S. 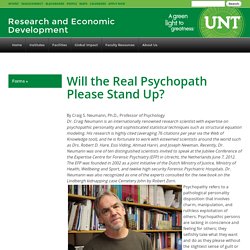 Neumann, Ph.D., Professor of Psychology Dr. Craig Neumann is an internationally renowned research scientist with expertise on psychopathic personality and sophisticated statistical techniques such as structural equation modeling. His research is highly cited (averaging 76 citations per year via the Web of Knowledge tool), and he is fortunate to work with esteemed scientists around the world such as Drs. Effectiveness of Psychological Treatments for Depressive Disorders in Primary Care: Systematic Review and Meta-Analysis. Abstract PURPOSE We performed a systematic review of the currently available evidence on whether psychological treatments are effective for treating depressed primary care patients in comparison with usual care or placebo, taking the type of therapy and its delivery mode into account. 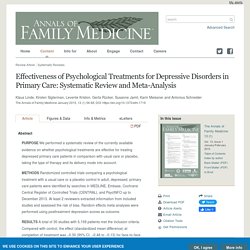 METHODS Randomized controlled trials comparing a psychological treatment with a usual care or a placebo control in adult, depressed, primary care patients were identified by searches in MEDLINE, Embase, Cochrane Central Register of Controlled Trials (CENTRAL), and PsycINFO up to December 2013. Psychotherapy is effective but underutilized, review shows. Psychotherapy is effective, helps reduce the overall need for health services and produces long-term health improvements, according to a review of research studies conducted by the American Psychological Association. 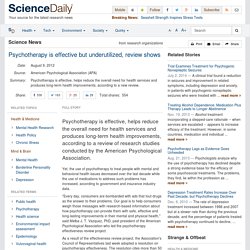 Yet, the use of psychotherapy to treat people with mental and behavioral health issues decreased over the last decade while the use of medications to address such problems has increased, according to government and insurance industry data. "Every day, consumers are bombarded with ads that tout drugs as the answer to their problems. Our goal is to help consumers weigh those messages with research-based information about how psychotherapy can provide them with safe, effective and long-lasting improvements in their mental and physical health," said Melba J. T. Vazquez, PhD, past president of the American Psychological Association who led the psychotherapy effectiveness review project.

To Treat Depression, Drugs or Therapy? Photo You’re feeling down, and your doctor or therapist has confirmed it: You have depression. 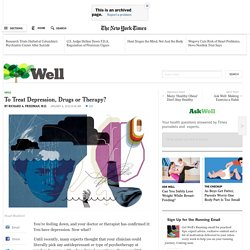 Now what? Until recently, many experts thought that your clinician could literally pick any antidepressant or type of psychotherapy at random because, with a few clinical exceptions, there was little evidence to favor one treatment over another for a given patient. In fact, I used to delight in tormenting the drug company representatives when they asked me how I picked an antidepressant. Misunderstood Minds . Basics of Math. Mathematics is often thought of as a subject that a student either understands or doesn't, with little in between. 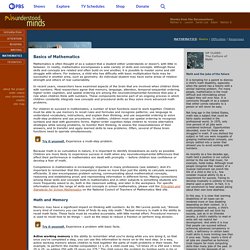 In reality, mathematics encompasses a wide variety of skills and concepts. Although these skills and concepts are related and often build on one another, it is possible to master some and still struggle with others. The prospects of working memory training for improving deductive re... The neuropsychological contributors to psychopathic personality tra... 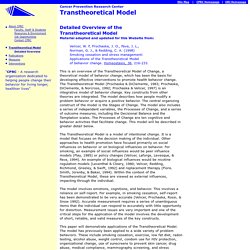 The Aging Brain - Week by Week Time Lapse. Central Sleep Apnea Medical Course. 5 Video Simulations to Help You Experience Autism Highlighted by Mashable. April 25, 2014 (April 25, 2014) -- This week, Mashable came out with an article called "5 Autism Simulations To Help You Experience Sensory Overload. " The article explains that many individuals with autism are creating these videos to help our society understand some of the things people with autism experience. Our very own Dr. Symptoms and Diagnosis. Deciding if a child has ADHD is a several-step process. There is no single test to diagnose ADHD, and many other problems, like anxiety, depression, and certain types of learning disabilities, can have similar symptoms.

It includes intellectual deficits and difficulty functioning in daily life in areas such as communication, self-care, home living, social/interpersonal skills, self-direction, academics, work, leisure, health, and safety. Intellectual disability has many different etiologies and may be seen as a final common pathway of various pathological processes that affect the central nervous system. Prior to the publication of DSM-5 in 2013, diagnostic criteria for Mental Retardation required that an individual score ~2 standard deviations below their expected IQ compared to same-age-peers on standardized IQ tests (Full Scale Intellectual Quotient ≤ 70). In the DSM-5, IQ scores have been deemphasized.

How Meth Destroys The Body. Bath Salts 'Zombie' Drug This video contains graphic images. What are the best videos to watch of people on drugs? Please post links! : Drugs. The toxicology of bath salts: a review of synthetic cathinones. Neuropsychopharmacology - Psychoactive /`Bath Salts/': Compounds, Mechanisms, and Toxicities. Neuroscientists Demonstrate Direct Brain-to-Brain Communication in Humans. Interviewing Four Mental Patients With Schizophrenia. The Photoshop Effect: Part 2 Controversy. The Case For An Older Woman. Women have stronger orgasms if their partner is funny and if their family are rich. Researchers interviewed female students in committed relationshipsThey were asked to rate how often they reached orgasm during sex This was compared to their partner’s family income, self-confidence and attractivenessFrequency was related to intensity as well as their partner’s personalitySexual satisfaction was strongly related to looks and shoulder breadthA partner's self-confidence and family income also predicted how often the women instigated sex.