Skin Health and the Gut Microbiome

7 Tips for Quick Eczema and Itchy Skin Relief - Guest Post by Jennifer Roberge ~ The Paleo Mom. Itchy, irritated skin is no fun at all. 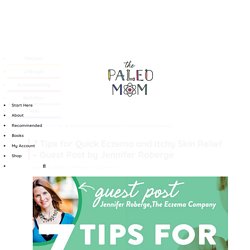 When you feel the need to scratch, it’s like your hands are on autopilot. There is almost no reasoning with them as they attempt to provide you with some sort of relief by scratching. It feels good for a while but then, uh oh, you’ve made your skin worse and then you’re itchy once again! Welcome to the infamous itch-scratch cycle that is notoriously hard to break for both adults with eczema and for parents of children with eczema. So just how do you find itchy skin relief? Look at the diet and eczema connection. If you determine that food is contributing to your flare-ups, great! Because internal healing can take a long time – months to years – it’s critical to find ways to relieve your skin in the short term. Here are 7 Tips for Quick Eczema and Itchy Skin Relief: What's Living on Your Skin? The average human body has about 1.2 square meters of skin. 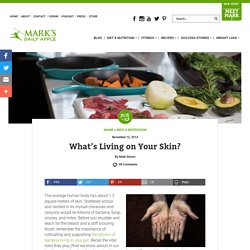 Eczema - The Paleo Mom. What is Eczema? 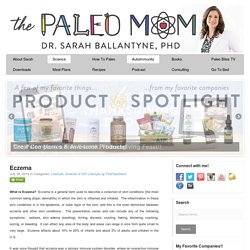 Eczema is a general term used to describe a collection of skin conditions (the most common being atopic dermatitis) in which the skin is inflamed and irritated. The inflammation in these skin conditions is in the epidermis, or outer layer of the skin, and this is the main distinction between eczema and other skin conditions. The presentation varies and can include any of the following symptoms: redness, skin edema (swelling), itching, dryness, crusting, flaking, blistering, cracking, oozing, or bleeding.

It can affect any area of the body and areas can range in size from quite small to very large. Eczema affects about 10% to 20% of infants and about 3% of adults and children in the U.S. It was once thought that eczema was a primary immune system disorder, where an overactive immune system, led by a type of white blood cell called T-Cells, responded to environmental factors by initiating an inflammatory response. 4 Tips to Combat Eczema - The Paleo Mom. Eczema is a tricky condition that affects an estimated 10-20% of infants in the U.S. 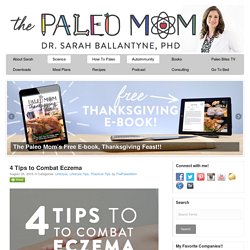 And, though it’s less common in adults (only about 3% of American adults have eczema), chances are we’ve all met someone with this condition. Eczema, also called atopic dermatitis, is a chronic condition characterized by inflammation of the epidermis (the outermost layer of skin). This inflammation, at its heart an immune reaction, can present itself in the form of a multitude of symptoms, including: redness, swelling, itching, dryness, crusting, flaking, blistering, cracking, oozing, or bleeding.

Someone with eczema might experience it on any place in the body, and it can manifest as almost any size on the skin. Asthma, Eczema and the microbiome. “. 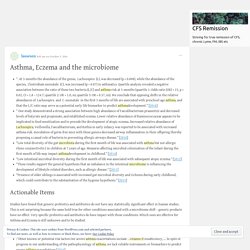 Eczema & L. Plantarum Success Stories. Thought I’d do a roundup of some of the reader reports that popped up throughout the past month… After not achieving any success with the standard dermatological approaches, Mary has cleared up her eczema completely using the L. plantarum probiotic: Thank you for the advice on taking probiotics for eczema. 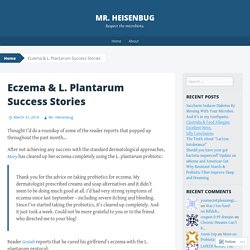 My dermatologist prescribed creams and soap alternatives and it didn’t seem to be doing much good at all. I’d had very strong symptoms of eczema since last September – including severe itching and bleeding. Since I’ve started taking the probiotics, it’s cleared up completely. Eczema & Probiotics: Personal Update, Reader Reports, and the Respiratory Connection. Good news: my hand eczema is back! 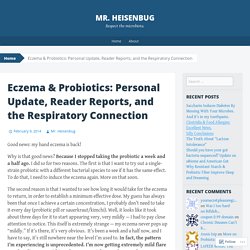 Why is that good news? Because I stopped taking the probiotic a week and a half ago. I did so for two reasons. The first is that I want to try out a single-strain probiotic with a different bacterial species to see if it has the same effect. To do that, I need to induce the eczema again. The second reason is that I wanted to see how long it would take for the eczema to return, in order to establish a minimum effective dose. I never imagined I’d be broadcasting my daily hand eczema updates to the world, but there you have it.

In the last post, I noted that reader reports reflected a very clear pattern: slow but noticeable improvement. I don’t care for sauerkraut much. Again, slow but noticeable improvement with fermented foods. Patient 1 recovered from the asthma and cold, and likewise the (likely) new patch of eczema went away. Wilbur plans to try the probiotic pill in a second family member, who did not seem to get results from the foods. New study suggests S. aureus and skin dysbioses cause eczema — The American Microbiome Institute. Atopic dermatitis, also known as eczema, is a skin inflammation and rash that has an enigmatic cause. 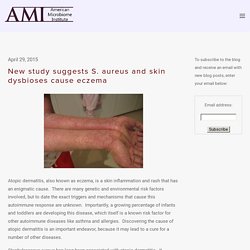 There are many genetic and environmental risk factors involved, but to date the exact triggers and mechanisms that cause this autoimmune response are unknown. Importantly, a growing percentage of infants and toddlers are developing this disease, which itself is a known risk factor for other autoimmune diseases like asthma and allergies. A population based study of S. aureus colonization in infants for atopic eczema — The American Microbiome Institute. Atopic eczema (AE) is a skin condition that is often measured by transepidermal water loss (TEWL), a mark of dry skin. 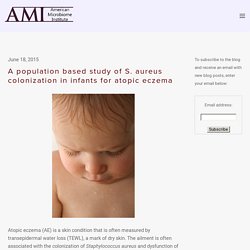 The ailment is often associated with the colonization of Staphylococcus aureus and dysfunction of the skin barrier (a few months ago we had a long blog post about atopic eczema and S. aureus so if you're interested in this topic, take a look at that post as well). A group of scientists in Oslo set out to find if whether S. aureus colonization in the nasal cavity or the back of the mouth, the fauces, led to increased TEWL in healthy infants and those with eczema. They also set out to identify if TEWL on the upper arm and forearm provide similar associations between TEWL and atopic excema. In the study published in PLoS One, 240 infants were enrolled and 167 of them met the requirements. Atopic dermatitis associated gut microbe identified — The American Microbiome Institute. The researchers measured the gut microbiomes of 132 people, including 90 of which had atopic dermatitis and were seeking medical treatment. 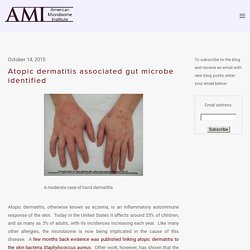 They also measured gene expression by bacteria in the gut, and short chained fatty acids (SCFAs) in the guts of all the individuals. They discovered that one particular bacterial species was much more abundant in dermatitis patients compared to controls, Faecalibacterium prausnitzii. Synbiotics emerge as a useful tool for treating atopic dermatitis - Gut Microbiota for Health. A recent meta-analysis of randomised clinical trials (RCTs), led by Dr Maria García-Romero from the National Institute of Pediatrics in Mexico, supports the use of synbiotics for the treatment of atopic dermatitis (AD). The prevalence of atopic diseases in Western countries is showing a dramatic increase. Recent epidemiological studies and experimental research suggest that gut microbiota may have a role in the development of atopic disorders. As such, prebiotic and probiotic supplements have been tested for primary prevention and/or treatment of AD.

Until now, the results of isolated trials and meta-analyses using probiotics and prebiotics to prevent or treat AD have been inconsistent. Synbiotics are products that contain both probiotics and prebiotics and have also been used for either prevention or treatment of AD, but results are inconsistent. The most relevant results are summarised below: Reference: Emidermolysis bullosa, a severe skin disorder, may be influenced by skin microbiome — The American Microbiome Institute. Epidermolysis bullosa (EB) is a terrible hereditary disease that results in blistering skin and can become so severe that the skin falls off the body (I highly recommend that you do not search for images of the disease, really).

Severity levels vary but this disease can be lethal and the age of death is often very young. While recently many stem cell research advancements have been made bringing new treatments to young patients, treatments for the disease are lacking and a full understanding of the disease is not complete. Acne And The Gut Brain Skin Axis. Antimicrobial peptide can reduce acne infection in mice — The American Microbiome Institute. Chances are you have experienced some form of acne, or know someone who has. Also known as Propionibacterium acnes (P. acnes), these gram-positive bacteria drive the pathogenesis of what we commonly refer to as acne. The bacteria aggregate in high numbers on the skin in areas such as hair follicles.

When bacteria density gets too high, the innate immune system reacts, resulting in a battery of proinflammatory signals and/or reactions. Current treatments include both topical and oral antibiotics, but these therapies collectively have shown minimal efficacy at the expense of some side effects. A new drug from the microbiome may someday treat acne — The American Microbiome Institute. One of the most prevalent diseases caused by our microbiome is acne. As many people know, those little red pimples are caused by an immune response to the otherwise normal skin bacterium, Propionibacterium acnes. Many treatments for acne use broad spectrum oral antibiotics to eliminate the bacteria, which we at the AMI discourage for reasons we have blogged about before. New research suggests that another common microbiome bacterium, Helicobacter pylori, may have utility in fighting P. acnes and preventing acne.

Research recently published by the British Journal of Dermatology investigated the effects of using a peptide made from the microbiome bacterium Helicobacter pylori to reduce levels of P. acnes and to decrease the immune response to these bacteria. The researchers discovered that the peptide, known as HPA3NT3, was quite effective in destroying various strains of P. acnes.

Episode 9 of The Microbiome Podcast: The skin microbiome and AOBiome with Dr. Larry Weiss — The American Microbiome Institute. On the ninth episode of The Microbiome Podcast, we talked with Dr. Larry Weiss, Chief Medical Officer of AOBiome. AOBiome is a leading company based in Cambridge, MA that is developing treatments for inflammatory skin conditions. Transforming human health through the restoration of Ammonia-Oxidizing Bacteria.