Before the Boom. Paul Slocum, Transformer Fire (2008) For its blockbuster sale of Beeple’s Everydays: The First 5000 Days, an artwork in the form of an NFT and a digital file comprising thousands of images, Christie’s auction house published an essay including the following dubious claim: Digital art has an established history dating back to the 1960s. 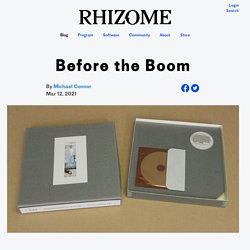 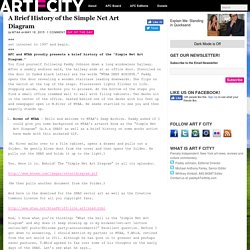 You find yourself following Paddy Johnson down a long windowless hallway. After a seemly endless walk, the hallway ends at an office door. Stenciled on the door in faded black letters are the words “MTAA DEEP ACHIEVE.” Paddy opens the door revealing a wooden staircase leading downwards. (M. Yes. (He then pulls another document from the folder.) And here is the download for the SNAD vector art as well as the Creative Commons License for all you copyright fans. Now, I know what you’re thinking: “What the hell is the ‘Simple Net Art Diagram’ and why does it keep showing up in my browser/net-art lecture series/AFC posts/Rhizome party-announcements?”

(M.River holds up a thin yellowed sheet of paper, you read…) Simple Net Art Diagram: A Secret History. He Art of the Internet, Restored and Out in the World. Your browser isn't supported. When you can produce an image or an effect with the push of a button, it usually gets old quick. 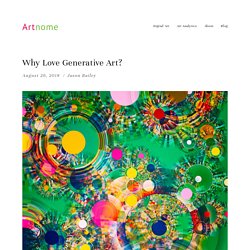 So it is not hard to imagine that we will see something akin to the tsunami of images with Photoshop filters we were inundated with in the early ‘90s. In fact, Valenzuela is building a tool suite not unlike Photoshop, but leveraging AI to democratize the new tools for artists and designers. I'm not going to lie, I want to be first in line to play with it. As AI technology becomes increasingly available, artistry and technical advancement will only become more important in separating the remarkable AI artists from those repurposing old tools built by others or simply pushing a button to achieve an overused visual paradigm. 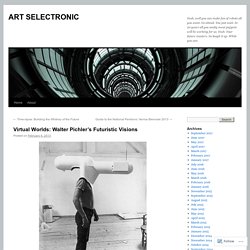 The materials (polyester, Plexiglas, PVC, aluminum, inflatable elements) used by the Austrian artist were new at the time. Around forty-five years ago a man wore a submarine-like white helmet that extended from front to back. His entire head disappeared into the futurist capsule; only the title betraying what was happening. TV Helmet created in 1967 is a technical device that isolates the user while imbedding him or her in an endless web of information: closed off against the outside world, the wearer was completely focused on the screen before his eyes.

TV Helmet is the work of Walter Pichler and it doesn’t merely formally anticipate the cyber glasses developed decades later; Pichler also articulated questions of content in relation to the media experience long before the “virtual world” was even discovered. PAINTING BY NUMBERS: THE ART OF LILLIAN SCHWARTZ by Rebekah Rutkoff. Lillian Schwartz, Pixillation, 1970, 16 mm, color, sound, 4 minutes. © Lillian F. 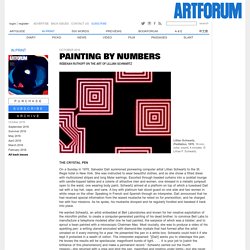 Schwartz. On a Sunday in 1970, Salvador Dalí summoned pioneering computer artist Lillian Schwartz to the St. Regis hotel in New York. She was instructed to wear beautiful clothes, and so she chose a fitted dress with multicolored stripes and long Mylar earrings. Escorted through beaded curtains into a cocktail lounge with candle-topped tables and a coterie of attractive men and women, one dressed in a metallic jumpsuit open to the waist, one wearing body paint, Schwartz arrived at a platform on top of which a tuxedoed Dalí sat with a top hat, cape, and cane. Slide for Lillian Schwartz’s Proxima Centauri, 1968. © Lillian F. Dalí’s unwillingness to credit Schwartz fits a pattern. The dilemma of status had trailed Schwartz since her arrival. To Schwartz, open-doored Bell Labs was “a masterpiece of odd geniuses” (overwhelmingly male), “the true heaven of thought and research.” 1. 2. 3. 4. 5.

How the Cyberfeminists Worked to Liberate Women through the Internet. Cyberfeminism resisted easy definition and, as the manifesto showed, there were multiple iterations and conflicting notions of what it was—and was not. 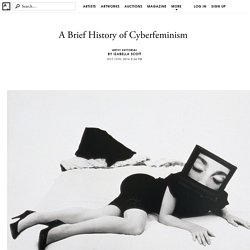 By 1997, the movement was running into trouble. Haraway and Butler’s texts had called for the dissolution of gender and racial hierarchies, but it was increasingly clear that cyberfeminism had failed to address race at all. What’s more, the notion that the internet could be employed as a categorically liberated space proved to be too optimistic.