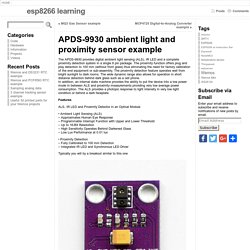 The proximity function offers plug and play detection to 100 mm (without front glass) thus eliminating the need for factory calibration of the end equipment or sub-assembly. The proximity detection feature operates well from bright sunlight to dark rooms. The wide dynamic range also allows for operation in short distance detection behind dark glass such as a cell phone. In addition, an internal state machine provides the ability to put the device into a low power mode in between ALS and proximity measurements providing very low average power consumption.

The ALS provides a photopic response to light intensity in very low light condition or behind a dark faceplate Features ALS, IR LED and Proximity Detector in an Optical Module • Proximity Detection – Fully Calibrated to 100 mm Detection – Integrated IR LED and Synchronous LED Driver Connection Code Links. X-Project (ESP8266 & ESP32) Starter Kit. Although makers/hackers/DIY enthusiasts have been around since man invented the wheel — or perhaps even before — it seems that a big part of what’s fueled the current crop of home invention has been inexpensive development boards like those developed by Arduino. 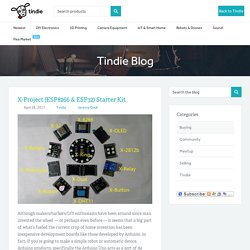 In fact, if you’re going to make a simple robot or automatic device, Arduino products, specifically the Arduino Uno acts as a sort of de facto standard. Lucadentella.it. ESP32 CAN CAN board!! from microwavemont on Tindie. IOT Expert - Engineering for the Internet of Things. From Kickstarter to Home Depot: Edyn smart garden sensor brings IOT to your garden. The emerging Internet of Things (IOT) is enabling the use of smart devices, such as Edyn, in surprisingly down-to-earth places. 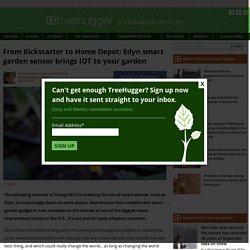 And because this crowdfunded smart garden gadget is now available on the shelves of one of the biggest home improvement stores in the U.S., it's not just for early adopters anymore. One of the most entertaining parts of covering technology and gadgets is reading the press releases and pitches from startups that are convinced that they've built the next best thing, and which could really change the world... as long as changing the world consisted of turning your phone into a remote control for your lights, or turning your trash can into your grocery list maker.

The Edyn sensor is a solar-powered device that measures soil moisture, pH, temperature, humidity, light levels, and soil nutrient levels, in both real-time and over the long term, helping gardeners to accurately assess what their soil needs in order to support strong healthy plant growth. Computers + Electronics + LEGO. How to control a Window Blind using IOT enabled hardware (Part 1) This is part one of a series of articles where I will be showing you how to create a home automation system using Components and hardware which can be purchased from the RS Components website. 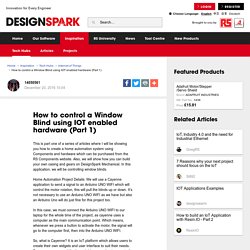 Also, we will show how you can build your own casing and gears on DesignSpark Mechanical. In this application, we will be controlling window blinds. Home Automation Project Details: We will use a Cayenne application to send a signal to an Arduino UNO WIFI which will control the motor rotation, this will pull the blinds up or down. It’s not necessary to use an Arduino UNO WIFI as we have but also an Arduino Uno will do just fine for this project too. In this case, we must connect the Arduino UNO WIFI to our laptop for the whole time of the project, as cayenne uses a computer as the main communication point. 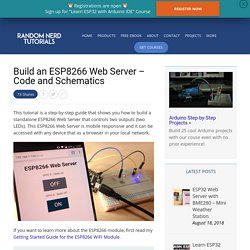 In this project you’ll create a standalone web server with an ESP8266 that can toggle two LEDs. First, watch the video demonstration below Why flashing your ESP8266 module with NodeMCU? NodeMCU is a firmware that allows you to program the ESP8266 modules with LUA script. And you’ll find it very similar to the way you program your Arduino. ChromaTab — a Slick Little WS2812B LED Controller. Getting Started with NodeMCU Board Powered by ESP8266 WiSoC. Since ESP8266 is now so popular, I’ve recently bought a NodeMCU board to try it. 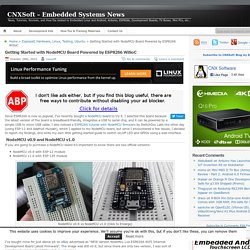 I selected this board because the latest version of the board is breadboard-friendly, integrates a USB to serial chip, and it can be powered by a simple USB to micro USB cable. I also noticed a ESP8266 tutorial with NodeMCU firmware by SwitchDoc Labs the other day (using ESP-12 and Adafruit Huzzah), which I applied to my NodeMCU board, but since I encountered a few issues, I decided to report my findings, and write my own little getting started guide to switch on/off LED and GPIOs using a web interface. NodeMCU v0.9 and NodeMCU v1.0. Hackerspace / ESP8266. Some of this info is available elsewhere on the web, some is (as far as I know) not documented elsewhere. 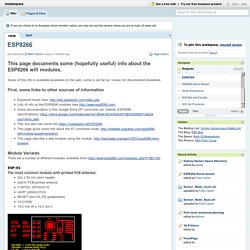 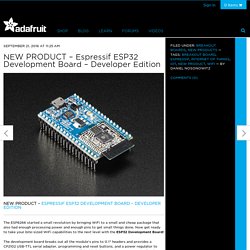 Enginursday: First Impressions of the ESP32. An overview of Espressif's sequel to the ESP8266 - a new WiFi/Bluetooth-enabled system-on-chip, with a massive GPIO count. 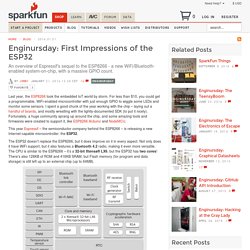 Favorited Favorite 3 Last year, the ESP8266 took the embedded IoT world by storm. For less than $10, you could get a programmable, WiFi-enabled microcontroller with just enough GPIO to wiggle some LEDs and monitor some sensors. I spent a good chunk of the year working with the chip – laying out a handful of boards, and mostly wrestling with the lightly-documented SDK (to put it nicely). WeatherBug: ESP8266 WeatherStation with IFTTT and HomeKit support. I assume you're familiar with Daniel Eichhorn's ESP8266 Weather Station. 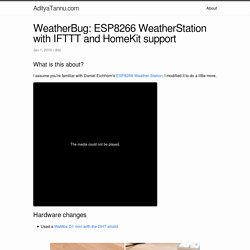 I modified it to do a little more. Hardware changes Used a WeMos D1 mini with the DHT shield Software changes. ESP8266: Weather Station V2 Code published. This is a total make over of the earlier weather station. Instead of building my code on the NodeMCU lua firmware I decided to switch to the Arduino IDE based development setup. The reason for this was the constant problems with heap memory running out and other instabilities. When I finally found code that demonstrated the use of my beloved SSD1306 based OLED 128×64 displays the final piece was in place. I tried to separate the building blocks of the code into different classes, so they can be reused easiley for other purposes.

Hologram - Cellular Connectivity for the Internet of Things. A very cheap ESP8266 WiFi smart car controlled by phone based on NodeMCU. DoitCar is designed and developed by Shenzhen Doctors of Intelligence & Technology (SZDOIT), which is the most cost-effective. It is widely applied in many fields, sucha as the electronic lover, college students, Internet of Things (IoT), mobile data collection, etc. DoitCar has a great temptation for the smart car solution. The DoitCar kit is including the car chassis, 2 pieces of 6V motors, NodeMCU WiFi board, motor driven shield board.

Especially, all the codes and hardwares are open for all people. Internet Of Things - ThingSpeak. Solar-Powered IoT Device Kit. Z-wavelabs. The Ultimate IoT Challenge Using ARTIK Cloud. Full rules Eligibility criteria: Contestants must (a) be at least 16 years of age, (b) be a resident of a country other than Cuba, Iran, North Korea, Sudan or Syria, (c) not be involved in the execution or administration of the Contest, and (d) not be an employee (or the immediate family member or a household member of an employee) of Hackster.io, or Samsung Semiconductor, Inc.

(“Samsung”) or a Samsung affiliate. ARTIK. GET A NEW PERSPECTIVE ON loT. Rethink how you get to market with the Samsung ARTIKTM loT ecosystem. Samsung ARTIK is the end-to-end, integrated loT platform that transforms the process of developing, launching, and managing loT products. With a flexible, open ecosystem, from silicon totools to cloud, plus an extensive array oftechnology partners, you can shorten yourdevelopment cycle to a degree you never thoughtpossible. Learn more about Samsung ARTIK > Samsung ARTIK Cloud is an open data exchange platformdesigned to connect all devices. MKR1000. We create products and services for a connected world. UbIQio. Home. Library Example.

Blynk. Home - Punch Through Design. Nanode w/Sketchgarden Bootloader - Program Over the Internet. Contiki: The Open Source Operating System for the Internet of Things. Anything to do with gadgets – the stuff that gets me up in the morning full of enthusiasmScargill's Tech Blog. An open-source firmware based on ESP8266 wifi-soc. Build Your Own: Tools for sharing - Crafts Council. 15 Predictions for Tech and Design in 2015. It’s our favorite time of year, when frogs from around the world examine the state of technology’s future. Below you’ll find 15 declarations and projections from experts whose work continually advances the human experience.

This compilation forecasts a few of our expectations for the future, and we look forward to your feedback as we collectively consider what is to come. frog About A global product strategy and design firm that solves problems, anticipates the future, and advances the human experience for Fortune 500 clients. Move Over, Step Counters by Allison Green Schoop Fitness technology startups are primed to shake up the health and fitness wearable industry, offering true insights and recommendations for athletic training. 3D, pressure, and motion sensors are being integrated to assess form, movement quality, and muscular exertion to automatically log your workouts and provide real-time recommendations to prevent injury and improve training. Ambient Intelligence Knows What’s Up. IoT.