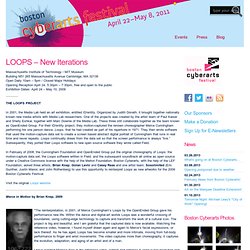 Organized by Judith Donath, it brought together nationally known new media artists with Media Lab researchers. One of the projects was created by the artist team of Paul Kaiser and Shelly Eshkar, together with Marc Downie of the Media Lab. These three still collaborate together as the team known as OpenEnded Group. For their ID/entity project, they motion-captured the renown choreographer Merce Cunningham performing his one person dance, Loops, that he had created as part of his repertoire in 1971. 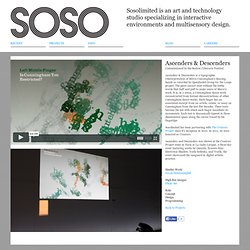 The piece cannot exist without the feeble words that huff and puff to make sense of Merce's work. It is, in a sense, a Cunningham dance work reconstructed from textual deconstructions of other Cunningham dance works. Each finger has an associated excerpt from an article, review, or essay on Cunningham from the last five decades. These texts become the ink with which each finger manifests its movements. Sosolimited has been partnering with The Creators Project since it's inception in 2010. Ascenders and Descenders was shown at the Creators Project event in Paris at La Gaite Lyrique.

Loops (2001-11) Loops is an abstract digital portrait of Merce Cunningham that runs in real time and never repeats. 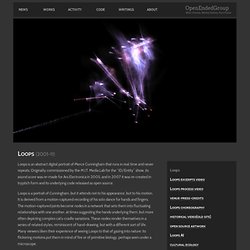 Originally commissioned by the M.I.T. Media Lab for the “ID/Entity” show, its sound score was re-made for Ars Electronica in 2005, and in 2007 it was re-created in tryptich form and its underlying code released as open source. Loops is a portrait of Cunningham, but it attends not to his appearance, but to his motion. It is derived from a motion-captured recording of his solo dance for hands and fingers. The motion-captured joints become nodes in a network that sets them into fluctuating relationships with one another, at times suggesting the hands underlying them, but more often depicting complex cat’s-cradle variations. Just as Cunningham’s motions generate the imagery in Loops, we use his voice to generate the music.

"Loops" 2. "Loops"1. Dancing in digital immortality. The late choreographer Merce Cunningham (1919-2009) lives on in more ways than one. 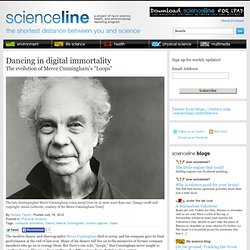 [Image credit and copyright: Annie Leibovitz, courtesy of the Merce Cunningham Trust] The modern dancer and choreographer Merce Cunningham died in 2009, and his company gave its final performance at the end of last year. Many of his dances will live on in the memories of former company members who go on to restage them. But there’s one solo, “Loops,” that Cunningham never taught to another dancer. This piece lives on through a different medium: digital motion capture. “Loops,” which Cunningham choreographed for himself in 1971, explores rotations of all kinds. In August of 2000, OpenEndedGroup, a trio of digital artists in New York City, affixed reflective markers to Cunningham’s hands and had him perform “Loops” in front of infrared cameras, which recorded the markers’ positions over time as a set of data points. OpenEndedGroup wrote software to interpret the data from Cunningham’s performance.

Merce Cunningham - Merce Cunningham Trust. MERCE CUNNINGHAM (1919-2009) was a leader of the American avant-garde throughout his seventy year career and is considered one of the most important choreographers of our time. 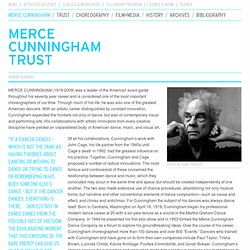 Through much of his life, he was also one of the greatest American dancers. With an artistic career distinguished by constant innovation, Cunningham expanded the frontiers not only of dance, but also of contemporary visual and performing arts. His collaborations with artistic innovators from every creative discipline have yielded an unparalleled body of American dance, music, and visual art. "If a dancer dances – which is not the same as having theories about dancing or wishing to dance or trying to dance or remembering in his body someone else’s dance – but if the dancer dances, everything is there. . . Our ecstasy in dance comes from the possible gift of freedom, the exhilarating moment that this exposing of the bare energy can give us.