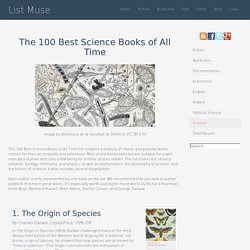 Most of the books selected are suitable for a well educated layman with only a few being for a more serious reader. The list covers the obvious subjects: biology, chemistry, and physics, as well as mathematics, the philosophy of science, and the history of science. It also includes several biographies. 10 philosophy books guaranteed to make you think differently.

Philosophy doesn’t have to be all Hegel and Frege, you know; like all disciplines, it might get finicky and complex for the layperson once you start scratching well below the crust, but above all else philosophy is about thinking deeply. 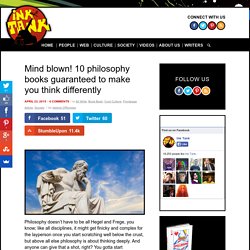 And anyone can give that a shot, right? You gotta start someplace, and in with a discipline that ranges from economics and politics to the nature of reality and the ethics of extreme sports, there’s a lot to choose from. So forget that you haven’t read everything from Plato to Žižec, and expand your mind with the 10 best philosophy books for deep thinking newbies. Simone de Beauvoir, The Second Sex (1949) Los 100 libros favoritos de David Bowie. Jack Kerouac entre su autores preferidos. Los 100 libros favoritos de David Bowie. 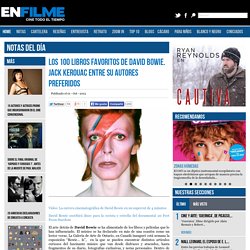 25 Best Far Future Science Fiction Books - The Best Sci Fi Books. Art by: ANTIFAN-REAL @ deviantART Far future science fiction (usually meaning about 10,000 years from now) is the most optimistic SF subgenre because it assumes humanity will still be around in some recognizable form. 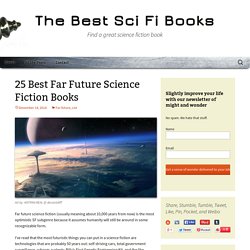 I’ve read that the most futuristic things you can put in a science fiction are technologies that are probably 50 years out: self-driving cars, total government surveillance, cyborgs a-plenty, Billy’s First Genetic Engineering Kit, and the like. In the list below, I’m defining “far future” to mean that the stories occur around 10,000 A.D. or later. The Twenty Science Fiction Novels that Will Change Your Life. 10 Thrilling Dystopian Titles You Probably Haven't Read. Nowadays, dystopian is the new vampire. 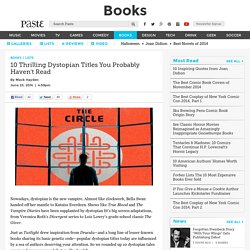 Almost like clockwork, Bella Swan handed off her mantle to Katniss Everdeen. Shows like True Blood and The Vampire Diaries have been supplanted by dystopian lit’s big screen adaptations, from Veronica Roth’s Divergent series to Lois Lowry’s grade-school classic The Giver. The Top 10 Best Science Fiction Books. Before the comments fill up with “Why didn’t you include this” and various slights against our personal and professional integrity, this is just a list of ten great science fiction novels, not in order, and by no means the top ten ever produced. 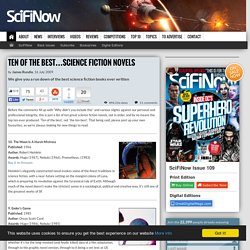 ‘Ten of the best’, not ‘the ten best’. That being said, please post up your own favourites, as we’re always looking for new things to read. 10. The Moon Is A Harsh MistressPublished: 1966 Author: Robert Heinlein Awards: Hugo (1967), Nebula (1966), Prometheus, (1983)Buy it on Amazon Heinlein’s elegantly constructed novel evokes some of the finest traditions in science fiction, with a near-future setting on the mongrel colony of Luna, which is preparing its revolution against the tyrannical rule of Earth. 9.

. | Kindle Edition. Books tagged eastern philosophy. Los 10 mejores libros de ciencia-ficción según el Times. 14 Brilliant Pieces of Literature You Can Read in the Time it Takes to Eat Lunch. The 50 Scariest Books of All Time. The air is getting crisper, the nights are getting longer, and All Hallow’s Eve draws near. 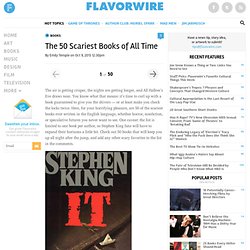 You know what that means: it’s time to curl up with a book guaranteed to give you the shivers — or at least make you check the locks twice. Here, for your horrifying pleasure, are 50 of the scariest books ever written in the English language, whether horror, nonfiction, or speculative futures you never want to see. One caveat: the list is limited to one book per author, so Stephen King fans will have to expand their horizons a little bit. Check out 50 books that will keep you up all night after the jump, and add any other scary favorites to the list in the comments. IT, Stephen King. 10 sci-fi novels that'll change how you look at the world forever. Call it SF, call it speculative fiction, call it slipstream – hey, we hear you can even call it structural fabulation. 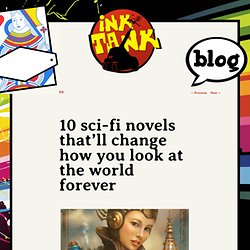 We’re not going to quibble on the nitty-gritty of nomenclature. What we do know is that these texts, however diverse, are yoked together by their reimaginings of reality – think parallel and sinister sister societies, alien worlds, or our own Earth, subtly altered. And the power of SF is that by lifting us into an alienating place or time, it allows us to see our own world differently. Below is a brief selection of our particular SF mind-blowing favourites. Feel free, as ever, to add more in the comments… 25 Books That Define Cool. 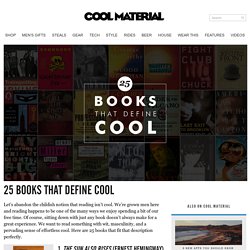 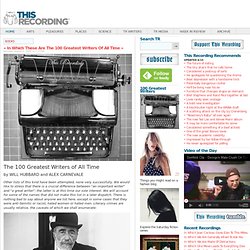 We would like to stress that there is a crucial difference between "an important writer" and "a great writer"; the latter is at this time our sole interest. We will account for some of the names that did not make this list in a later dispatch. There is nothing bad to say about anyone we list here, except in some cases that they were anti-Semitic or racist, hated women or hated men. 100. Prose stylist nonpareil, he addressed the dichotomy of race, the loneliness of existence. 99. The gestamtkunstwerk ('total work of art') was all the rage in Europe early in the last century, but Balzac was on the case almost a hundred years before. 10 Science Fiction Novels That Will Definitely Never Be Movies. By Charlie Jane Anders So they actually did it: They turned the sprawling, insane Cloud Atlas into a movie, one that actually makes the book look straightforward and uncontroversial.

It just goes to show, no matter how unconventional or sprawling a book is, there’s a way to adapt that sucker into a movie. Except sometimes, no. Top 100 Fiction. A contemporary list, with an international flavour and a respect for the classics, The Best Books: Top 100 Novels of All Time list contains many of the great works of fiction you'd expect, but with a few surprises to add a little spice to the collection.

Which books would you omit and which would you add to our list? Please let us know in the comments section below. 10 Book Series So Addictive, You Never Want Them to End. Best Alternate History Novels and Stories (204 books) 10 great science fiction novels that have been banned. @djscruffy: And that's why you're a heathen and should be burned at the stake. @djscruffy: In defense of public schools, I would suggest that the reason many of these books are challenged so often is that they're frequently included in school curriculums and libraries. I grew up in a state that, according to these links, engaged in book-burning less than a decade before my birth. That makes me shudder. But I'm also the child of a public school teacher and am familiar with my mother's and many of her peers' views on children's reading materials.

Phobos Entertainment's "100 Science Fiction Books You Just Have to Read" on Lists of Bests. Take my word for it; all science fiction books are not created equal. All right, don’t take my word for it. You’ll figure it out when you plow through packed bookstore shelves. You’ll realize soon enough that not every writer pens a tale worth reading. So just how does one find stellar SF? For starters, why don’t you try out these 100 narrative works. The Best Science Fiction and Fantasy Books of 2012. The Year's Best Science Fiction Crosses Galaxies And Genres. The 50 best books for kids (slide show) The Top 8 Unfilmable Novels You Want to See Filmed Anyway (Poll Results) Chances are, at some point in your life, you’ve finished a book, set it down, and said to yourself: man, I’d love to see a movie version of that — if it wasn’t totally impossible.

Some novels are just unfilmable — too complex, too unstructured, too far inside the heads of its characters, too suited to the written word. But if you’re a movie lover, there’s always that part of you that wants to see one anyway. So our latest poll posed a question: of a handful of the most famously “unfilmable” novels, which one would you really want to see made anyway? Below are the results — including explanations on why they’re deemed unfilmable, and what steps — if any — people have taken over the years to try to film them. 10 Science Fiction Novels You Pretend to Have Read (And Why You Should Actually Read Them)

10 Great Science Fiction Novels with Go-Back-To-Bed Depressing Endings. Kinja is in read-only mode. We are working to restore service. "In his quest he accidently unleashes monsters, slake moths, onto the city of Bas-Lag" Should be "city of New Crobuzon". Bas-Lag is the name of the planet. 10 Satirical Novels that Could Teach You To Survive the Future. SExpand An excellent novel that should definitely be on this list is Greg Costikyan's First Contract. The Amazon blurb gives the key points: An alien landing suddenly changes successful CEO Johnson Mukerjii's perfect life.

Japanese Folktales. Selected and edited by. 10 Weirdest Science Fiction Novels That You've Never Read. A syllabus and book list for novice students of science fiction literature. I was going to say that Dune has to be on the list but considering that this is a list for beginners it may be a little dense for newcomers. Is world building in general being left for the 200 level course? @go-falcons: As opposed to PK Dick or Gibson? Sci-Fi Lists - Top 100 Sci-Fi Books. The Best Science Fiction Books (According to Reddit)

Recently, someone asked Reddit for a list of the best science fiction books of all time. Being a fan of sci-fi, and wanting to expand my own reading list, I thought it would be helpful to tally the results and preserve them here for future reference. What if Dr. Seuss wrote The Call of Cthulhu? (UPDATED) List of paradoxes. SF Masterworks list. A Brilliant List of Science Books for People Who Want Their Minds Blown.

Related:  The Twenty Science Fiction Novels that Will Change Your Life   -  The Top 10 Best Science Fiction Books   -  25 Books That Define Cool   -  Top 100 Fiction   -  10 Book Series So Addictive, You Never Want Them to End   -  10 great science fiction novels that have been banned   -  10 Science Fiction Novels You Pretend to Have Read (And Why You Should Actually Read Them)   -  Japanese Folktales   -  Sci-Fi Lists - Top 100 Sci-Fi Books   -  The Best Science Fiction Books (According to Reddit)   -  List of paradoxes   -  A Brilliant List of Science Books for People Who Want Their Minds Blown   -  Best Utopian and Dystopian Fiction   -  Education   -  Enterprise