Home - Climate Action. Ipsen gender pay. These are the top 10 most gender-equal countries. Iceland has been the frontrunner on the Global Gender Gap Index for 11 years in a row. 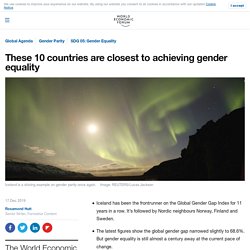 It’s followed by Nordic neighbours Norway, Finland and Sweden. The latest figures show the global gender gap narrowed slightly to 68.6%. Global Gender Gap Report 2020 - Reports - World Economic Forum. The Global Gender Gap Index was first introduced by the World Economic Forum in 2006 as a framework for capturing the magnitude of gender-based disparities and tracking their progress over time. 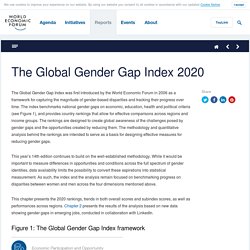 The index benchmarks national gender gaps on economic, education, health and political criteria (see Figure 1), and provides country rankings that allow for effective comparisons across regions and income groups. The rankings are designed to create global awareness of the challenges posed by gender gaps and the opportunities created by reducing them. The methodology and quantitative analysis behind the rankings are intended to serve as a basis for designing effective measures for reducing gender gaps. Our company - Ipsen. Research and development is a key element of our strategy, reflecting our commitment to improving patients’ lives and health outcomes. 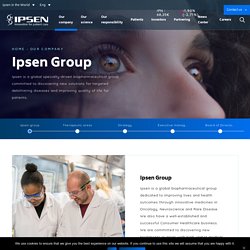 Our end goal is to ensure that we bring safe, effective and innovative medicines to market to address unmet patient needs as quickly as possible. We are proud of our valuable pipeline, encompassing both the lifecycle management of our established products and the development of new molecules including small molecules, neurotoxins, peptides and radiopharmaceuticals. We will secure our future by building a pipeline of innovative medicines, establishing our leadership position in our three core therapeutic areas and ensuring sustainable lifecycle management. We are focused on expanding our external innovation capabilities while continuing to focus on select in-house research. Women in Science program - Fondation Ipsen. Gender perspective has emerged especially in the last 20 years. 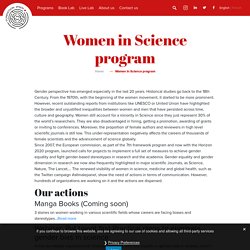 Historical studies go back to the 18th Century. From the 1970th, with the beginning of the women movement, it started to be more prominent. However, recent outstanding reports from institutions like UNESCO or United Union have highlighted the broader and unjustified inequalities between women and men that have persisted across time, culture and geography. Women still account for a minority in Science since they just represent 30% of the world’s researchers. Champions women in leadership and gender equality this International Women’s Day! - Ipsen. International Women’s Day is a great opportunity to celebrate our extraordinary female colleagues around the world! 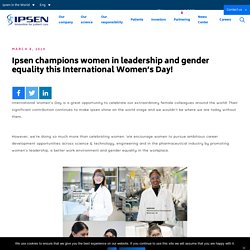 Their significant contribution continues to make Ipsen shine on the world stage and we wouldn’t be where we are today without them. However, we’re doing so much more than celebrating women. International Women’s Day 2020: For real equality! - Ipsen. ’s 2020 Gender-Equality Index Expands to Include 325 Public Companies Globally. Change Begins at the TopAccording to the findings from this year’s index, companies led by a female CEO reported having more women in senior management positions than companies with a male CEO. 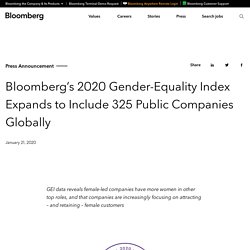 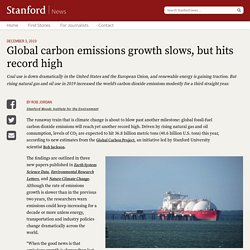 Driven by rising natural gas and oil consumption, levels of CO2 are expected to hit 36.8 billion metric tons (40.6 billion U.S. tons) this year, according to new estimates from the Global Carbon Project, an initiative led by Stanford University scientist Rob Jackson. A liquified natural gas tanker at dock. Because of greater supply and cheaper prices, natural gas usage has surged, accounting for 60 percent of fossil emissions growth in recent years. Fossil fuels and climate change: the facts. Fossil fuel companies spend millions on glossy ad campaigns about clean energy, while they continue to increase production of oil and gas, which release emissions that have a devastating impact on our planet. 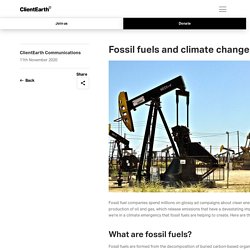 The science is clear – we’re in a climate emergency that fossil fuels are helping to create. Here are the facts: What are fossil fuels? Fossil fuels are formed from the decomposition of buried carbon-based organisms that died millions of years ago. They create carbon-rich deposits that are extracted and burned for energy. What is the impact of fossil fuels on our planet? FERC approves Kinder Morgan's Gulf LNG project. Federal regulators gave Houston's Kinder Morgan the green light to build its Gulf LNG export project in Mississippi, once again overcoming opposition from some Democrats concerned about LNG terminals' impacts on climate change. 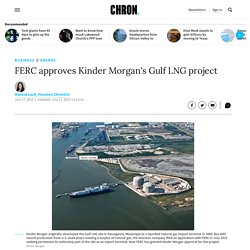 The Federal Energy Regulatory Commission approved the Gulf LNG project in a 3-1 vote Tuesday. Articles by Subject. Energy News. Where greenhouse gases come from. In the United States, most of the emissions of human-caused (anthropogenic) greenhouse gases (GHG) come primarily from burning fossil fuels—coal, hydrocarbon gas liquids, natural gas, and petroleum—for energy use. 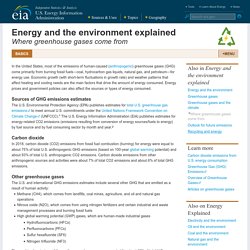 Thanks to a wide range of environmental policy measures, emissions of air pollutants in Europe decreased significantly over the last 29 years. Health effects of SO2, NOx and particulate matter - Environmental Justice Australia. Contact with sulfur dioxide or oxides of nitrogen can have dramatic health impacts. The below information is taken from www.npi.gov.au. Sulfur dioxide (SO2) Trends in Solid Waste Management. The world generates 2.01 billion tonnes of municipal solid waste annually, with at least 33 percent of that—extremely conservatively—not managed in an environmentally safe manner. Worldwide, waste generated per person per day averages 0.74 kilogram but ranges widely, from 0.11 to 4.54 kilograms.

Though they only account for 16 percent of the world’s population, high-income countries generate about 34 percent, or 683 million tonnes, of the world’s waste. Every person emits two tons of carbon dioxide a year through eating, Spanish study finds. Every person emits the equivalent of approximately two tonnes of carbon dioxide a year from the time food is produced to when the human body excretes it, representing more than 20% of total yearly emissions. That is what a study by the Universidad de Almería says, confirming for the first time that human excrements contribute to water pollution, primarily with nitrogen and phosphorus. A team of researchers from the Universidad de Almería (UAL) has estimated the environmental impact of the Spanish diet and role that human excrements play in the life cycle of food. It is the first time that a scientific study of this type incorporates the role played by human excrements.

Landfills: a serious problem for the environment.