8f/f5/27/8ff5272a5d24b94db1ba63f5dfdcd75d. IPSEN PAY GAP REPORT 2020. Gender pay gap in Europe: facts and figures (infographic) Although more women than men finish higher education in the EU, they are represented less on the labour market. 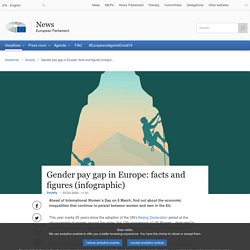 Almost 30% of women in the EU work part-time and they are much more likely to stop work to take care of children and relatives. The gender pay gap changes with age - it tends to be lower when people first start work and widens afterwards, although these patterns vary between countries. The gender pay gap also differs by industry, and in 2017 was higher in the private sector than in the public sector in the majority of EU countries. An important reason for the gender pay gap is the overrepresentation of women in relatively low paying sectors and underrepresentation in higher-paid sectors.

For example, on average in the EU in 2018, there were more male than female scientists and engineers - 59% compared to 41%. 2020 factsheet on the gender pay gap. The gender pay gap situation in the EU. Facts and figures Women in the EU are less present in the labour market than men. 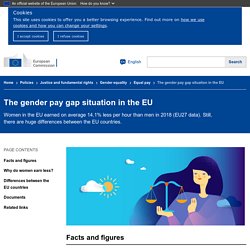 The gender employment gap stood at 11.7% in 2019, with 67.3 % of women across the EU being employed compared to 79% of men (EU27 data). The gender pay gap in the EU stands at 14.1% and has only changed minimally over the last decade. It means that women earn 14.1% on average less per hour than men. Women in the EU even earned 39.6% less than men overall in 2014. Why do women earn less? The reasons for the gender pay gap go beyond the simple issue of discrimination. Ipsen Pay Gap Report 2019. Gender Pay Gap Statistics for 2020. When looking at the gender pay gap statistics as fractions of a dollar, it can be difficult to understand the impact on earnings over a lifetime. 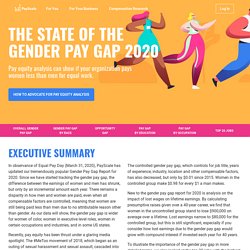 This is difficult in part because compensation over time for an individual is not static. Annual pay for individuals tends to increase over time. However, a rough calculation can be revelatory. For example, let’s assume the average woman starts working at age 22 and retires at age 62, a career of 40 years. Let’s also look at the median pay earned by women in 2020 for the uncontrolled group ($49,800) and the median pay earned by women in 2020 for the controlled group ($60,700) compared to men ($61,700). So how much do women lose over a 40-year career? We see that the average amount of money earned by women throughout their career is $900,000 less than that of men. The $900,000 gap in lifetime earnings is also just a rough calculation based on current trends. SimpleTruth 2. Gender Equality. The unfinished business of our time Women and girls represent half of the world’s population and, therefore, also half of its potential. 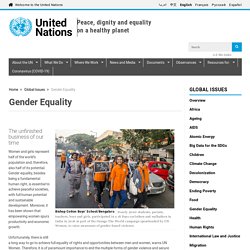 Gender equality, besides being a fundamental human right, is essential to achieve peaceful societies, with full human potential and sustainable development. Moreover, it has been shown that empowering women spurs productivity and economic growth. Unfortunately, there is still a long way to go to achieve full equality of rights and opportunities between men and women, warns UN Women. Therefore, it is of paramount importance to end the multiple forms of gender violence and secure equal access to quality education and health, economic resources and participation in political life for both women and girls and men and boys.

The UN Secretary-General, Mr. Global Gender Gap Report 2020. Why gender parity matters Gender parity has a fundamental bearing on whether or not economies and societies thrive. 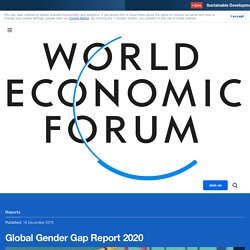 Developing and deploying one-half of the world’s available talent has a huge bearing on the growth, competitiveness and future-readiness of economies and businesses worldwide. The index’s rankings offer an effective means to benchmark progress. They are designed to create global awareness of the challenges that gender gaps pose, as well as the opportunities that emerge when action is taken to reduce them. Top 10 Political representation on the rise, but is it enough? Now in its 14th year, the Global Gender Gap Report 2020 benchmarks 153 countries on their progress towards gender parity in four dimensions: Economic Participation and Opportunity, Educational Attainment, Health and Survival and Political Empowerment. The report presents a decidedly mixed picture.

The “role model effect” reaps dividends at the top … … but not lower down Best in class Could do better. WEF GGGR 2020.