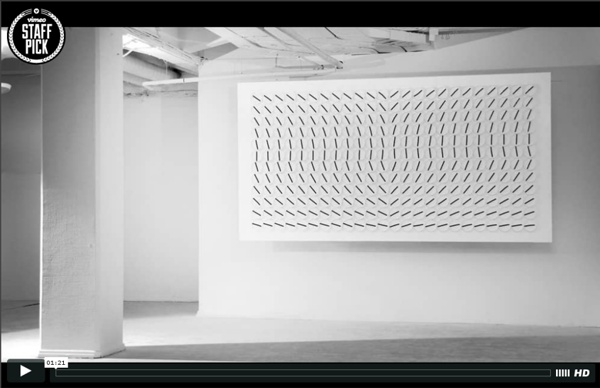 Animation clip-beautiful-RibA Miniature Apartment Buildings - Street Art by Evol City blocks, power boxes, walls and other public architecture transformed into miniature apartment buildings by Berlin-based street artist Evol. The artist uses stencils to create the gridded windows and balconies. Miniature Apartment Buildings – Street Art by Evol via mymodernmet Un pequeño pájaro! Morphogenetic Creations by Andy Lomas Created by a mathematician, digital artist and Emmy award winning supervisor of computer generated effects – Andy Lomas, Morphogenetic Creations is a collection of works that explore the nature of complex forms that can be produced by digital simulation of growth systems. These pieces start with a simple initial form which is incrementally developed over time by adding iterative layers of complexity to the structure. The aim is to create structures emergently: exploring generic similarities between many different forms in nature rather than recreating any particular organism. In the process he is exploring universal archetypal forms that can come from growth processes rather than top-down externally engineered design. Programmed using C++ with CUDA, the series use a system of growth by deposition: small particles of matter are repeatedly deposited onto a growing structure to build incrementally over time. Andy Lomas | lacda /via Golan and Pete Hawkes

CRAFTING HUMAN PERCEPTION / EXHIBITION « Francesca Perona Interactive installation that explores new ways of extending the natural bandwidth of human perception through computational textiles and sensors. The piece creates an immersive enviroment in which visitors rediscover tactile experiences and body awareness. The visitors encounter two panels and two pairs of head-phones hanging from the ceiling. Each panel has a pair of sleeves. By wearing them, the visitors will perceive in real time the sound resulting from their contact with the surface and touch experience. Sensors embedded in the textile surface record the vibration provoked by the touch and motion, amplified with a small circuit hidden in the panel. The crafted artwork helps the visitors to reconnect with their own body and perception, creating cognitive feedback loops between touch and sound. The surface itself has been designed with an experimental sound-led process, exploring the vibration produced by different materials and craft techniques.

Watch lune et l autre animated video on aniboom drime1 : Du duck tape pour ta duck face... Au Bout Du Monde - Konstantin Bronzit (1998).avi Hyphae | Hyphae Lamp The Hyphae lamp is a series of organic table lamps based on how veins form in leaves. Each lamp is a completely one-of-a-kind design 3D-printed in nylon plastic. The lamps are lit by eco-friendly LED's and cast dramatic branching shadows on the wall and ceiling. About Hyphae Hyphae is a collection of 3D printed artifacts constructed of rhizome-like networks. Inspired by the vein structures that carry fluids through organisms from the leaves of plants to our own circulatory systems, we created a simulation which uses physical growth principles to build sculptural, organic structures. Starting from an initial seed and a surface, we grow a hierarchical network where nodes constantly branch and merge. Lighting Specifications The lamp comes with an eco-friendly 3-watt 200 lumen LED light fixture with three bright Cree LED's that will last for 6 years of continuous use.

When Plants Jam with Synths: Leslie Garcia’s Open Project Lets Plants Talk with Sound Pulsu(m) Plantae _ project presentation from LessNullVoid on Vimeo. You may have seen a plant used as a musical instrument before, by measuring capacitance across the leafy life form and turning it into a touch sensor. This is something different: it’s letting the plant itself express communication through sound, using biofeedback to turn the living systems on the plant into something audible. It is a synth jam, made by a plant, that tells you something about what the plant is sensing about the world around it. From Tijuana, México, media artist and musician Leslie Garcia shares the latest iteration of her open hardware project, which builds on readily-accessible, open platforms to make a tool for learning and experimentation anyone might use. Images courtesy the artist. If you’re comfortable with Spanish, check out the project site. If you’re near México, in April, you can catch a workshop and installation version of the project in Oaxaca, for the Proyecta Festival.