How to Build the Perfect Wardrobe: 10 Basic Principles. Whether you are currently in the progress of refining your style and perfecting your wardrobe, or still a complete curating newbie: The number one thing you need is a strategy, a clear roadmap to steer you in the right direction, streamline your decision making and help you correct course should you slip up and find yourself lost again between bargains and seasonal must-haves. 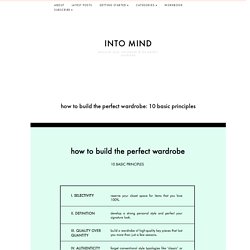 The ten principles above are a summary of my own strategy and the philosophy that all of the tools and techniques here on INTO MIND are based on. Use them to fine-tune your own set of guidelines, pinpoint your priorities and keep track of your progress! Here is a closer look at each of the principles: i. selectivity Aim to curate a wardrobe full of garments that you love, that inspire you and that make you feel excited about getting dressed each morning.

Japanese Artist Crafts Furniture That Looks Like Sketches. What are these kids doing inside this drawing? 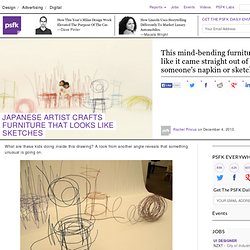 A look from another angle reveals that something unusual is going on. It’s not the kids who’ve been flattened to 2D photographs of themselves, it’s the chairs that have been realized as three-dimensional models. These fully functional pieces of furniture, a 2013 thesis project called “Rough Sketch Products” realized by Tokyo University of the Arts student Daigo Fukawa, look like they leapt straight from a napkin – or even someone’s mind – into the three-dimensional world. Though we can’t say how comfortable the seats are (they appear to be made out of wire), the effect is both visually stunning and humorous. 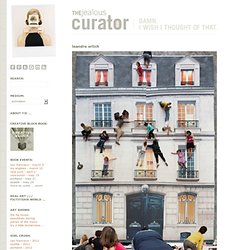 This 4-Year-Old Makes Paper Dresses With Her Mom. By Ilana Wiles, Mommy Shorts I started following @2sisters_angie a little over a year ago. 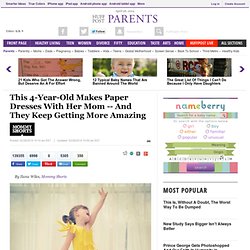 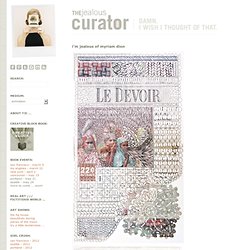 I think all I can muster is “my goodness”… ok, I’m going back to spend my weekend staring at the perfect, detailed, poetic cuts that she has made to this pile of yesterday’s headlines. Sigh. 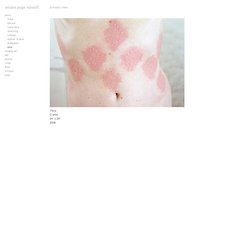 Dia Art Foundation - Sites. Christo and Jeanne-Claude. ‎www.asia.si.edu/explore/worlds-within-worlds/zoom/gulshan-album-back.asp. Wire Sketches. The Magic and Logic of Color: How Josef Albers Revolutionized Visual Culture and the Art of Seeing. By Maria Popova “A thing is never seen as it really is.” 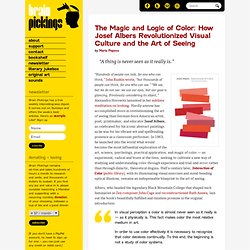 “Hundreds of people can talk, for one who can think,” John Ruskin wrote, “but thousands of people can think, for one who can see.” “We see, but we do not see: we use our eyes, but our gaze is glancing, frivolously considering its object,” Alexandra Horowitz lamented in her sublime meditation on looking. Variations on normal shop by Dominic Wilcox — Hill walking easyfication. AN AMLASH TERRACOTTA BULL RHYTON. A Chinese bronze jue vase, Ming Dynasty. Canopic vase. Weight Vases by Decha Archjananun. Thai designer Decha Archjananun has made a series of vases with concrete bases to hold water and wire frames to support flower stems. 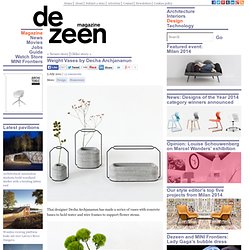 The concrete parts sit within each steel frame and weigh the pieces down to prevent them toppling over. Called Weight Vases, the collection comprises different shapes for different types of flower arrangement. Archjananun developed the project while studying at the Ecole Cantonale d’art de Lausanne (ECAL). More vases on Dezeen » Here's some text from the designer: Énochien. Un article de Wikipédia, l'encyclopédie libre. 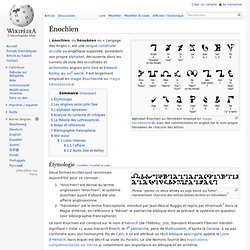 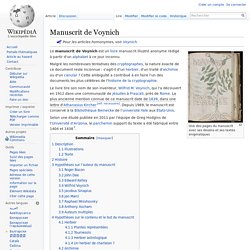 Pour les articles homonymes, voir Voynich. 3D Printed Guns (Documentary) Nendo adapts Japanese paper-making to make Semi-Wrinkle Washi lamps. Cubify launches 3D printed shoes you can print overnight. News: designer Janne Kyttanen has created a range of 3D-printed shoes for women that can be made at home overnight to be worn the next day. Kyttanen, creative director at printing giant 3D Systems, has created four different styles of wedge shoes that can be made using 3D Systems' CubeX printer. Consumers can download the free digital files for the shoes, select the size they require and print them in a colour of their choice. The project is intended to attract new audiences to 3D printing, which has tended to be dominated by products aimed at men. "I don't know what it is with women and shoes, but I like it," said Kyttanen, in a press release straight out of Mad Men. "I would like it even better if my girlfriend could wear a different pair every single day.

Each shoe takes upwards of six or seven hours to print, meaning a pair could be produced overnight, assuming two shoes could be printed simultaneously on one printer. Continuum Fashion : N12 bikini. The N12 bikini is the world's first ready-to-wear, completely 3D-printed article of clothing. All of the pieces, closures included, are made directly by 3D printing and snap together without any sewing. N12 represents the beginning of what is possible for the near future. N12 is named for the material it's made out of: Nylon 12. This solid nylon is created by the SLS 3D printing process. Shapeways calls this material "white, strong, and flexible", because its strength allows it to bend without breaking when printed very thin.

The bikini's design fundamentally reflects the beautiful intricacy possible with 3D printing, as well as the technical challenges of creating a flexible surface out of the solid nylon. The Toaster Project. I'm Thomas Thwaites and I'm trying to build a toaster, from scratch - beginning by mining the raw materials and ending with a product that Argos sells for only £3.99.

A toaster. After some research I have determined that I will need the following materials to make a toaster. Copper, to make the pins of the electric plug, the cord, and internal wires. Iron to make the steel grilling apparatus, and the spring to pop up the toast.

Immaterials: light painting WiFi. “The complex technologies the networked city relies upon to produce its effects remain distressingly opaque, even to those exposed to them on a daily basis.” – Adam Greenfield (2009) Immaterials: light painting WiFi film by Timo Arnall, Jørn Knutsen and Einar Sneve Martinussen. This project explores the invisible terrain of WiFi networks in urban spaces by light painting signal strength in long-exposure photographs. A four-metre tall measuring rod with 80 points of light reveals cross-sections through WiFi networks using a photographic technique called light-painting. This builds on a technique that was invented for the 2009 film ‘Immaterials: the Ghost in the Field’ which probed the edges of the invisible fields that surround RFID readers and tags in the world. 100 Things Every Designer Needs to Know About People (Voices That Matter): Susan Weinschenk: 9780321767530: Amazon.com.

New Cyanometer. New Cyanometer2009 A cyanometer (gr., cf. cyan) is an instrument for measuring the blueness,specifically the color intensity of blue sky. It is attributed to Horace-Bénédict de Saussure and Alexander von Humboldt. The blueness of the atmosphere indicates transparency and the amount of water vapour. The New Cyanometer developed by the Institute of General Theory is based on the CMYK color scale and was improved to a resolution of 64k. A Cyanometer to Measure the Blueness of the Sky - AnOther's Lovers. This summer, the warmest in a long time, we have been particularly lucky in the number of blue sky days we've seen. Innovation & Design. Design Observer. Observatory By Manuela AguirreDesign for Care: Innovating Healthcare Experience, is one of the first books fully dedicated to health care design and comes at a critical moment given the degree to which design is starting to be acknowledged as a legitimate profession within the context of health care institutions.

Places Nicole Huber & Ralph Stern Born in Germany in 1945, just months after the end of World War II, the film director Wim Wenders sought to make sense of the "ruin landscapes" of the nation's cities through personal and professional exploration of the wide-open landscapes of the American West. Architecture and design magazine.