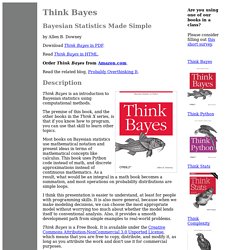 Bayesian Methods for Hackers. An intro to Bayesian methods and probabilistic programming from a computation/understanding-first, mathematics-second point of view.

This can leave the user with a so-what feeling about Bayesian inference. After some recent success of Bayesian methods in machine-learning competitions, I decided to investigate the subject again. Announcing SparkR: R on Spark. Join us at the Spark Summit to learn more about SparkR. 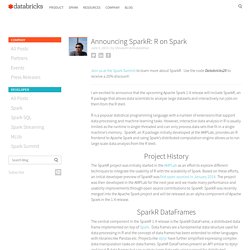 Use the code Databricks20 to receive a 20% discount! I am excited to announce that the upcoming Apache Spark 1.4 release will include SparkR, an R package that allows data scientists to analyze large datasets and interactively run jobs on them from the R shell. R is a popular statistical programming language with a number of extensions that support data processing and machine learning tasks. However, interactive data analysis in R is usually limited as the runtime is single-threaded and can only process data sets that fit in a single machine’s memory. SparkR, an R package initially developed at the AMPLab, provides an R frontend to Apache Spark and using Spark’s distributed computation engine allows us to run large scale data analysis from the R shell.

Project History The SparkR project was initially started in the AMPLab as an effort to explore different techniques to integrate the usability of R with the scalability of Spark. Microsoft Project Oxford Home. Using Latent Dirichlet Allocation to Categorize My Twitter Feed. Over the past 3 years, I have tweeted about 4100 times, mostly URLS, and mostly about machine learning, statistics, big data, etc. 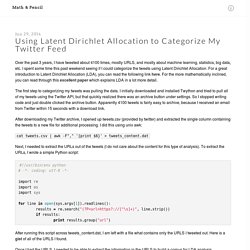 I spent some time this past weekend seeing if I could categorize the tweets using Latent Dirichlet Allocation. For a great introduction to Latent Dirichlet Allocation (LDA), you can read the following link here. For the more mathematically inclined, you can read through this excellent paper which explains LDA in a lot more detail. The first step to categorizing my tweets was pulling the data. I initially downloaded and installed Twython and tried to pull all of my tweets using the Twitter API, but that quickly realized there was an archive button under settings. After downloading my Twitter archive, I opened up tweets.csv (provided by twitter) and extracted the single column containing the tweets to a new file for additional processing. Latent Semantic Analysis (LSA) Tutorial. Latent Semantic Analysis (LSA), also known as Latent Semantic Indexing (LSI) literally means analyzing documents to find the underlying meaning or concepts of those documents. 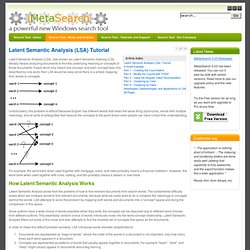 If each word only meant one concept, and each concept was only described by one word, then LSA would be easy since there is a simple mapping from words to concepts. Unfortunately, this problem is difficult because English has different words that mean the same thing (synonyms), words with multiple meanings, and all sorts of ambiguities that obscure the concepts to the point where even people can have a hard time understanding. For example, the word bank when used together with mortgage, loans, and rates probably means a financial institution. On Building a Data Science Curriculum. DataWeek: Intro to Data Science and Machine Learning. Welcome · Advanced R. Gregory Piatetsky sur Twitter : "Computing platforms for #Analytics, #DataMining, #DataScience: most work on PC-sized data. Computing Platforms for Analytics, Data Mining, Data Science. 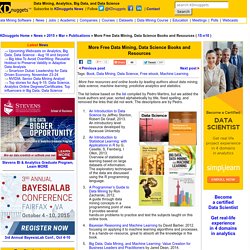 The list below based on the list compiled by Pedro Martins, but we added the book authors and year, sorted alphabetically by title, fixed spelling, and removed the links that did not work. The descriptions are by Pedro. An Introduction to Data Science by Jeffrey Stanton, Robert De Graaf, 2013.An introductory level resource developed by Syracuse UniversityAn Introduction to Statistical Learning: with Applications in R by G. Spatial Statistics Society. Kirk Borne sur Twitter : "Deep Learning experiments with @h2oai package: #abdsc #DataScience #MachineLearning #Rstats. Experiments of Deep Learning with {h2o} package on R. 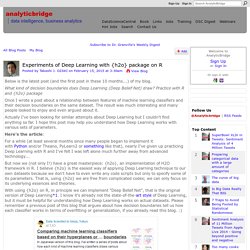 What kind of decision boundaries does Deep Learning (Deep Belief Net) draw? Practice with R and {h2o} package Once I wrote a post about a relationship between features of machine learning classifiers and their decision boundaries on the same dataset. The result was much interesting and many people looked to enjoy and even argued about it. Actually I've been looking for similar attempts about Deep Learning but I couldn't find anything so far. 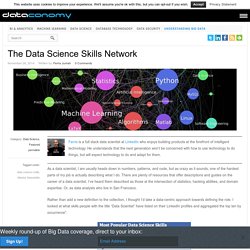 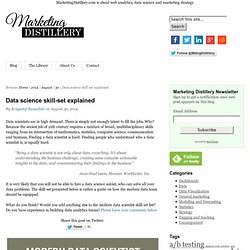 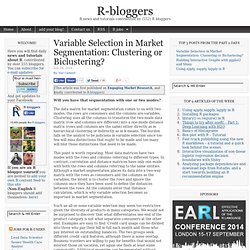 The data matrix for market segmentation comes to us with two modes, the rows are consumers and the columns are variables. Clustering uses all the columns to transform the two-mode data matrix (row and columns are different) into a one-mode distance matrix (rows and columns are the same) either directly as in hierarchical clustering or indirectly as in k-means. The burden falls on the analyst to be judicious in variable selection since too few will miss distinctions that ought to be made and too many will blur those distinctions that need to be made. This point is worth repeating. Most data matrices have two modes with the rows and columns referring to different types.

Such an all-or-none variable selection may seem too restrictive given the diversity of products in many categories. Biclustering offers a two-mode alternative that allows different clusters to be defined by different variables. Revisiting K-means as Matrix Factorization. Rapidly search all R programming language documentation. Machine Learning is too easy. Machine Learning is too easy One of the remarkable things about machine learning is how diverse it is. The viewpoints of Bayesian learning, reinforcement learning, graphical models, supervised learning, unsupervised learning, genetic programming, etc… share little enough overlap that many people can and do make their careers within one without touching, or even necessarily understanding the others.

There are two fundamental reasons why this is possible. For many problems, many approaches work in the sense that they do something useful. This is true empirically, where for many problems we can observe that many different approaches yield better performance than any constant predictor. The implications of this observation agrees with inspection of the field. Particular problems are often “solved” by the first technique applied to them. SAS-versus-R-35222.S. Big Data and Statisticians, Revisited (Video) Big Data and Statisticians, Revisited (Video) Data Science, Big Data and Statistics – can we all live together? From Chalmers Internal on Vimeo. Terry Speed on how (and a bit on why) statisticians have been left out of the big data movement. Best slide comes at 34:20 and I wish Speed have talked more about how his “personal statistical paradigm” contrasts with the ideology of big data. “This is the Golden Age of statistics–but not necessarily for statisticians”–Gerry Hahn “Those who ignore statistics are condemned to re-invent it”–Brad Efron.

Abxda : Reading... #DataScience #akka ... Brief introduction to Scala and Breeze for statistical computing. Introduction In the previous post I outlined why I think Scala is a good language for statistical computing and data science. In this post I want to give a quick taste of Scala and the Breeze numerical library to whet the appetite of the uninitiated. This post certainly won’t provide enough material to get started using Scala in anger – but I’ll try and provide a few pointers along the way. It also won’t be very interesting to anyone who knows Scala – I’m not introducing any of the very cool Scala stuff here – I think that some of the most powerful and interesting Scala language features can be a bit frightening for new users. To reproduce the examples, you need to install Scala and Breeze.

Scalable System Design. We Recommend These Resources Building scalable system is becoming a hotter and hotter topic. Mainly because more and more people are using computer these days, both the transaction volume and their performance expectation has grown tremendously. This one covers general considerations. I have another blogs with more specific coverage on DB scalability as well as Web site scalability. How MySpace Tested Their Live Site with 1 Million Concurrent Users. PayPal Big Data and MySQL Cluster.

Untangle the Integration Knot: Getting Started with HADOOP - Single Server, Multiple Node Simulation. Running Hadoop on Windows « Hayes Davis. What is Hadoop? Hadoop is a an open source Apache project written in Java and designed to provide users with two things: a distributed file system (HDFS) and a method for distributed computation. It’s based on Google’s published Google File System and MapReduce concept which discuss how to build a framework capable of executing intensive computations across tons of computers. Something that might, you know, be helpful in building a giant search index. Algorithms - Apache Mahout.