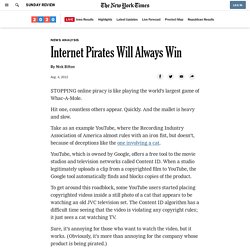 Hit one, countless others appear. Quickly. And the mallet is heavy and slow. Fight Internet Piracy. Internet Piracy: The Effects of Streaming Services and the Digital Marketplace – Columbia Science and Technology Law Review. The Psychology of Online Comments. Several weeks ago, on September 24th, Popular Science announced that it would banish comments from its Web site. 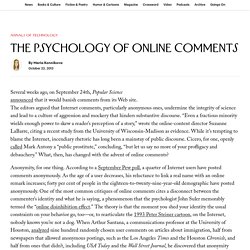 The editors argued that Internet comments, particularly anonymous ones, undermine the integrity of science and lead to a culture of aggression and mockery that hinders substantive discourse. “Even a fractious minority wields enough power to skew a reader’s perception of a story,” wrote the online-content director Suzanne LaBarre, citing a recent study from the University of Wisconsin-Madison as evidence.

While it’s tempting to blame the Internet, incendiary rhetoric has long been a mainstay of public discourse. Cicero, for one, openly called Mark Antony a “public prostitute,” concluding, “but let us say no more of your profligacy and debauchery.” What, then, has changed with the advent of online comments? Anonymity, for one thing. Maria Konnikova is the author of the New York Times best-seller “Mastermind: How to Think Like Sherlock Holmes.” 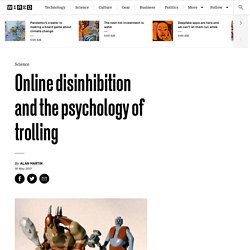 Funerals, even for divisive figures tend to go by with solemn respect. Compare this with a recent example of online trolling at its most extreme: In 2011, a Reading man was jailed for raiding the Facebook tribute pages of a 14 year old girl who had committed suicide, filling it with crass jokes and insults. He had never met the girl in question. That's an extreme example, but it's a phenomenon almost as old as the internet itself: trolling. Common wisdom dictates that people are more aggressive, rude and forthright online because they're anonymous and can act as unpleasantly as they like without immediate consequence. Psychologist John Suller wrote a paper on this in 2004, entitled "The Online Disinhibition Effect", where he explored six factors that could combine to change people's behaviour online. The 'Fair Use' Rule: When Use of Copyrighted Material Is Acceptable.

In some situations, you may use another person or entity's copyrighted work without asking permission. Copyright law bestows certain exclusive rights on creators. For example, under 17 U.S. Code § 106, copyright holders have the exclusive right to reproduce their work, create derivative works, and perform the work publicly. But these exclusive rights are not absolute.

The doctrine of fair use creates important exceptions. Measuring Fair Use: The Four Factors - Copyright Overview by Rich Stim. Unfortunately, the only way to get a definitive answer on whether a particular use is a fair use is to have it resolved in federal court. Judges use four factors to resolve fair use disputes, as discussed in detail below. It’s important to understand that these factors are only guidelines that courts are free to adapt to particular situations on a case‑by‑case basis. In other words, a judge has a great deal of freedom when making a fair use determination, so the outcome in any given case can be hard to predict. The four factors judges consider are: the purpose and character of your usethe nature of the copyrighted workthe amount and substantiality of the portion taken, andthe effect of the use upon the potential market. Ignore Heading – Sub heading content Ignore Heading – Sub table content The Transformative Factor: The Purpose and Character of Your Use In a 1994 case, the Supreme Court emphasized this first factor as being an important indicator of fair use.

Ignore Heading – Content. How to manage your online reputation for free. Just a few years ago, much of what we did was soon forgotten. 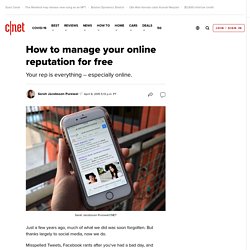 But thanks largely to social media, now we do. Misspelled Tweets, Facebook rants after you've had a bad day, and unflattering photos posted by your friends have made it difficult to manage your online reputation, especially when it's archived for posterity. And it's not just about keeping a lid on the past or your online mistakes -- it's also about making yourself look confident, capable, and Internet-savvy. What Is Cyberbullying. El ciberacoso es el acoso que tiene lugar en dispositivos digitales, como teléfonos celulares, computadoras y tabletas. 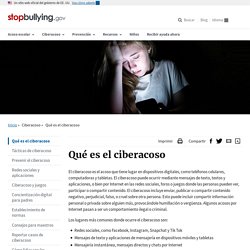 WHAT IS PLAGIARISM AND HOW TO AVOID IT - Plagiarism - Otis College LibGuides at Otis College of Art and Design. What is a paraphrase? 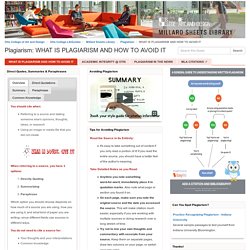 "A paraphrase is a detailed restatement in your own words of a written or sometimes spoken source material. Apart from the changes in organization, wording, and sentence structure, the paraphrase should be nearly identical in meaning to the original passage. It should also be near the same length as the original passage and present the details of the original. " Paraphrasing is "your own rendition of essential information and ideas expressed by someone else, presented in a new form. " Use it: "When the wording is less important than the meaning of the source" If a summary would not provide enough specific details.