Three-Dollar Router Rebooter Has One Job. Sometimes connectivity problems go away by power cycling a router. 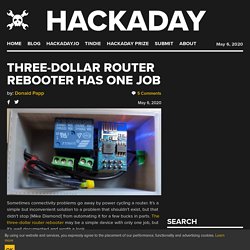 It’s a simple but inconvenient solution to a problem that shouldn’t exist, but that didn’t stop [Mike Diamond] from automating it for a few bucks in parts. The three-dollar router rebooter may be a simple device with only one job, but it’s well documented and worth a look. The device is an ESP8266 board configured to try to reach Google periodically via the local wireless network. If Google cannot be reached, the board assumes a reboot is needed and disconnects the 12 V power supply from the router by using a relay. Then, after a delay, power is re-connected and all of one’s problems are over until the next time it happens. While the code for making this happen may sound trivial, [Mike] nevertheless delves into documenting it.

ESP32-CAM Take Photo and Display in Web Server. Learn how to build a web server with the ESP32-CAM board that allows you to send a command to take a photo and visualize the latest captured photo in your browser saved in SPIFFS. 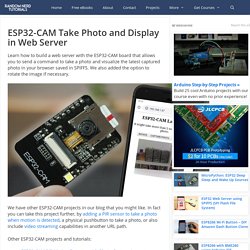 We also added the option to rotate the image if necessary. We have other ESP32-CAM projects in our blog that you might like. In fact you can take this project further, by adding a PIR sensor to take a photo when motion is detected, a physical pushbutton to take a photo, or also include video streaming capabilities in another URL path. Other ESP32-CAM projects and tutorials: Watch the Video Demonstration Watch the following video demonstration to see what you’re going to build throughout this tutorial. Parts Required To follow this project, you need the following parts: You can use the preceding links or go directly to MakerAdvisor.com/tools to find all the parts for your projects at the best price! Project Overview The following image shows the web server we’ll build in this tutorial. Installing the ESP32 add-on setup()

- Hack your life: Gmail to SMS: Go mobile your way. Email services and independent email notification services often provide SMS notifications for your emails, but there are none that I found working for Pakistan. 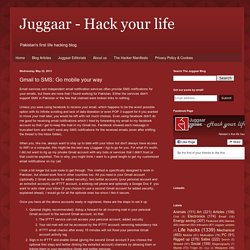 Either the services didn't support SMS in Pakistan or the few that claimed were broken links to nothing. Unless you were using facebook to receive your email, which happens to be the worst possible option with its infinite scrolling and lack of data liberation or even POP 3 support for if you wanted to move your mail later, you would be left with not much choices. Even using facebook didn't do me good for receiving email notifications which I tried by forwarding my email to my facebook account so that I get to keep the mail in my Gmail too. Facebook showed each message in truncated form and didn't send any SMS notifications for the received emails (even after shifting the thread to the inbox folder). Send SMS with Arduino UNO and SIM900D using AT Commands - The Engineering Projects. Hello friends, today’s post as the name suggests is about how to send SMS with Arduino UNO and SIM900D using AT Commands. 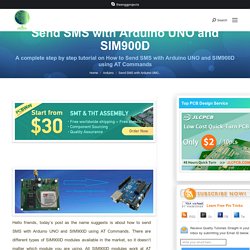 There are different types of SIM900D modules available in the market, so it doesn’t matter which module you are using. All SIM900D modules work at AT commands basically so today I am going to show you how to send an sms via AT commands without using any arduino library. You should first read the AT commands manual which will give you an idea about AT commands. AT commands are special sets of commands which are used for communicating with SIM900 module. Using these AT commands we let our GSM work for us. You must also check GSM Library for Proteus, using this library you can easily simulate your GSM module in Proteus ISIS. Components Used I have shared the list of components used in this project. Connect Arduino UNO with SIM900D First of all, connect Arduino UNO with SIM900D module, which isn’t much difficult. Author: Syed Zain Nasir.

Lizard43/CH340G: Some Arduino clones use a CH340G USB chip and you'll need to install a driver. ESP32 MQTT Publish Subscribe with Arduino IDE. This project shows how to use MQTT communication protocol with the ESP32 to publish messages and subscribe to topics. As an example, we’ll publish BME280 sensor readings to the Node-RED Dashboard, and control an ESP32 output. The ESP32 we’ll be programmed using Arduino IDE. Project Overview In this example, there’s a Node-RED application that controls ESP32 outputs and receives sensor readings from the ESP32 using MQTT communication protocol. The Node-RED application is running on a Raspberry Pi. We’ll use the Mosquitto broker installed on the same Raspberry Pi. The following figure shows an overview of what we’re going to do in this tutorial.

The Node-RED application publishes messages (“on” or “off“) in the topic esp32/output. Note: there’s also a similar tutorial on how to use the ESP8266 and Node-RED with MQTT. Prerequisites.