Cultural appropriation: Sometimes it's so blatant it smacks us in the face, other times it can be a total minefield. Let’s get this out of the way: I am a straight, white, middle-aged man, so what follows you may take with a pinch of salt or disregard completely. 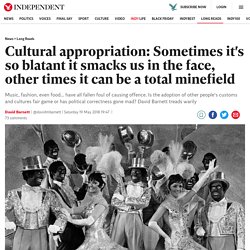 But we’re going to talk, you and I, about the thorny issue of cultural appropriation. It was only a year ago that Oxford Dictionaries put the phrase into their official lexicons, with the definition, “the unacknowledged or inappropriate adoption of the customs, practices, ideas, etc. of one people or society by members of another and typically more dominant people or society.” Definition of Cultural Appropriation. CFDA PVH Dagoba ID Briefing. 5 ways the fashion industry is more diverse than ever. As Fashion Month draws to a close, the industry becomes more introspective. 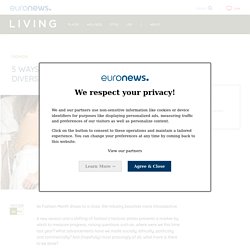 How Millennials on the Throne of Social Media Impact Your Brand's Growth. Between the years 2003 and 2006, social networking sites like Facebook, LinkedIn, and Twitter were just taking their first steps on the internet. 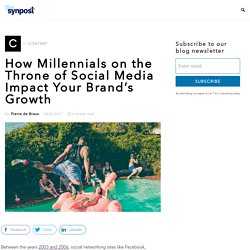 During this time, the oldest millennials weren’t even in their 30s yet. The millennials were the first generation to grow up experiencing the internet as part of their daily lives. As social media sites began to rise into fame, millennials made up the vast majority of users growing up with them—a fact that is especially true for Facebook, which started out being only available to Harvard’s millennial students in 2004.

While we assume that everyone from baby boomers to Gen Z-ers uses social media, we tend to forget that millennials should take priority when it comes to creating our social media strategy. If we were to consider social media as a kingdom, millennials are sitting on the throne. An American woman wearing a Chinese dress is not cultural appropriation. When is a dress just a dress? 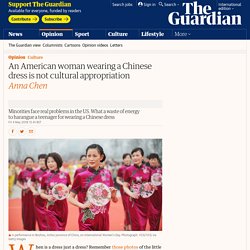 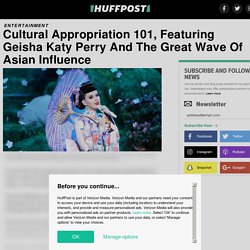 Verizon Media and our partners need your consent to access your device and use your data (including location) to understand your interests, and provide and measure personalised ads. Verizon Media will also provide you with personalised ads on partner products. Fashion Has a Big Problem With Cultural Appropriation, but Not Yet a Solution. When James O. 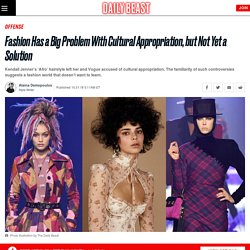 Young published his book Cultural Appropriation in the Arts in 2008, he believed it was too late. The philosopher and professor spent the 1990s and early 2000s studying how artists and musicians took influence from minority cultures in their work. 文化挪用在时尚界为何常常引发争议？_模特. Cultural Appropriation: Is TikTok Normalizing the Harmful Practice? What do you think about cultural appropriation, and what is the reason behind it? Cultural Appropriation in Fashion Industry - 劭任 - Medium. Taking inspirations from other cultures has been a prevailing trend in fashion industry for a long time. 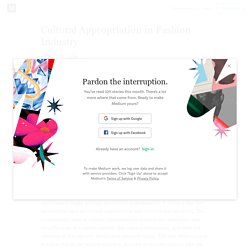 Some cultural elements could often be found on the runway as re-interpretation of the designer’s understanding towards a certain culture. In 2002, the models wore the Geisha-inspired makeup and Chinese tribal costumes designed by John Galliano on the Christian Dior spring 2003 Haute Couture collection runway. Also, in 2015 Met Gala, Sarah Jessica Parker wore a flame-shape headwear created by Philip Treacy to fit in the dress code “China: Through the Looking Glass.”

According to most of the comments left below the video of Christian Dior spring 2003 Haute Couture fashion show on YouTube ( it’s widely believed that this practice of using images from other cultures is the demonstration of transcultural creativity, an intercultural communication, even an appreciation of culture diversity.

How Cries Of Cultural Appropriation Are Stifling Creativity In Fashion. Culture, Not a Costume: What Appropriation Looks Like in the Fashion Industry — OUTSIDER. There’s more to it – from bindis, to the 'watered down Chinese-kimino' (which has been purposely worded wrong to bring a sense of the uncomfortable), to even the most sacred of Native headdresses; it becomes unsettling and upsetting to see white supremacy fashionably adopt parts of oppressed and minority cultures, while actual individuals of said cultures are demonized. 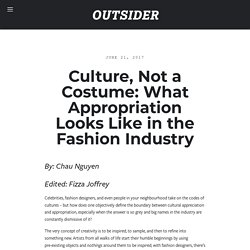 Beyond the industry, the annual holiday of Halloween oxygenates cultural appropriation; Professor Belk (1990) states that 'Halloween is seen as a holiday which focuses on the power of inversion – it's about turning the social norm into something that is not the norm.' How Fashion Meets Culture. But the word ‘fashion’ also means something popular or in style, something ‘of the moment’ – a zeitgeist. 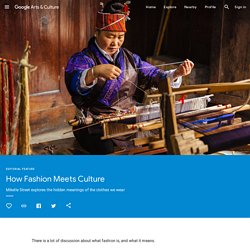 What’s ‘in fashion’ at any one moment speaks to wider trends in society, politics, and the arts. Trend forecasters like WGSN and others look at what’s happening in culture, to whether or not countries are becoming more nationalistic, or fluctuations in the economy, and relate that quite directly to the length of skirt hems and the silhouettes of garments. The clothes we wear represent who we are and, more importantly, who we want to be Fashion speaks for us. How to Avoid Cultural Appropriation & Promote Cultural Awareness Instead. Once upon a time cultural appropriation was something theorised and discussed solely at universities. 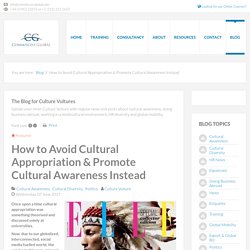 Now, due to our globalized, interconnected, social media fuelled world, the use (or in this case, misuse) of another’s cultural property can turn into big news. When you have the likes of Pharrell Williams being slammed for wearing Native American headwear or Selfridge’s being accused of appropriating black culture, you know that cultural appropriation is no longer something that engages only academics and students.

In fact, the topic of cultural appropriation now touches many areas of our lives from political discourse to marketing to international business to the arts and beyond. Debates rage on the internet over its validity, meaning, applications and implications. Much of the debate and disagreements over cultural appropriation stem from misunderstandings over the real meaning of the term and how it should be applied. Sharing your culture is fine – in fact, it’s extremely positive. 'Racist' D&G ad: Chinese model says campaign almost ruined career. Image copyright Dolce and Gabbana/Instagram The Chinese model featured in a Dolce & Gabbana ad campaign accused of racism has said the controversy almost ruined her career.

Three videos, released in November, showed Zuo Ye struggling to eat Italian food including cannoli and pizza with chopsticks. Widely seen as offensive it led to a severe backlash in China with several retailers pulling the brand's products. Appreciation or appropriation? The cultural trends inﬁltrating the fashion industry. Cultural Appropriation: Meaning, Examples, and Why It is Uncouth. The Thin Line Between Cultural Appropriation And Cultural Appreciation - Society19. It all started with a conversation that I had recently with a classmate. I responded to her Instagram story, which said that she bought “Hawaiian donuts” from a bakery in California. When I saw the post I laughed because I had no idea why they would call them Hawaiian donuts, they were just donuts with a slightly different shape. I jokingly asked her if that’s what they called it on the mainland. How the fashion industry is tuning in to a diverse world.

Social Media Is Making It Easier For White People To Appropriate Culture. The great and maybe scary thing about social media is that social media allows you to share a created image of yourself for anyone to see. Influencers make money off of OOTD pictures while advertising hair pills or appetite lollipops to their millions of followers. As a social media-obsessed society, we know not to trust the perfect Instagram pictures we see on the daily. What is the line between cultural appropriation and appreciation?

From left, Melissa Chan, Josh Kun, Aditi Mayer and Viet Thanh Nguyen, look for the line between cultural appreciation and cultural misappropriation to understand at what point respect for other cultures becomes an exploitation of cultural imagery. Photo by: Michael Baker A panel of experts, including MacArthur Fellows Josh Kun and Viet Thanh Nguyen, explains the history of cultural appropriation and growing awareness in the digital era. Why isn't cultural appropriation viewed as a negative thing in Europe, like it is viewed by the far left in the US? How to Fix Fashion’s Cultural Appropriation Problem. “Good artists borrow, great artists steal.” The question of who actually coined this phrase is up for debate — some argue it might have been T.S.

Eliot, where others name Picasso or author W.H. Davenport Adams. That quandary has also permeated the fashion industry on a multitude of levels — the maxim is finding strong pushback as it applies to fashion brands and designers. Increasingly infiltrated by amateur, consumer watchdogs empowered by social media, fashion companies are operating in a cultural backdrop of watershed movements, necessitating hyper-vigilance to avoid taboo topics and, more importantly, insulting a community.

Quora. What’s up with cultural appropriation on social media? By Maria Fang & Shaun Axani. 外媒解析：究竟什么叫做“文化挪用”与“冒犯” 4081a58b33eafd35836e899b79cf0decff52. Academic Phrasebank – Giving Examples. Writers may give specific examples as evidence to support their general claims or arguments. Examples can also be used to help the reader or listener understand unfamiliar or difficult concepts, and they tend to be easier to remember. For this reason, they are often used in teaching.

Finally, students may be required to give examples in their work to demonstrate that they have understood a complex problem or concept. It is important to note that when statements are supported with examples, the explicit language signalling this may not always be used. For example, the word ‘doctor’ used to mean a ‘learned man’. This is exemplified in the work undertaken by … Another example of what is meant by X is … This distinction is further exemplified in studies using … An example of this is the study carried out by Smith (2004) in which … The effectiveness of the X technique has been exemplified in a report by Smith et al. (2010)

What is cultural appropriation and why do some people see it as such a big problem? Designers like Gucci keep facing accusations of racist designs - Insider. Designers like Gucci and Prada have faced backlash in the past year for culturally insensitive designs.Gucci most recently caused controversy for sending white models down the runway in turbans, and later selling them for close to $800.Gucci, Prada, and Katy Perry's shoe line, Katy Perry Collections, have all faced backlash for designs people have criticized, saying they resemble blackface.Social media has become an important tool for pointing these issues out.There's also a notable lack of diversity in major fashion councils and fashion week shows.Visit INSIDER's homepage for more stories.

Fashion brands like Gucci and Prada have become major fixtures in fashion. In fact, fashion search aggregator Lyst found that Gucci was the most popular brand between October and December 2018. CULTURAL APPROPRIATION IN SOCIAL MEDIA - lilianasuleiman.com. Cultural appropriation: everything is culture and it's all appropriated.