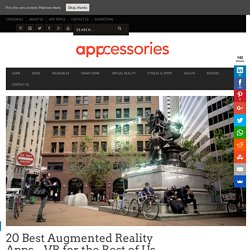 You know: the serious tech heads who don’t think it’s at all strange to sit in a room with a giant set of black goggles over their eyes and interact with people, places, and things that don’t actually exist. For the rest of us, there’s probably a healthy curiosity about VR, but it’s not to the point where we’re willing to spend a few hundred pounds on a serious piece of equipment. Augmented reality, or AR, on the other hand, combines reality (or real reality, since the word “reality” on its own need some qualification here) with virtual reality. HDPlive_v2.0.5(HDP直播)及台灣電視源導入第12頁-Android 軟體下載-Android 遊戲/軟體/繁化/交流-Android 台灣中文網 - 手機版 - Powered by Discuz! 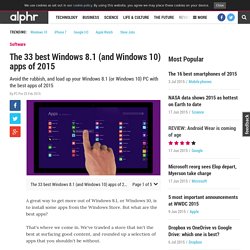 But what are the best apps? That's where we come in. We've trawled a store that isn't the best at surfacing good content, and rounded up a selection of apps that you shouldn't be without. Jump to: Best Windows 8.1 and 10 apps: News and information With no sign of a Sky Sports app on Windows 8 devices, it's up to rival ESPN to bring us our football news and scores, and this quickly improving app does a fantastic job. News Republic. How to run Android apps on any laptop or desktop. Android has a large, vibrant ecosystem of applications. 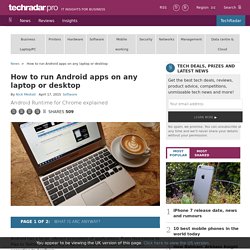 From Heartstone to Plex to Twitter, Google Play is home to over 1.5 million mobile apps, according to AppBrain. Wouldn't it be great to run all these apps on your computer, too? Now you can, thanks to Android Runtime for Chrome. You can now run Android apps on a Mac or PC with Google Chrome. Google’s convergence of Chrome and Android is taking a big step forward this week. 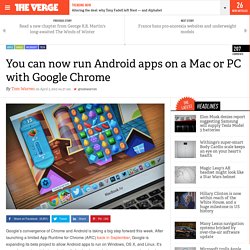 After launching a limited App Runtime for Chrome (ARC) back in September, Google is expanding its beta project to allow Android apps to run on Windows, OS X, and Linux. Featured: Top 10 Android Apps for Learning a Language. It’s now easier than ever to learn a new language, and there are more reasons than ever to do so. 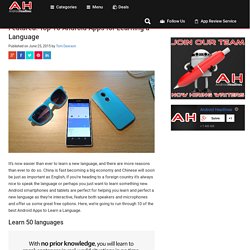 China is fast becoming a big economy and Chinese will soon be just as important as English, if you’re heading to a foreign country it’s always nice to speak the language or perhaps you just want to learn something new. Android smartphones and tablets are perfect for helping you learn and perfect a new language as they’re interactive, feature both speakers and microphones and offer us some great free options. Here, we’re going to run through 10 of the best Android Apps to Learn a Language. Learn 50 languages Kicking things off is 50 Languages, an app that does exactly what it says it does; it offers over 100 free lessons covering 50 different languages. The 50 Essential Android Apps. The Google Play Store has come a long way since its humble beginnings. 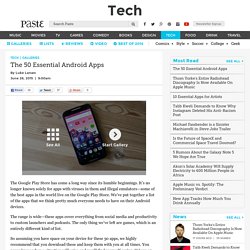 It’s no longer known solely for apps with viruses in them and illegal emulators—some of the best apps in the world live on the Google Play Store. We’ve put together a list of the apps that we think pretty much everyone needs to have on their Android devices. The range is wide—these apps cover everything from social media and productivity to custom launchers and podcasts. The only thing we’ve left are games, which is an entirely different kind of list. The 50 Essential Android Apps. RealPlayer Cloud is now RealTimes! Vote for Best Photo/Image Editing App. Now That Everyone’s Got A Smartphone, We Need Apps That Serve Low-Income Groups. There are one million apps in Apple’s app store. They fulfill all manner of needs, real and imagined. Want to scan a digital copy of your key?

KeyMe has got you. Craving a Korean taco? Seamless is great. Introducing Office Lens Android. Scoop.it Tips. The Grid.

Data journalism tools. PRODUCTIVITY TOOLS. CALENDAR & TODO LIST. How to Enable Floating Windows in Android: 14 Steps. Edit Article Four Parts:Installing the Xposed FrameworkDownloading the XHaloFloatingWindow ModuleEnabling the ModuleConfiguring the Module The floating window feature has been present as an out-of-the-box only in the Samsung Note line of phones. 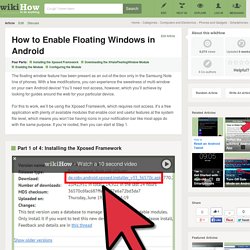 Part 2 of 4: Downloading the XHaloFloatingWindow Module Floating Windows in Android Step 5.360p.mp4- Watch a 10 second video1Go to "Download" in the main app screen of Xposed. Computers. TeamViewer for Remote Control. App Directory: The Best Voice Recording App For Android. Your smartphone can double up as a dictaphone. 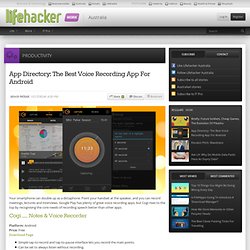 Point your handset at the speaker, and you can record meetings, lectures and interviews. Google Play has plenty of great voice recording apps, but Cogi rises to the top by recognising the core needs of recording speech better than other apps. Cogi — Notes & Voice Recorder Platform: AndroidPrice: FreeDownload Page. 10 Best Alarm Clock App For Android to Replace Your Rooster. No matter how hard you try, you end up being late. 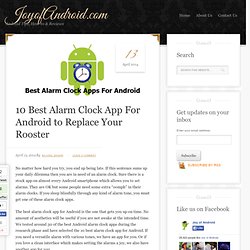 If this sentence sums up your daily dilemma then you are in need of an alarm clock. Sure there is a stock app on almost every Android smartphone which allows you to set alarms. They are OK but some people need some extra “oomph” in their alarm clocks. If you sleep blissfully through any kind of alarm tone, you must get one of these alarm clock apps. Untappd - Discover Beer. PhotoMath reads and solves mathematical problems. Powered by the FacialNetwork.com. Twitter's Periscope is the best livestreaming video app yet. After spending a few days with it, I can say yes, it is. 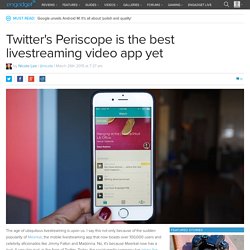 As far as livestreaming apps go, and there aren't very many so far, it's certainly the best I've seen. But hold on a minute, you might say. How To Install Floating windows feature on Any Android Device. Android Developers on Xda forum recently ported Halo and X floating windows Mod for all android devices which was extracted from the famous android rom ‘Paranoid Android ROM’. 很棒的英文演講APP：TED Air - APK分享應用 - 老爹隨筆私塾 - 老爹隨筆. 本帖最後由 danilcat 於 2013-10-10 17:55 編輯 軟體名稱：TED Air 參考連結： 2.3以上版本. Want to build Chrome or Android apps from a Chromebook? Now you can. For the longest time, Google’s app strategy has had a bit of a somewhat strange twist: You couldn’t easily create apps for Chrome or Android without a full computer. That means using a Chromebook to create Chrome apps required an online IDE or other tools for some purposes. Now Google has a Chrome app to essentially create Chrome apps which can be deployed to an Android phone or tablet.

Say hello to the Chrome Dev Editor, notes Google’s François Beaufort. The new Chrome app, formally known as Spartk, is in a developer preview so there’s still work to be done. 【心得】Android 各大 音樂播放器軟體 比較！ @Google Android 綜合討論區 哈啦板. Travel Interpreter: Appstore for Android. Plex: Appstore for Android. Hotel Tonight. Hipmunk is the fastest, easiest way to plan travel. This app will save you time by comparing all the top travel sites so you don’t have to. Plus, save up to 60% off hotels with new Tonight Deals.• "Best apps of 2013" – Google Play• “The new gold standard in flight and hotel apps” – Forbes• “You must try Hipmunk” – Mashable• “A great way to plan travel” – Business InsiderFEATURES:• FAST and EASY flight and hotel booking• Find the LOWEST PRICES on airfare• See flights sorted by “agony” to SAVE TIME by minimizing duration, layovers and price• Unique layout makes it easy to find flights with Wi-Fi• BOOK HOTELS directly on Hipmunk within the app• Need a LAST MINUTE hotel room?

Hipmunk’s goal is to make finding flights and hotels fast and easy. Top 10 New Android Apps of the Week – June 26 2014. Google I/O is in full swing, which is the companies largest developers conference. Tons of news has been breaking and many new apps have been announced. Today, we look at the best new apps of the week, that you might have missed. Google Cardboard - Cardboard puts virtual reality on your smartphone. Try a variety of immersive demos on Android, and get inspired to build your own using the VR Toolkit. Android app ranking and market analysis. Allthecooks Recipes. Allthecooks is an unique cooking community app where people post recipes and pictures. It's your personal recipe composer. After cooking your recipe, other people can post the photo of their own attempt of making the recipe and others can comment.

A lot of recipes also note which other recipe on the site inspired the poster to come up with theirs. This is what makes the site unique - you can follow a complete genealogy of a recipe, and keep on discovering new variations on themes. The recipes themselves don't need to be anything fancy, and that’s another reason why the site is unique. ** We just rebranded the app from Cookpad to Allthecooks ** It's the best place to share and find recipes.

The recipes are synchronized to your watch timeline as soon as you open them. Umano - Audio readout of popular publications. Yahoo Aviate Launcher. Yahoo Aviate for Android. The Best Android Launchers You Can Download Today. We love Android devices as much as the next person, but sometimes the vanilla Android experience leaves us wanting a little more. Thankfully, it’s possible to change the whole look and feel of your Android device with only the minimum of effort – and no need to root. Android launchers, or home screen replacements as they are sometimes known, aren’t anything particularly new but in recent months the idea of completely changing how your phone looks has broken outside of Android geekery and into the mainstream, so we thought it high-time we found out which are the best. Snapseed (for Android 4.0 upward only) A year after being designated the iPad App of the year by Apple in 2011, Nik Software's impressive tablet photo editor comes to Android.