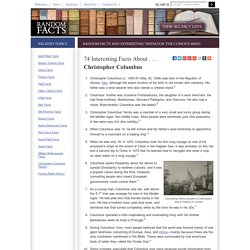 His father was a wool weaver who also owned a cheese stand.b Columbus’ mother was Susanna Fontanarossa, the daughter of a wool merchant. He had three brothers: Bartolomeo, Giovanni Pellegrino, and Giacomo. He also had a sister, Bianchinetta. Columbus was the eldest.b Christopher Columbus’ family was a member of a very small and lucky group during the Middle Ages: the middle class.

Most people were extremely poor (the peasants). Converting native peoples to Catholicism was a method of control Columbus spoke frequently about his desire to spread Christianity to heathen cultures, and it was a popular cause during the time. Columbus believed that he had reached the Indies When Columbus landed in the New World, he believed that he had reached the Indies; thus, he thought, the people he met were Indians. -- Posted April 26, 2014. Christopher Columbus. Christopher Columbus Traveling to India around the southern tip of Africa was dangerous and difficult. An Italian sailor by the name of Christopher Columbus proposed finding a new route by sailing west. Columbus thought that if they sailed west, they would eventually circle the globe and arrive in eastern Asia. For seven years Christopher Columbus traveled around Europe looking for someone who would finance his journey. The monarchs of Europe made fun of him, saying that it was too risky and dangerous to attempt such a voyage around the globe.

Finally, Columbus arrived in Spain. In August of 1492, they granted Christopher Columbus the supplies, men and ships that he needed to carry out his expedition. Columbus’ men were terrified that they would be lost at sea and that they would suffer starvation. On the night of the second day, just before he would have had to turn around, land was sighted. Columbus did not realize that he had arrived in a new part of the world. Explorers for Kids: Christopher Columbus. Biography >> Explorers for Kids Columbus arriving in the Americas by Dioscoro Puebla Occupation: Explorer Born: 1451 in Genoa, Italy Died: May 20, 1506 Best known for: Discovering AmericaBiography: Christopher Columbus is the explorer who is credited for discovering America. 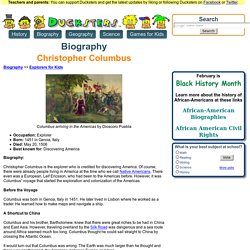 Of course, there were already people living in America at the time who we call Native Americans. There even was a European, Leif Ericsson, who had been to the Americas before. Before the Voyage Columbus was born in Genoa, Italy in 1451. A Shortcut to China Columbus and his brother, Bartholomew, knew that there were great riches to be had in China and East Asia. It would turn out that Columbus was wrong. Three Ships and a Long Voyage Columbus spent years trying to convince someone to pay for his voyage.

He set sail on August 3, 1492 with three ships named the Nina, the Pinta, and the Santa Maria. Finding Land On October 12, 1492 land was spotted. Returning Home Upon returning home, Columbus was treated like a hero. Primary History - Famous People - Christopher Columbus.