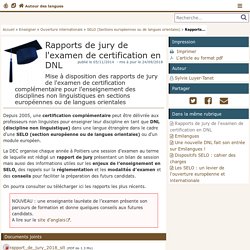 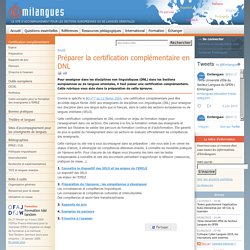 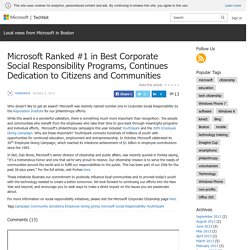 Microsoft was recently named number one in Corporate Social Responsibility by the Reputation Institute for our philanthropy efforts. While this award is a wonderful validation, there is something much more important than recognition: the people and communities who benefit from the employees who take their time to give back through meaningful programs and individual efforts. Microsoft’s philanthropy campaigns this year included YouthSpark and the 30th Employee Giving Campaign. Microsoft plans a 75 percent reduction in carbon emissions by 2030.

People with Autism Are Filling a Void in the Workplace - Autism Parenting Magazine. The future job market is looking bright for many people with autism spectrum disorder (ASD). 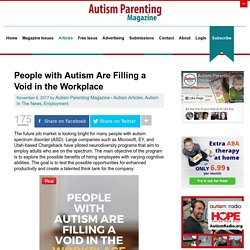 Large companies such as Microsoft, EY, and Utah-based Chargeback have piloted neurodiversity programs that aim to employ adults who are on the spectrum. The main objective of the program is to explore the possible benefits of hiring employees with varying cognitive abilities. The goal is to test the possible opportunities for enhanced productivity and create a talented think tank for the company. Technology is beginning to transform Indian agri, education, health. Farmers in Devanakonda mandal in Kurnool district of Andhra Pradesh are dependent on the rains. 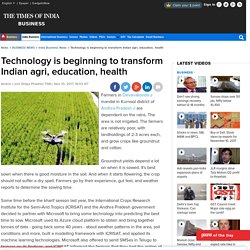 The area is not irrigated. The farmers are relatively poor, with landholdings of 2-3 acres each, and grow crops like groundnut and cotton. Groundnut yields depend a lot on when it is sowed. It's best sown when there is good moisture in the soil. And when it starts flowering, the crop should not suffer a dry spell. Some time before the kharif season last year, the International Crops Research Institute for the Semi-Arid Tropics (ICRISAT) and the Andhra Pradesh government decided to partner with Microsoft to bring some technology into predicting the best time to sow. Towards the end of May, the area received good rains, and some farmers decided to sow. Management euro. Primark success proves cheap and cheerful can still conquer high street. Tesco founder Jack Cohen famously said the secret of success was “pile ‘em high and sell ‘em cheap”. 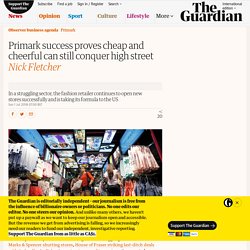 And despite many retailers on the high street struggling to make ends meet – Marks & Spencer shutting stores, House of Fraser striking last-ditch deals with its landlords, Debenhams issuing a profit warning – it seems to be a formula that still works even in a tough environment. The proof is there at Primark, which has taken Cohen’s philosophy to heart, and has attracted consumers into its stores with its cut-price fashion and makeup.

The latest bargain spotted by aficionados is a £2 lipstick that bears comparison with a rival product costing £17.50. As other retailers mothball sites, Primark continues to successfully open new outlets: last month, there were reportedly 100 people queuing outside its Westfield store in west London on its first day well before the doors opened. Not for Primark, anyway. Primark – what’s the secret to its success? Whether you pronounce it Preemark, Primark or Primarni, there is no doubt that you’ll have come across Primark – the value fashion and homewares retailer that has become a staple of British high streets and shopping centres. 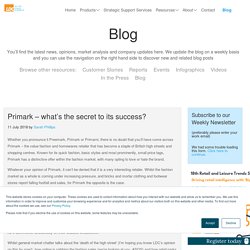 Known for its quick fashion, basic styles and most prominently, small price tags, Primark has a distinctive offer within the fashion market, with many opting to love or hate the brand. Whatever your opinion of Primark, it can’t be denied that it is a very interesting retailer. Whilst the fashion market as a whole is coming under increasing pressure, and bricks and mortar clothing and footwear stores report falling footfall and sales, for Primark the opposite is the case. Primark has 'perfected art of mixing low prices with high fashion' Concerns that Primark's cheap prices could be compromising its ethics - The heavily criticised chain stands by its practices - Cornwall Live.

Primark's Truro store had been open barely a week and was already a hit with shoppers. 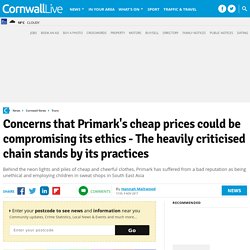 The big name retailer chose Cornwall's capital city to open its first and flagship store bringing the number of stores in the UK to 174 and 321 worldwide. Concerns that Primark's cheap prices could be compromising its ethics - The heavily criticised chain stands by its practices - Cornwall Live. The hidden face of Primark fashion. ASOS has seen a huge rise in this trend and it could be thanks to Meghan Markle. ASOS creates sanitary pads for women in Kenya using spare fabric. The new ASOS Made In Kenya collection is providing women in the Kasigua region of the country who are in need with reusable sanitary pads made from leftover fabric from clothes in the range. 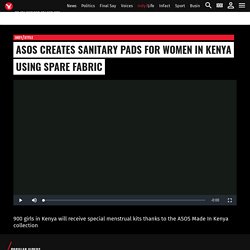 Earlier this year, the fashion retailer announced that it would be making stronger efforts to become a more sustainable brand by developing a new training programme for designers in partnership with London College of Fashion’s Centre for Sustainable Fashion. Following on from that, the ASOS Foundation has collaborated with the SOKO Community Trust in Kenya to launch The Kujuwa Initiative, created with the sole purpose of supporting young women in the Kasigua region of Kenya.

Netflix is raising its subscription prices. All three of the company's plans will increase in price by $1-$2. 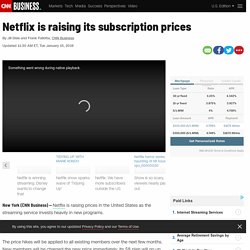 The standard $11 plan, for example, will increase to $13 per month. The price hikes will be applied to all existing members over the next few months. New members will be charged the new price immediately. Amazon reportedly developing subscription video game streaming service. Amazon is planning to use its massive cloud computing service to jump into the streaming market for video game play, according to a new report from the Information. The service, which could potentially bring top-notch titles to virtually anyone with a smartphone or streaming device, could make Amazon a major competitor in the space already in play by Microsoft and Google. While most big-budget video games require users to own a gaming console or a computer to run, Amazon’s reported streaming service would live on the tech giant’s cloud network, freeing customers to play elaborate, robust games even on their mobile devices, the report said.

The service is slated to launch next year, the report said. The development of a Web-based gaming hub would mark a significant foray for Amazon. Other big tech companies are advancing their own efforts to claim territory in the new game streaming market, including Microsoft and Google. Amazon did not immediately respond to a request for comment.

Corporate Social Responsibility Can Actually Be a Competitive Advantage, So Where's Your CSR Program? Here are six companies leading the way in CSR not just because it's trendy but because it's the right thing to do. Apple’s so-called 'Netflix killer' has failed to live up to its name. Tesco Forms Purchasing Alliance With Carrefour to Cut Costs. Tesco Plc is forming a purchasing alliance with French retailer Carrefour SA to increase its leverage with suppliers in a consolidating and price-squeezed supermarket business. The alliance between two of Europe’s largest retailers, with combined annual sales of about $171 billion, aims to enhance the companies’ clout in buying branded goods and private-label items as competition from discounters like Aldi and Lidl ramps up.

The planned partnership is the latest cross-Channel cooperation between U.K. and French companies even amid the looming uncertainties of Brexit, following a deal last year between Casino Guichard-Perrachon SA and grocery e-commerce technology provider Ocado Group Plc. Tesco and Carrefour spend roughly $105 billion a year on products they sell to customers, Jefferies analysts led by James Grzinic said in a note. That suggests that even small improvements could quickly lead to total savings of more than $500 million, they said.