Vijay Kumar: Robots that fly ... and cooperate. Moore's law. Moore's law is the observation that, over the history of computing hardware, the number of transistors on integrated circuits doubles approximately every two years. 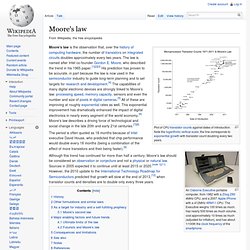 The law is named after Intel co-founder Gordon E. Moore, who described the trend in his 1965 paper.[1][2][3] His prediction has proven to be accurate, in part because the law is now used in the semiconductor industry to guide long-term planning and to set targets for research and development.[4] The capabilities of many digital electronic devices are strongly linked to Moore's law: processing speed, memory capacity, sensors and even the number and size of pixels in digital cameras.[5] All of these are improving at roughly exponential rates as well. This exponential improvement has dramatically enhanced the impact of digital electronics in nearly every segment of the world economy.[6] Moore's law describes a driving force of technological and social change in the late 20th and early 21st centuries.[7][8] History[edit] Predictions made by Ray Kurzweil. American author, inventor and futurist Raymond Kurzweil has become well known for predicting the future of artificial intelligence and the human race. 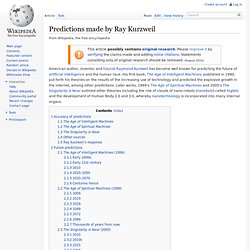 His first book, The Age of Intelligent Machines, published in 1990, put forth his theories on the results of the increasing use of technology and predicted the explosive growth in the internet, among other predictions. Later works, 1999's The Age of Spiritual Machines and 2005's The Singularity is Near outlined other theories including the rise of clouds of nano-robots (nanobots) called foglets and the development of Human Body 2.0 and 3.0, whereby nanotechnology is incorporated into many internal organs. Accuracy of predictions[edit] The Age of Intelligent Machines[edit] Perhaps most significantly, Kurzweil foresaw the explosive growth in worldwide Internet use that began in the 1990s. Siri Creator Working On Sci-Fi Interface That Predicts Your Thoughts. When Siri was first released, it was received with a bit of skepticism. 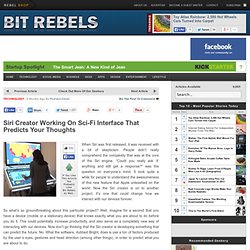 People didn’t really comprehend the complexity that was at the core of the Siri engine. “Could you really ask ‘it’ anything and still get a response?” Was the question on everyone’s mind. Top 10 New Future Jobs. Ray Kurzweil, Featured Speaker. Technological singularity.

Proponents of the singularity typically postulate an "intelligence explosion",[5][6] where superintelligences design successive generations of increasingly powerful minds, that might occur very quickly and might not stop until the agent's cognitive abilities greatly surpass that of any human. Basic concepts. SUPER PODERES / El perfeccionamiento humano / Documental. Geneticists Discover a Way to Extend Lifespans to 800 Years. How Will Humans Respond to Immortality? Thanks for the responses! 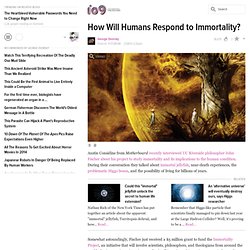 What really drives resource consumption instead is rising standards of living. But rising everyone standards of living is good because it is very strongly correlated with increases in women's social, economic and political rights, improvements in people's eductation, a vast reduction in infant mortality and huge reduction in birth rates. The Age of Spiritual Machines. The Age of Spiritual Machines is a non-fiction book by inventor and futurist Ray Kurzweil about artificial intelligence and the future course of humanity. 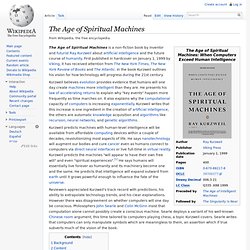 First published in hardcover on January 1, 1999 by Viking, it has received attention from The New York Times, The New York Review of Books and The Atlantic. In the book Kurzweil outlines his vision for how technology will progress during the 21st century. Kurzweil predicts machines with human-level intelligence will be available from affordable computing devices within a couple of decades, revolutionizing most aspects of life. He says nanotechnology will augment our bodies and cure cancer even as humans connect to computers via direct neural interfaces or live full-time in virtual reality. 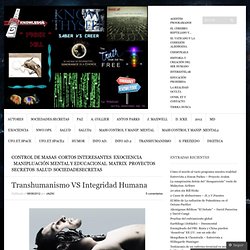 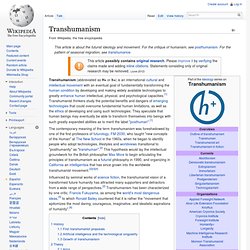 They speculate that human beings may eventually be able to transform themselves into beings with such greatly expanded abilities as to merit the label "posthuman".[1] History[edit] A Transhumanism of Ethics. Posted: Wed, January 02, 2013 | By: Special Guest by Enrique Lescure While still a pretty unknown tendency in Sweden and the other Scandinavian countries (where atheist humanism just recently has started to troll the consensus culture), transhumanism is a growing current in the Anglo-Saxon world. 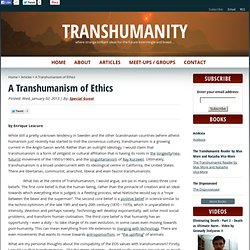 Rather than an outright ideology, I would claim that transhumanism is a form of zeitgeist or cultural affiliation that is having its roots in the longevity/neo-futurist movement of the 1950′s/1960′s, and the singulitarianism of Ray Kurzweil. Ultimately, transhumanism is a broad undercurrent with its ideological centre in California, the United States. There are libertarian, communist, anarchist, liberal and even fascist transhumanists. Hibridar humanos y robots provocará una nueva brecha en la Humanidad. 2045: Man becomes machine. IBM Is Bringing Its Mega-Intelligence Watson to Your Smartphone. Siri is helpful when you want to schedule a reminder or look at the forecast, but wouldn't it be better to have a bona fide Jeopardy! 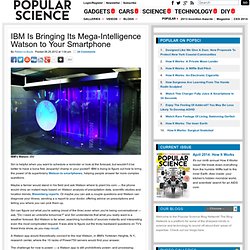 Champ in your pocket? IBM is trying to figure out how to bring the power of its superbrainy Watson to smartphones, helping people answer far more complex questions. Maybe a farmer would stand in his field and ask Watson where to plant his corn — the phone would chirp an instant reply based on Watson analysis of precipitation data, scientific studies and location trends, Bloomberg reports. Or maybe you can ask a couple questions and Watson can diagnose your illness, sending a a report to your doctor, offering advice on prescriptions and telling you where you can pick them up. John Hagel: Rethinking Race Against the Machines. Andrew McAfee: Race Against the Machine. Andrew McAfee: Are droids taking our jobs? Andrew McAfee: What will future jobs look like? The New Industrial Revolution - The Chronicle Review. By Jeffrey R. Young Chicago Illustration by Coneyl Fay, Science Source Baxter is a new type of worker, who is having no trouble getting a job these days, even in a tight economy.

IMPACT: Recession, tech kill middle-class jobs. NEW YORK (AP) — Five years after the start of the Great Recession, the toll is terrifyingly clear: Millions of middle-class jobs have been lost in developed countries the world over. And the situation is even worse than it appears. Most of the jobs will never return, and millions more are likely to vanish as well, say experts who study the labor market. What's more, these jobs aren't just being lost to China and other developing countries, and they aren't just factory work. The Robot Will See You Now - Jonathan Cohn. IBM's Watson—the same machine that beat Ken Jennings at Jeopardy—is now churning through case histories at Memorial Sloan-Kettering, learning to make diagnoses and treatment recommendations.

This is one in a series of developments suggesting that technology may be about to disrupt health care in the same way it has disrupted so many other industries. Are doctors necessary? Imagining a future when machines have all the jobs. WASHINGTON (AP) — Martin Ford saw it everywhere, even in his own business. Smarter machines and better software were helping companies do more work with fewer people. His Silicon Valley software firm used to put its programs on disks and ship them to customers. The disks were made, packaged and delivered by human beings.

Now Ford's customers can just download the software to their computers — no disks, no packaging, no delivery workers. "It is getting easier and easier to avoid hiring people by taking advantage of technology," Ford says. Technological Unemployment. Automation will soon touch every job on the planet: prediction. First, the bad news: employment levels are lower than they were a decade ago, and those jobs aren't coming back.

Shyam Sankar: The rise of human-computer cooperation. How Technology Is Destroying Jobs. Andrew McAfee: The Machines are Coming. Reworking the World of Work. Technology will replace 80% of what doctors do. By Vinod Khosla. Peter Diamandis - The best way to predict the future. Peter Diamandis: Abundance is our future. How to survive the future ? Drogas psicodélicas para prepararte para la singularidad tecnológica. On the exponential curve: inside Singularity University. David Rowan Editor of Wired magazine This article was taken from the May 2013 issue of Wired magazine.

Quantum computing. Silicon electronics are a staple of the computing industry, but researchers are now exploring other techniques to deliver powerful computers. A quantum computer is a theoretical device that would make use of the properties of quantum mechanics, the realm of physics that deals with energy and matter at atomic scales. Google teams up with NASA on quantum computing lab. Quantum-computing. Quantum Machine Learning Singularity from Google, Kurzweil and Dwave ? NASA and Google Team Up with Speedy D-Wave Quantum Computer : Tech. Google Buys a Quantum Computer. Google and NASA Launch Quantum Computing AI Lab. How Technology Is Destroying Jobs. Organizing the World's Scientific Knowledge to make it Universally Accessible and Powerful: Científicos logran implantar la primera memoria artificial en un cerebro vivo. To the space station and beyond with Linux. Ve la luz un nuevo catalizador de hidrógeno que se alimenta solo con energía solar.