20 Things Successful People 'Refuse' to Do  This post originally appeared on BrandMentalist.com 1. 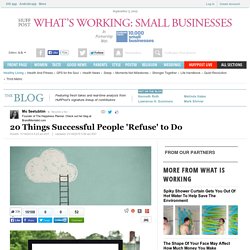 They don't define success in a monetary term. Most successful people define success as happiness, having a peace of mind, or helping others. They see money as something that brings them comfort and opens doors of opportunities. They realize that money can't buy them happiness. Meet The Man Who Solved The Mysterious Cicada 3301 Puzzle. Two years ago, a cryptic message started appearing on message boards across the Internet. 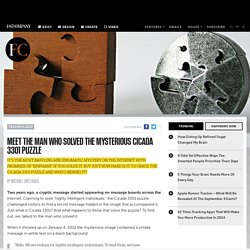 Claiming to seek "highly intelligent individuals," the Cicada 3301 puzzle challenged visitors to find a secret message hidden in the image that accompanied it. Uk.businessinsider. 10 Behaviors You Never See in Successful People. When you spend decades working with executives and business leaders, you really can’t help but observe what works and doesn’t work over the long haul. 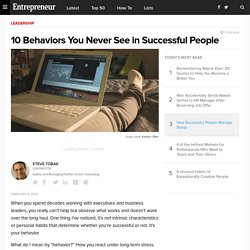 One thing I’ve noticed, it’s not intrinsic characteristics or personal habits that determine whether you’re successful or not. It’s your behavior. What do I mean by “behavior?” How you react under long-term stress. Whether you meet your commitments or not. Now, I admit to having known some pretty dysfunctional founders and CEOs who did well for themselves for a time. Related: Want to Be Successful? The Reality of Quantum Weirdness. Photo IN Akira Kurosawa’s film “Rashomon,” a samurai has been murdered, but it’s not clear why or by whom. 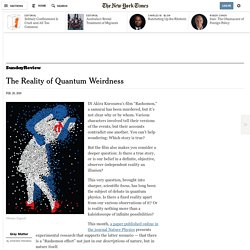 Various characters involved tell their versions of the events, but their accounts contradict one another. You can’t help wondering: Which story is true? But the film also makes you consider a deeper question: Is there a true story, or is our belief in a definite, objective, observer-independent reality an illusion? This very question, brought into sharper, scientific focus, has long been the subject of debate in quantum physics. This month, a paper published online in the journal Nature Physics presents experimental research that supports the latter scenario — that there is a “Rashomon effect” not just in our descriptions of nature, but in nature itself.

Over the past hundred years, numerous experiments on elementary particles have upended the classical paradigm of a causal, deterministic universe. So an electron is a wave, not a particle? 7 Things You Must Know to Be a Free-Thinker. Gilbert Ross, InspireAmaze, Guest We all have a certain degree of admiration for those forward-thinkers who were ahead of their time or for those free-spirited individuals who had the courage, the will and the foresight to speak out their minds despite risking being labelled as non-conformists and cast to the outer fringes of society. 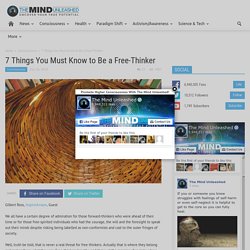 Well, truth be told, that is never a real threat for free thinkers. Actually that is where they belong and makes them what they are. 7 Absolute Best Tools To Protect Yourself From Negative Energies & Entities. By Amateo Ra| Whether you fully believe in it or not, all humans can be subjected and influenced by negative energy. 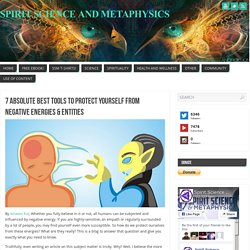 If you are highly-sensitive, an empath or regularly surrounded by a lot of people, you may find yourself even more susceptible. So how do we protect ourselves from these energies? What are they really? This is a blog to answer that question and give you exactly what you need to know. Truthfully, even writing an article on this subject matter is tricky. Instead, I invite an alternative. When it comes to the energetic World, I believe that Light attracts Light, and that we do have to understand negativity, work with it consciously and give it just enough attention as to be aware of it but not let it rule our lives.

I believe all truly negative energies, entities or spirits operate in one primary function. Therefore the more worry, expressed fear, resistance or panic you have towards negative energy, the more it has the ability to steal your vital life force. Share and Enjoy. Five Lifesaving Signals Your Body Is Sending You: Learn How To Recognize Them! Our body, both on the outside and on the inside, is an incredible machine maintained by a number of factors such as our daily diet, daily routine and lifestyle. 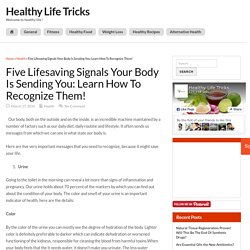 Teaching Children How to Think Instead of What to Think. Right now our education system is doing more to indoctrinate our children than to educate them. 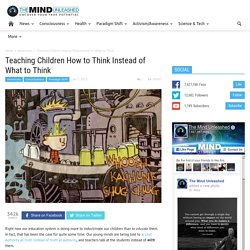 In fact, that has been the case for quite some time. Our young minds are being told to accept authority as truth instead of truth as authority, and teachers talk at the students instead of with them. Teachers have become repeaters of information. They are merely regurgitating everything they once learned from their own teachers, and perpetuating the recycling of information; information that has managed to evade scrutiny for generations. Children are no longer the masters of their own learning, and instead, their minds are being treated as storage containers. The factory model of education, with its focus on academic and economic elitism, is churning out obedient workers for the system, encouraged to conform every step of the way. There are those who say that critical thinking skills cannot be taught in schools.

The importance of teaching philosophy in schools cannot be underestimated.