Are you fact-checking the résumé of your new hire? You should. The following excerpt from The HR Manager's Guide to Background Checks and Pre-Employment Testing, by Adrian Miedema and Christina Hall, is reprinted by permission of the publisher, Carswell. © 2012. 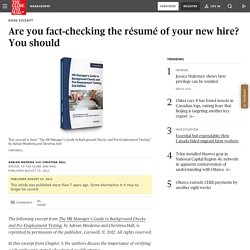 All rights reserved. In this excerpt from Chapter 3, the authors discuss the importance of verifying a job applicant's stated educational qualifications: Chapter 3: Education and professional or trade certification checks Story continues below advertisement 3.1 Executive summary1. 2. 3. 4. 3.2 IntroductionMost employers require an applicant for employment to specify his or her level of education or professional qualification. 3.3 Education fraud on résumésSurveys suggest that a surprisingly high percentage of job applicants lie on their résumé.

While most cases of résumé fraud go unpublicized, on occasion, the media reports on high-profile cases. Too often, however, an employer simply relies on the applicant's own representations about his or her educational qualifications. . (1. . ) (2. . ) (3.) Are you fact-checking the résumé of your new hire? You should. Types of Workplace Discrimination. What is workplace discrimination, and what constitutes discrimination against employees or job applicants? 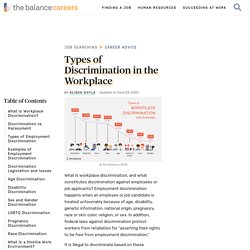 Employment discrimination happens when an employee or job candidate is treated unfavorably because of age, disability, genetic information, national origin, pregnancy, race or skin color, religion, or sex.1 In addition, federal laws against discrimination protect workers from retaliation for “asserting their rights to be free from employment discrimination.” 2 It is illegal to discriminate based on these protected characteristics when hiring or in the workplace.3 Because it is illegal to discriminate in any facet of employment, workplace discrimination extends beyond hiring and firing to discrimination that can happen to someone who is currently employed. What Is Workplace Discrimination? The ABC's of the Canadians with Disabilities Act (CDA) In October of 2015, the newly minted Canadian government announced its commitment to the creation of federal legislation that guarantees the rights of people with disability across the country. 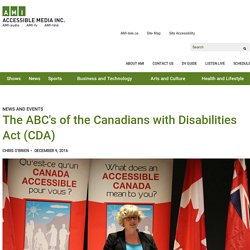 This legislation, currently referred to as the Canadians with Disabilities Act, is an attempt to establish a cohesive federal framework that ensures that the rights of people with disabilities are not infringed upon. Carla Qualtrough, a former human rights lawyer and Paralympian, was appointed as the Minister of Sport and Persons with Disabilities to spearhead this initiative which began with extensive public consultations. Public participation during the consultation phase is essential for shaping the government's approach to this legislation. It's equally important for the public to understand what goes into the establishment of effective legislation which meets the needs of an entire population. Harassment in Canadian workplaces. Lori Dupont Obituary - Windsor, ON. DUPONT, Lori Arline 36 years, was tragically taken from us on Saturday November 12, 2005. 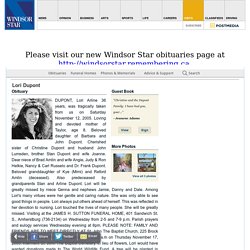 Rumors about the working conditions at Amazon warehouses and on the delivery routes have circulated for years. 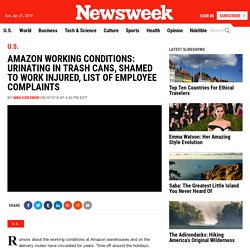 Time off around the holidays, adequate breaks on shift and appropriate wages are all reportedly missing from the lives of some Amazon employees. Some workers for the company are allegedly on food stamps and receive other federal assistance, but Amazon, like other large companies, doesn’t cover the cost of that assistance, and Senator Bernie Sanders wants that to change. Sanders introduced a bill on September 5 that would tax employers, like Amazon, when their employees need federal benefits, like Medicaid and food stamps, to help cover the cost of those services.

The bill is called the “Stop Bad Employers by Zeroing Out Subsidies Act” or the “Stop BEZOS Act,” just like the Amazon CEO’s last name. Workers at Whole Foods, which was recently acquired by Amazon, are moving to unionize in the face of the acquisition due to Amazon’s reputation. Holidays.