I am a student of history at Clayton State University. This account will be mainly about my digital history experiments and experiences, though others may come to pass.

Story of the House. For a short visual historic background – watch this presentation on Time.com. 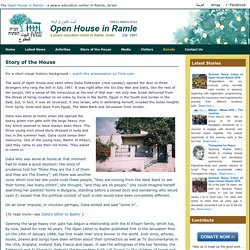 The seed of Open House was sawn when Dalia Eshkenazi {now Landau} opened the door to three strangers who rang the bell in July 1967. It was right after the Six Day War and Dalia, like the rest of her people, felt a sense of the miraculous at the end of that war: not only was Israel delivered from the threat of being invaded on all sides by Syria in the North, Egypt in the South and Jordan in the East, but, in fact, it was all reversed; it was Israel, who in defending herself, invaded the Golan Heights from Syria, Sinai and Gaza from Egypt, The West Bank and Jerusalem from Jordan. Dalia was alone at home when she opened the heavy green iron gate with the large heavy iron key which seemed to have always been there. The three young men stood shyly dressed in suits and ties in the summer heat. Dalia could sense their insecurity. On an inner impulse, or intuition perhaps, Dalia smiled and said “come in”.. 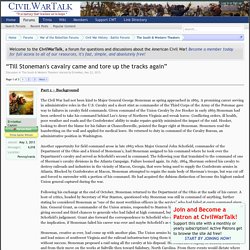 The fact that it was winter was not going to stop Grant from continuing to push the Confederacy toward extinction. While the Armies of the Potomac and the James facing Robert E. Lee’s Army of Northern Virginia remained relatively quiet, there was action on other fronts. The prime mover was Sherman who had reached Savannah at Christmas and was planning to move north into the Carolinas. Grant approved Sherman’s plans by the middle of January and he would begin his Carolina Campaign at the end of the month. National Register nomination process in Georgia. ContactLynn Speno, National Register & Survey Specialist lynn.speno@dnr.ga.gov or 770-389-7842 We have updated our photography requirements for HPIFs and HDIFs - please see section 5B for details! 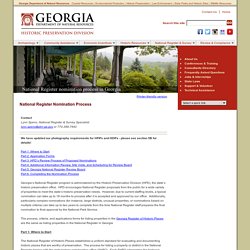 Part 1: Where to StartPart 2: Application FormsPart 3: HPD’s Review Process of Proposed NominationsPart 4: Additional Information Review, Site Visits, and Scheduling for Review BoardPart 5: Georgia National Register Review Board Part 6: Completing the Nomination Process Georgia’s National Register program is administered by the Historic Preservation Division (HPD), the state’s historic preservation office. HPD encourages National Register proposals from the public for a wide variety of properties to meet the state’s historic preservation needs. However, due to current staffing levels, a typical nomination can take up to 18 months to process after it is accepted and approved by our office. The first step is to determine what historic property you want to nominate. 1. 2. 3. Hans Rosling's 200 Countries, 200 Years, 4 Minutes - The Joy of Stats - BBC Four. Fusion Tables. 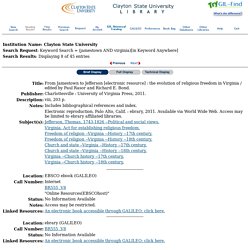 Did Jamestown’s Settlers Drink Themselves to Death? - History in the Headlines. In the fall of 1609, several hundred European settlers were struggling to survive on swampy Jamestown Island, riding out a brutal drought and hoping for boatloads of supplies. 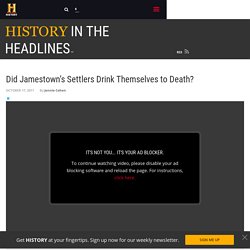 By the following spring, after a horrific winter that became known as the “starving time,” all but 60 had perished. Four hundred years later, historians can only speculate about the causes of this massive population collapse, which nearly snuffed out the first permanent English settlement in North America. But a team of geologists at the College of William & Mary may be closing in on a suspect: drinking water fouled by salt, arsenic, human waste or a medley of these contaminants. Life was no picnic for the Jamestown colony’s earliest founders, but at least they had enough to eat. But in the fall of 1609, shortly after the arrival of new ships packed with more mouths to feed, a disastrous sequence of events plunged Jamestown into famine, said Whittenburg.