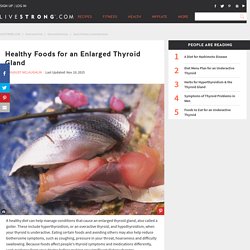 These include hyperthyroidism, or an overactive thyroid, and hypothyroidism, when your thyroid is underactive. Eating certain foods and avoiding others may also help reduce bothersome symptoms, such as coughing, pressure in your throat, hoarseness and difficulty swallowing. Because foods affect people's thyroid symptoms and medications differently, seek guidance from your doctor before making any significant dietary changes. Vegetables contribute rich amounts of antioxidants that lower inflammation and help your body resist and heal from infections and disease.

While eating anti-inflammatory foods when you have a goiter is important, certain vegetables may exacerbate your condition. The minerals iodine and zinc play an important role in thyroid function. Unlike refined grains, whole grains aren't stripped of valuable nutrient content during processing. Lose Weight. My Thyroid Symptoms Vanished With Diet, Vitamins & Minerals. 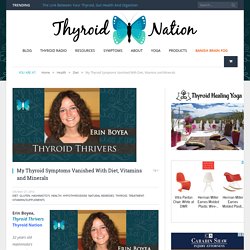 My doctor made it sound so simple, “Take this pill. Your thyroid needs it. You’ll feel better.” My Story: A Brief Summary. How to Heal Your Thyroid By Healing Your Liver. This is Part 2 of a 3-part series on overcoming hypothyroidism: This is the difference. 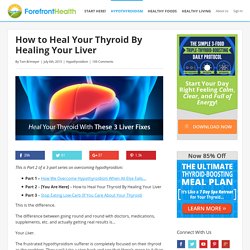 The difference between going round and round with doctors, medications, supplements, etc. and actually getting real results is… Your Liver. The frustrated hypothyroidism sufferer is completely focused on their thyroid as the problem.

Is Fibromyalgia Undiagnosed Hashimoto's? - Hashimotos Healing. Hashimoto’s is the most common cause of hypothyroidism in the United States. 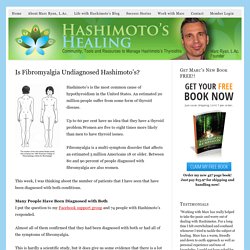 An estimated 20 million people suffer from some form of thyroid disease. Up to 60 per cent have no idea that they have a thyroid problem.Women are five to eight times more likely than men to have thyroid issues. Fibromyalgia is a multi-symptom disorder that affects an estimated 5 million Americans 18 or older. Between 80 and 90 percent of people diagnosed with fibromyalgia are also women.

Levothyroxine. Autoimmune Patients, Are You Th1 or Th2 Dominant? I remember the day I was reading the book Why Do I Still Have Thyroid Symptoms? 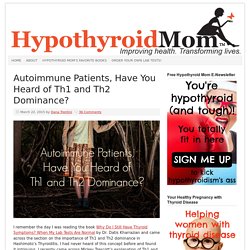 Written by Mickey Trescott, Autoimmune Paleo Those that suffer from autoimmune disease commonly experience symptoms that stem from imbalances within the functioning of their immune system. In this article I hope to give readers a basic explanation of how the T-helper cells work within the immune system, as well as what factors can cause them to be more or less in balance. Basics of Immune Balancing for Hashimoto's. Epstein-Barr Virus and Hashimoto’s. When I was taking my pharmacy licensing exam after graduation, I remember thinking that I could never possibly know more than I did at that time, but I have learned so much more since then- learning is one of my biggest passions- and I've found that the more I learn, the more I want to learn. 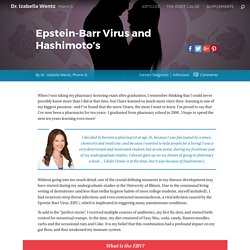 I'm proud to say that I've now been a pharmacist for ten years- I graduated from pharmacy school in 2006. I hope to spend the next ten years learning even more! I decided to become a pharmacist at age 16, because I was fascinated by science, chemistry and medicine, and because I wanted to help people for a living! I was a very determined and motivated student, but at one point, during my freshman year of my undergraduate studies, I almost gave up on my dream of going to pharmacy school ... I didn't know it at the time, but it was because of Hashimoto's. To add to the “perfect storm”, I received multiple courses of antibiotics, my first flu shot, and started birth control for menstrual cramps. Hashimoto's Disease: The Infection Connection. Have you been tested for common infections associated with Hashimoto’s disease? 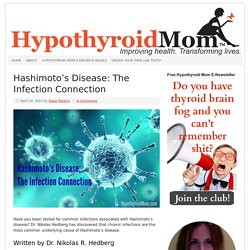 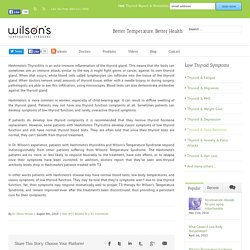 This means that the body can sometimes aim an immune attack, similar to the way it might fight germs or cancer, against its own thyroid gland. When that occurs, white blood cells called lymphocytes can infiltrate into the tissue of the thyroid gland. When doctors remove small amounts of thyroid tissue, either with a needle biopsy or during surgery, pathologists are able to see this infiltration, using microscopes. Blood tests can also demonstrate antibodies against the thyroid gland.

Hashimoto’s is more common in women, especially of child-bearing age. If patients do develop low thyroid complaints it is recommended that they receive thyroid hormone replacement. In Dr. In other words patients with Hashimoto’s disease may have normal blood tests, low body temperatures, and classic symptoms of low thyroid function.

Hypersomnia and Hashimoto’s. I often receive messages from clients, readers and other health care professionals about people who are doing everything, but still struggling with their health. 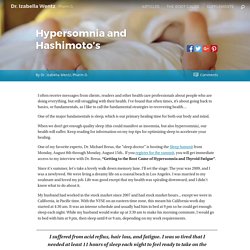 I’ve found that often times, it’s about going back to basics, or fundamentals, as I like to call the fundamental strategies to recovering health… One of the major fundamentals is sleep, which is our primary healing time for both our body and mind. When we don’t get enough quality sleep (this could manifest as insomnia, but also hypersomnia), our health will suffer. Keep reading for information on my top tips for optimizing sleep to accelerate your healing.

One of my favorite experts, Dr. How does the outside temperature affect Hashimoto's disease? - Thyroid Disorders. You should insist on FT3 and FT4 EVERY time you have labs. 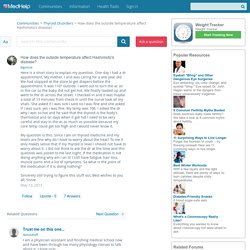 TSH is simply not sufficient to base meds decisions on. Year old FT3 and FT4 are virtually ancient history once you're on thyroid meds, but yours of a year ago are both low, indicating an increase in meds was in order. Infections As Hidden Triggers For Hashimoto’s Lyme and Hashimoto’s. I love getting messages from with your success stories! As I opened up my inbox this morning, I just received a message from a lovely woman who said that she "HAD" Hashimoto's and that she was able to get it into remission though changing her diet! After going gluten and dairy free, she is no longer testing positive for thyroid antibodies, feeling amazing and tapering off her thyroid mediations!!

I've written in great detail about food, and how eating a nutrient dense diet, free of gluten and dairy, can get Hashimoto's into remission. Candida and Hashimoto’s Connection. If I could put all of the triggers of Hashimoto’s into 6 different buckets, I would categorize Hashimoto’s as a combination of food sensitivities, nutrient depletions, intestinal permeability, an impaired ability to handle stress, and impaired ability to handle toxins, and in some cases, chronic (often hidden) infections. Many times, it’s these underlying triggers that keep us from feeling well, despite taking thyroid medications. One potential trigger for Hashimoto’s via the intestinal permeability mechanism is the opportunistic yeast Candida albicans.

Candida is a fungus that is treated with anti-infective protocols, but is not necessarily an infection. This is because Candida is a form of yeast that is naturally found in a person’s mouth, intestines, and for women, in the vaginal tract. It’s True: You Can Prevent Hashimoto’s. Those who do not spend time thinking about their health in their youth, spend a lot more time thinking about their health in later life.

~Proverb Most of my articles to date have focused on reversing Hashimoto’s, but as they say, an ounce of prevention is worth a pound of cure. I often get questions from readers about whether it’s possible to prevent Hashimoto’s. We know that autoimmune disease tends to run in families, and people commonly assume that genes are to blame. This is only partially true - genes are not our destiny! Is Hashimoto's Hypothyroidism Genetic? And What To Do About Genes. Many people have asked me if Hashimoto’s is genetic, and if so, is there anything we can do about our genes?

We know that there is a genetic component to developing Hashimoto’s and the condition tends to run in families. an organ wasting form (atrophic) associated with HLA-DR3 gene inheritance enlarged thyroid (goiterous form) through HLA-DR5 inheritance These genes are common in the Caucasian population. Reversing Autoimmunity? And The Perfect Storm Three factors that need to be present for autoimmunity to develop. There is not just one event that causes autoimmunity, but instead, a series of events has to line up just right to create the perfect storm, or perfect circumstances, for developing autoimmunity.

Recent advances in autoimmunity have been made by an American researcher Alessio Fasano. Dr. Fasano and his colleagues have suggested that there are three factors that need to be present for autoimmunity to develop: Genetic predisposition Exposure to antigen (trigger) Intestinal permeability The intestinal permeability and triggers cause an immune system imbalance that results in the body no longer recognizing itself from a foreign invader. It was once believed that once the autoimmune process is activated, it becomes independent of continuous exposure to the environmental trigger and becomes self-sustaining and irreversible.

However, examples of autoimmunity have discredited the “irreversible” aspect of this theory. Another aspect we can impact is the intestinal permeability. How To Find Your Path. How to Stop Attacking Yourself: 9 Steps to Heal Autoimmune Disease. INFLAMMATION IS A “HOT” TOPIC IN MEDICINE. It appears connected to almost every known chronic disease — from heart disease to cancer, diabetes to obesity, autism to dementia, and even depression. Other inflammatory diseases such as allergies, asthma, arthritis, and autoimmune disease are increasing at dramatic rates. As physicians we are trained to shut off inflammation with aspirin, anti-inflammatory medication such as Advil or Motrin, steroids, and increasingly more powerful immune suppressing medication with serious side effects. But we are not trained to find and treat the underlying causes of inflammation in chronic disease.

6 Different Hashimoto's Root Causes. Top 9 Things I'd Say To A Friend Newly Diagnosed with Hashimoto’s A Hashimoto's Guide. 10 reasons why Hashimoto's patients don't get better. Top 10 Tips For Overcoming Hashimoto's Fatigue Get Your Energy Back. Infections And Hashimoto's Molecular Mimicry-an autoimmune theory. Molecular mimicry is the theory that bacterial cells or other microbial “triggers” have a similar appearance to the cells that make up parts of our physiology or “self” antigens. When an infection occurs, these infectious cells are recognized as foreign. This is really great for getting rid of the infections, but sometimes the immune system targets proteins in the infectious cells that resemble the proteins in our own cells. This inadvertently causes a cross-reaction with our “self” antigens, i.e., our own cells.

This case of mistaken identity is thought to trigger the start of autoimmunity. Top 10 Takeaways From 2232 People With Hashimoto's. After implementing carefully researched lifestyle changes, I was able to see a tremendous improvement in my health. Infections As Hidden Triggers For Hashimoto’s Lyme and Hashimoto’s. Periodontitis, A Trigger For Hashimoto's? Molecular Mimicry is an Autoimmune Theory. Molecular mimicry is an autoimmune theory that suggest bacterial cells or other microbial “triggers” have a similar appearance to the cells that make up parts of the human body, or “self antigens".

When these bacteria are present, the immune system attacks not only them, but also parts of our body that may have similar appearing proteins. One of the most well-known examples of this theory in action is caused by the bacteria that causes the common throat infection known as “strep throat”. In some cases, especially when the infection is not treated with antibiotics within two to three weeks, the immune system will start launching an attack against the Streptococcus bacteria, unfortunately, these bacteria have components that resemble the human heart valves, and the immune system inadvertently attacks heart valves as well. This reaction is known as rheumatic fever and can be deadly and often necessitates heart valve transplants.

The mechanism is as follows: Where Do I Start With Hashimoto's? What's Really Going On In Hashimoto's? Hashimoto's is more than just hypothyroidism. Julie Beyer, Confident Choices, Interstitial Cystitis Diet. WHERE DO I BEGIN WITH HASHIMOTO'S? - Hashimotos Healing. Thyroid Pharmacist.

Reversing Autoimmunity? And The Perfect Storm Three factors that need to be present for autoimmunity to develop. Medication. READ NOW. The Meridian System: A Map to the Body - Pride Dental.