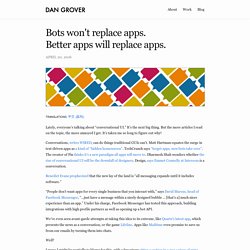 It’s the next big thing. But the more articles I read on the topic, the more annoyed I get. It’s taken me so long to figure out why! Conversations, writes WIRED, can do things traditional GUIs can’t. Matt Hartman equates the surge in text-driven apps as a kind of “hidden homescreen”. Benedict Evans prophecized that the new lay of the land is “all messaging expands until it includes software.” “People don’t want apps for every single business that you interact with,” says David Marcus, head of Facebook Messenger, “…just have a message within a nicely designed bubble … [that’s a] much nicer experience than an app.” We’ve even seen avant-garde attempts at taking this idea to its extreme, like Quartz’s latest app, which presents the news as a conversation, or the game Lifeline. Well! I guess I might be partially to blame for this, with a few pieces citing a section in a 2014 piece of mine that I literally titled “Chats as Universal UI.”

Add voice enabled, conversational interface to anything. How To Build Bots for Messenger - Facebook for Developers. Today, we're launching the Messenger Platform (beta), making it possible for developers to connect with the more than 900 million people around the world who use Messenger every month. 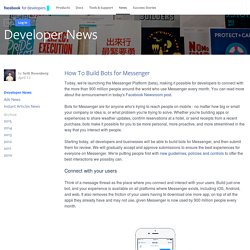 You can read more about the announcement in today's Facebook Newsroom post. Bots for Messenger are for anyone who's trying to reach people on mobile - no matter how big or small your company or idea is, or what problem you're trying to solve. Whether you're building apps or experiences to share weather updates, confirm reservations at a hotel, or send receipts from a recent purchase, bots make it possible for you to be more personal, more proactive, and more streamlined in the way that you interact with people.

Starting today, all developers and businesses will be able to build bots for Messenger, and then submit them for review. We will gradually accept and approve submissions to ensure the best experiences for everyone on Messenger. Connect with your users Three Main Capabilities Within Bots for Messenger. Wikipedia:Creating a bot. Robots or bots are automatic processes that interact with Wikipedia (and other Wikimedia projects) as though they were human editors. 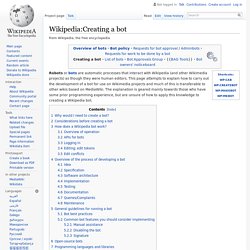 This page attempts to explain how to carry out the development of a bot for use on Wikimedia projects and much of this is transferable to other wikis based on MediaWiki. The explanation is geared mainly towards those who have some prior programming experience, but are unsure of how to apply this knowledge to creating a Wikipedia bot. Why would I need to create a bot? [edit] Bots can automate tasks and perform them much faster than humans. Considerations before creating a bot[edit] It is often far simpler to request a bot job from an existing bot.

Pandorabots. Bots: An introduction for developers. Bots are third-party applications that run inside Telegram. 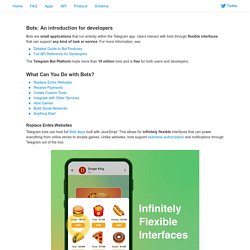 Users can interact with bots by sending them messages, commands and inline requests. You control your bots using HTTPS requests to our bot API. 1. What can I do with bots? To name just a few things, you could use bots to: Get customized notifications and news. 2. At the core, Telegram Bots are special accounts that do not require an additional phone number to set up. Send messages and commands to bots by opening a chat with them or by adding them to groups. Messages, commands and requests sent by users are passed to the software running on your servers. A detailed description of the Bot API is available on this page » 3.

There's a… bot for that. You may also like to check out some code examples here » 4. 5. Telegram bots are unique in many ways — we offer two kinds of keyboards, additional interfaces for default commands and deep linking as well as markdown support and much, much more. Inline mode Read more about the inline mode » 6. Bot Framework.