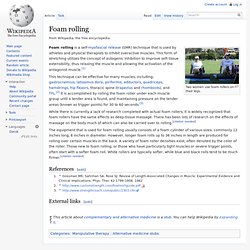 Foam rolling is a self-myofascial release (SMR) technique that is used by athletes and physical therapists to inhibit overactive muscles. This form of stretching utilizes the concept of autogenic inhibition to improve soft tissue extensibility, thus relaxing the muscle and allowing the activation of the antagonist muscle.[1] This technique can be effective for many muscles, including: gastrocnemius, latissimus dorsi, piriformis, adductors, quadriceps, hamstrings, hip flexors, thoracic spine (trapezius and rhomboids), and TFL.[2] It is accomplished by rolling the foam roller under each muscle group until a tender area is found, and maintaining pressure on the tender areas (known as trigger points) for 30 to 60 seconds.[3] While there is currently a lack of research completed with actual foam rollers, it is widely recognized that foam rollers have the same effects as deep-tissue massage.

References[edit] External links[edit] Stretch and Strengthen exercises. IT band Friction Syndrome. The iliotibial (IT) band is a tough group of fibers that run along the outside of the thigh. 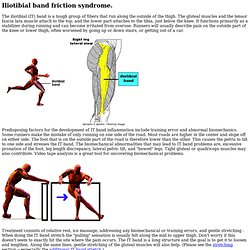 The gluteal muscles and the tensor fascia lata muscle attach to the top, and the lower part attaches to the tibia, just below the knee. It functions primarily as a stabilizer during running and can become irritated from overuse. Runners will usually describe pain on the outside part of the knee or lower thigh, often worsened by going up or down stairs, or getting out of a car. Predisposing factors for the development of IT band inflammation include training error and abnormal biomechanics.

Some runners make the mistake of only running on one side of the road. Treatment consists of relative rest, ice massage, addressing any biomechanical or training errors, and gentle stretching . Prevention of the IT band syndrome is achieved by running on a level surface or alternating directions on the road, a balanced approach to training which allows for rest and recovery, and preventive stretching. Return. Foam rolling. Foam roller reps - JP Fitness Forums. Iliotibial IT Band - Iliotibial IT Band Standing Stretch for Flexibility.

The iliotibial (IT) band is a tough group of fibers that run along the outside of the thigh. 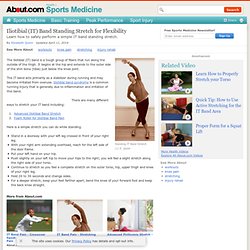 It begins at the hip and extends to the outer side of the shin bone (tibia) just below the knee joint. The IT band acts primarily as a stabilizer during running and may become irritated from overuse. Iliotibial band syndrome is a common running injury that is generally due to inflammation and irritation of this band. There are many different ways to stretch your IT band including: Here is a simple stretch you can do while standing. Stand in a doorway with your left leg crossed in front of your right leg. ITB Rehab Routine – Video Demonstration. The last major injury I had was a severe illiotibial band (IT Band) injury after the New York City Marathon in 2008. 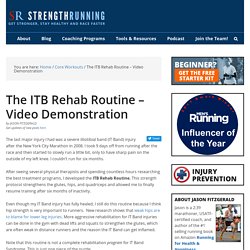 I took 9 days off from running after the race and then started to slowly run a little bit, only to have sharp pain on the outside of my left knee. I couldn’t run for six months. After seeing several physical therapists and spending countless hours researching the best treatment programs, I developed the ITB Rehab Routine. This strength protocol strengthens the glutes, hips, and quadriceps and allowed me to finally resume training after six months of inactivity. Even though my IT Band injury has fully healed, I still do this routine because I think hip strength is very important to runners.

Note that this routine is not a complete rehabilitation program for IT Band Syndrome.