XKeyscore: NSA tool collects 'nearly everything a user does on the internet' 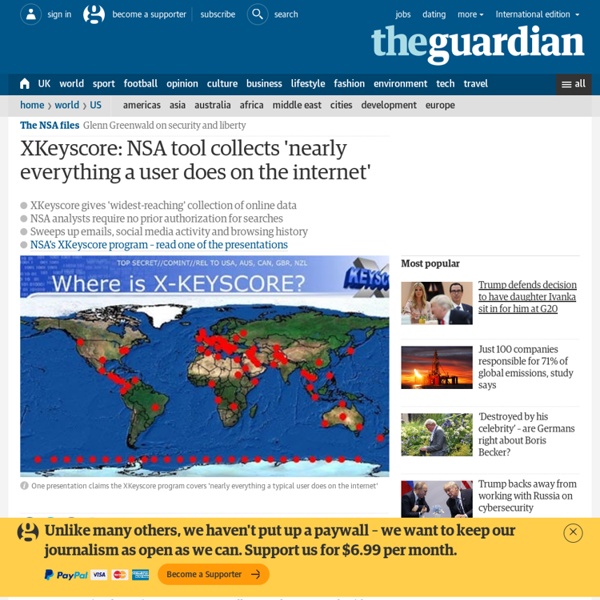 Snowden's Dad SCHOOLS Obama, Pelosi, and Holder in Open Letter Activist Post Re: Civil Disobedience, Edward J. Snowden, and the Constitution Dear Mr. President: You are acutely aware that the history of liberty is a history of civil disobedience to unjust laws or practices. Civil disobedience is not the first, but the last option. Thoreau’s moral philosophy found expression during the Nuremburg trials in which “following orders” was rejected as a defense. A dark chapter in America’s World War II history would not have been written if the then United States Attorney General had resigned rather than participate in racist concentration camps imprisoning 120,000 Japanese American citizens and resident aliens. Civil disobedience to the Fugitive Slave Act and Jim Crow laws provoked the end of slavery and the modern civil rights revolution. We submit that Edward J. The right to be left alone from government snooping–the most cherished right among civilized people—is the cornerstone of liberty. Writing in Brinegar v. On June 27, 2013, Mr. Ms.

Eve players stage giant online space battle 29 July 2013Last updated at 07:05 ET Space battles are a fact of life in Eve Online One of the largest video game space battles ever seen has taken place in the Eve Online game. For five hours on 28 July about 4,000 players took part in the epic battle between two of the game's biggest alliances. The two sides were fighting for control of resources within several of the game's solar systems. Time was slowed down in the virtual universe to help servers cope with the huge numbers of players and ships. The battle pitted spaceships belonging to CFC against those from the Test Alliance in a region of space known as 6VDT. Eve Online is a detailed space simulation that sees players fly spaceships through thousands of virtual star systems, seeking resources they can use to prosper. The resources can be found on planets and in asteroid fields or acquired through piracy or other underhand means. Ships vary in size from small trading vessels to giant capital ships.

Free Computers & Information Technology Magazines Home » Computers & Information Technology Magazines If you’re an IT pro, you know better than anybody how quickly your business environment can change. We have all the FREE trade magazines you need to stay on top of your game. Eweek, CIO Insight, and Baseline Magazine, are but a few of many FREE publications we will make available to you. Free Magazines and Whitepapers SDM Magazine SDM is the security-channel media, providing management and technical professionals ... White Papers - Free Instant Content Connections Between Michael Hastings, Edward Snowden and Barrett Brown—The War With the Security State By Christian Stork on Aug 7, 2013 At the time of his death in a mysterious one-car crash and explosion, journalist Michael Hastings was researching a story that threatened to expose powerful entities and government-connected figures. That story intersected with the work of two controversial government critics—the hacktivist Barrett Brown and the on-the-run surveillance whistleblower Edward Snowden. Any probe into Hastings’s untimely death needs to take into account this complex but essential background. But First, the Raw Facts A little over 12 hours before his car was incinerated on an LA straightaway on June 18, 2013, Hastings sent out a short email headed, “FBI Investigation, re: NSA.” From: Michael Hastings Date: Mon, Jun 17, 2013 at 12:56 PM Subject: FBI Investigation, re: NSA To: [REDACTED] [REDACTED] [REDACTED] Hey [5 REDACTED WORDS] the Feds are interviewing my “close friends and associates.” Also: I’m onto a big story, and need to go off the radat for a bit. Michael Deep Background

JaiRo - Open Source x86 Router Platform by Sabai Technology The problem with the traditional home router is that it just isn't powerful enough. Think of today's routers like cell phones from 10 years ago. They handle one or two core functions well, but don't have the ability or power for increased performance. You couldn't play Words With Friends or get turn by turn directions on those basic cell phones of the past. Sabai Technology's goal is to start the same kind of revolution at the network core that smartphones brought to mobile. First, JaiRo is a platform, not just a hardware unit. Secondly, JaiRo is modular. Finally, JaiRo brings a new level of usability to networking. Visit the JaiRo Demo Site! Kickstarter funds will go toward increasing the speed of development, as well as building and growing the online community for developers. Sabai Technology has developed a reputation for excellence. The VPN Accelerator is Sabai Technology's most successful product launch to date, selling over 200 units in the first two weeks. "It just works!

Web CEO White-Label SEO Platform for Digital Agencies Keyword Tool Pick the most profitable keywords for your site to optimize your pages for and spy on your competition. Rank Checker Tool Monitor website rankings for your targeted keywords on 370+ global and local search engines. SEO Analysis Tool Analyze on-the-page and off-the page SEO factors on your site and fine-tune your landing pages. Deep State on social networking privacy Swedes Create Impossible Material by Mistake By George Dvorsky In yet another example of scientific serendipity, Uppsala University researchers have created an unprecedented material with record-breaking properties. And most remarkable of all, this new material — which was thought impossible to make for over a century — was the result of an accident in the lab. And indeed, the new magnesium carbonate material exhibits some remarkable properties. Adsorption, Not Absorption Called upsalite in honor of the university where it was discovered, the material features a surface area of 800 square meters per gram. This means that it can absorb — or more accurately, adsorb — more water at low relative humidities than the most advanced materials currently in existence. Unlike absorption, where fluids permeate or are dissolved by a liquid or solid, adsorption involves the adhesion of atoms, ions, or molecules from a gas, liquid, or dissolved solid to a surface. a) Scanning electron microscope view of upsalite. 'We started to get excited'

David Miranda, schedule 7 and the danger that all reporters now face | Alan Rusbridger In a private viewing cinema in Soho last week I caught myself letting fly with a four-letter expletive at Bill Keller, the former executive editor of the New York Times. It was a confusing moment. The man who was pretending to be me – thanking Keller for "not giving a shit" – used to be Malcolm Tucker, a foul-mouthed Scottish spin doctor who will soon be a 1,000-year-old time lord. And Keller will correct me, but I don't remember ever swearing at him. I do remember saying something to the effect of "we have the thumb drive, you have the first amendment". The fictional moment occurs at the beginning of the DreamWorks film about WikiLeaks, The Fifth Estate, due for release next month. This real-life exchange with Keller happened just after we took possession of the first tranche of WikiLeaks documents in 2010. In this work he is regularly helped by David Miranda. The man was unmoved. • Alan Rusbridger has replied to several comments in the thread below. Lionel said: You're right.

Steve Wozniak: Microsoft resting on its laurels 26 August 2013Last updated at 04:33 ET Apple "found the formula" to remain innovative despite its size Apple's co-founder Steve Wozniak has said that rival Microsoft has been "resting on" the markets it built up a "long, long time ago". He added that Steve Ballmer's time as the chief executive was not as significant as that of Bill Gates. Mr Wozniak told the BBC that one of the key reasons for the success of Apple was that despite being a big firm, it had remained nimble and innovative. He also gave his backing to Apple's current chief executive Tim Cook. "Steve Jobs had very strong feelings about what makes a company great, what makes products great. He said that those who had been criticising Apple for not coming up with a great new product needed to understand that "great advances for mankind don't happen every year". 'Fight for Apple' Continue reading the main story “Start Quote Samsung had great marketing prowess. End QuoteSteve WozniakCo-founder, Apple