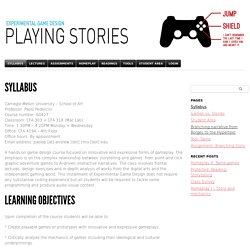 The emphasis is on the complex relationship between storytelling and games: from point-and-click graphic adventure games to AI-driven interactive narratives. The class involves frontal lectures, design exercises and in-depth analysis of works from the digital arts and the independent gaming world. This installment of Experimental Game Design does not require any substantial coding experience but all students will be required to tackle some programming and produce audio visual content. The Amazingly Accurate Futurism of 2001: A Space Odyssey. The Making of Stanley Kubrick’s ‘2001: A Space Odyssey’ documents in nearly scientific detail exactly that: the story of how the iconic science-fiction film came into existence, and how it predicted much of the technology we take for granted today. 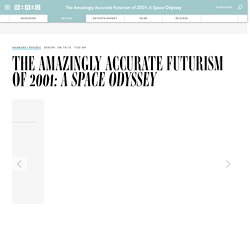 Science writer and space historian Piers Bizony offers an extraordinarily detailed catalog. Lum’s Formula for Futures. [Note: this is a quick and early draft of a longer treatment that will be published later] Theory-Driven Scenario Development A recent client workshop had us engaging a number of in-house researchers on the basics of futures studies and our approaches to developing foresight. 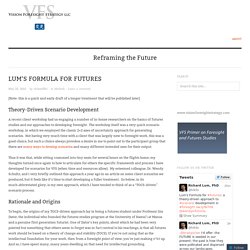 The workshop itself was a very quick scenario workshop, in which we employed the classic 2×2 axes of uncertainty approach for generating scenarios. Not having very much time with a client that was largely new to foresight work, this was a good choice, but such a choice always provokes a desire in me to point out to the participant group that there are many ways to develop scenarios and many different intended uses for their output. Thus it was that, while sitting crammed into tiny seats for several hours on the flights home, my thoughts turned once again to how to articulate for others the specific framework and process I have developed for scenarios for VFS (when time and resources allow).

After a seventh season that jumped forward in time to the year 2017, setting up innumerable jokes about a potential future where Elton John owns Chick-fil-A and the Cubs finally win the World Series, the NBC comedy wrapped up by looking forward as much as it looked back. Since its final season was essentially a story about the future, it is perhaps fitting so much of it revolved around a critique of tech culture, and how the sheer financial weight of companies like Facebook and Google bend the world around them in damaging ways that often contradict the sleek optimism of their products. 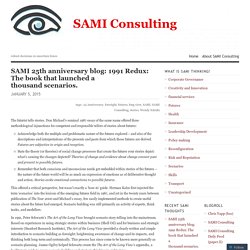 Don Michael’s seminal 1987 essay of the same name offered three methodological injunctions for competent and responsible tellers of stories about futures: Acknowledge both the multiple and problematic nature of the futures explored – and also of the descriptions and interpretations of the presents and pasts from which those futures are derived. Futures are subjective in origin and reception.State the theory (or theories) of social change processes that create the futures your stories depict: what’s causing the changes depicted?

Theories of change and evidence about change connect past and present to possible futures.Remember that both conscious and unconscious needs get embedded within stories of the futures – the nature of the future world will be as much an expression of emotions as of deliberative thought and action. Stories evoke emotional connections to possible futures. Twine, the Video-Game Technology for All - NYTimes.com. Photo Perhaps the most surprising thing about “GamerGate,” the culture war that continues to rage within the world of video games, is the game that touched it off. 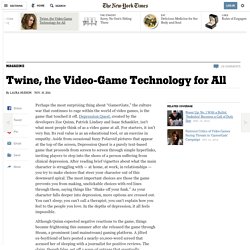 Depression Quest, created by the developers Zoe Quinn, Patrick Lindsey and Isaac Schankler, isn’t what most people think of as a video game at all. For starters, it isn’t very fun. Its real value is as an educational tool, or an exercise in empathy. Aside from occasional fuzzy Polaroid pictures that appear at the top of the screen, Depression Quest is a purely text-based game that proceeds from screen to screen through simple hyperlinks, inviting players to step into the shoes of a person suffering from clinical depression. Continue reading the main story. Just in Time for Election Day, a Post-Apocalyptic Toronto in Pictures. What Would It Take to Turn New York into a Megacity? JWT London's Edible Poster for Mr Kipling Takes the Cake. Following on from the launch of the new Mr Kipling Life is Better with Cake work last week, JWT London has created the world's first poster made entirely out of cake. 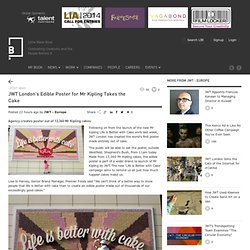 The public will be able to eat the poster, outside Westfield, Shepherd's Bush, from 11am today Made from 13,360 Mr Kipling cakes, the edible poster is part of a wider brand re-launch of Mr Kipling by JWT. The new ‘Life is Better with Cake’ campaign aims to remind us all just how much happier cakes make us. Lisa-Jo Harvey, Senior Brand Manager, Premier Foods said “We can’t think of a better way to show people that life is better with cake than to create an edible poster made out of thousands of our exceedingly good cakes.” David Masterman, Creative Director, JWT London explains "If Mr Kipling himself was doing a poster, he'd make it out of cake.” Other agencies involved in the wider campaign include digital agency Outside Line, Media agency Carat and Cirkle for PR.​ 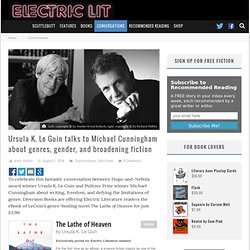 Le Guin and Pulitzer Prize winner Michael Cunningham about writing, freedom, and defying the limitations of genre, Diversion Books are offering Electric Literature readers the eBook of LeGuin’s genre-busting novel The Lathe of Heaven for just $3.99: Michael Cunningham: Writers are always, pretty much by definition, writing within a historical period, though that period may not acquire a name until later. I don’t believe the Victorians thought of themselves as the Victorians.

OK, the Modernists thought of themselves as Modernists, but still… I wonder sometimes what period we’re in, in 2014. ​Mood Indigo Takes You Into a Twee Posthuman World. FUTURE COAST dot org - About. British Isles in 2100 by JaySimons on deviantART. Clive Thompson: “Reading poetry shakes up my brain” — The Most Powerful Drug. Clive Thompson’s new book, Smarter Than You Think: How Technology is Changing Our Minds For the Better, was published in 2013 by Penguin. 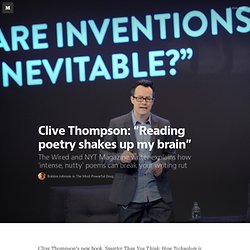 He’s a contributing writer to the New York Times Magazine and Wired. We asked him how he writes. What’s the one thing you’ve learned over time that you wish you knew when you started out? That the craft of long-form magazine writing shares a common language with cinema and documentary film-making. I first encountered this idea back in 1998 when I read a profile in the Globe and Mail of Malcolm Gladwell. Long-form magazine writing employs very similar techniques. Story, Sci-Fi & Transmedia to develop Corporate Technology Strategies. How to Tell The Future(s) In 1972 the Club of Rome, an international think tank, commissioned four scientists to use computers to model the human future. 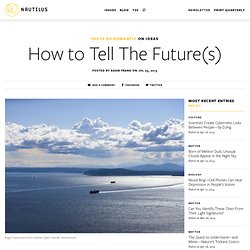 The result was the infamous Limits to Growth that crashed into world culture like an asteroid from space. The Most Terrifying Video You'll Ever See 2. Pixar's 22 Rules of Storytelling. Note: This article is included in our year-end storytelling advice round-up. 8 Tips For Creating Great Stories From George R.R. Martin, Junot Diaz, And Other Top Storytellers. What the hell is a Story Lizard? In Wonderbook: The Guide to Creating Imaginative Fiction (Abrams Books, October 15), Story Lizards join Prologue Fish and other infographic helpmates designed to banish dry textual analysis in favor of a kicking, screaming, slithering approach to storytelling creativity. Author Jeff Vandermeer, a three-time Fantasy World Award-winning novelist who co-directs the Shared Worlds teen writing camp, says "The way we're taught to analyze fiction is to break down and do a kind of autopsy.

But I think writers need to be more like naturalists or zoologists when they study story because then you're looking at how all the elements fit together. " Enter the Story Lizard, above, illustrated by Jeremy Zerfoss. Welcome to Ted Cruz’s Thunderdome. Candy 2010 - The Futures of Everyday Life. Financial Scenarios for Asia and the World. A review of scenario planning. As Worries Over the Power Grid Rise, a Drill Will Simulate a Knockout Blow. The Rules of Quick and Dirty Worldbuilding.

How to Legalize Pot. So I was interested to learn, 11 years later, that Kleiman is leading the team hired to advise Washington State as it designs something the modern world has never seen: a fully legal commercial market in cannabis. Washington is one of the first two states (Colorado is the other) to legalize the production, sale and consumption of marijuana as a recreational drug for consumers 21 and over. The marijuana debate has entered a new stage. Today the most interesting and important question is no longer whether marijuana will be legalized — eventually, bit by bit, it will be — but how . First trailer for Elysium proves that Neill Blomkamp's still got it. Hopefully it will be as nuanced as 90 to 120 minutes and Hollywood focus groups will allow it to be. Nose BETA. Amazon Announces Purchase of English™

SEATTLE – Amazon announced today that it has acquired the English language and plans to fully privatize the world’s predominant mode of written communication. What makes a great screenplay? Every Nation for Itself: Winners and Losers in a G-Zero World. Ernest Callenbach, Last Words to an America in Decline. Thirty-five years later, it was still on my bookshelf in a little section on utopias (as well it should have been, being a modern classic).

A friend had written his name inside the cover and even dated it: August 1976, the month I returned to New York City from years of R&R on the West Coast. Her future. Scenario Planning in Action: What, Why, Success Factors, and Process. Delivering Tomorrow - Logistics 2050. Exploring the World, Note by Note. Map makers: Messages posted by Pinwheel users in San Francisco. 10 Ways The World Will Probably End. Metaphysical Hangover Cure: 2012 Doomsday Scenarios! Open Planet Ideas. Google. Scenarios.