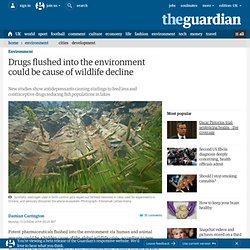 The scientists warn that worldwide use of the drugs, which are designed to be biologically active at low concentrations, is rising rapidly but that too little is currently known about their effect on the natural world. A Breathing Earth. Here's a view looking at one year of seasonal transformations on Earth. 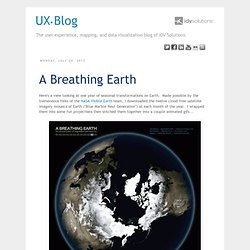 Made possible by the tremendous folks of the NASA Visible Earth team, I downloaded the twelve cloud-free satellite imagery mosaics of Earth ("Blue Marble Next Generation") at each month of the year. I wrapped them into some fun projections then stitched them together into a couple animated gifs... Don't click this small version or this tiny version. Click here to see the irrationally large version (8.9 MB). Lifemapper Web App. <div class="noscript-warning"><div class="noscript-content"> The Lifemapper Test Drive requires javascript to be turned on in your browser. 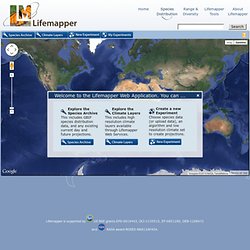 Please make that change in your browser preferences before continuing. </div></div> Imagery ©2014 NASA, TerraMetrics Terms of Use Map. Could great walls prevent tornadoes forming in the American Midwest? The Great Wall of China was primarily built to keep out nomadic tribes, but a new study suggests constructing great walls in the American Midwest could keep out a different kind of threat – tornadoes. 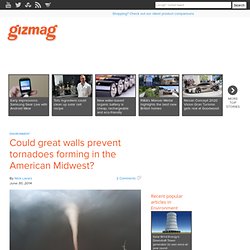 It might sound far-fetched, but a study conducted by Dr. Rongjia Tao from the Department of Physics at Philadelphia's Temple University suggests there is in fact some scientific merit to it. National Climate Assessment. Climate change, once considered an issue for a distant future, has moved firmly into the present. 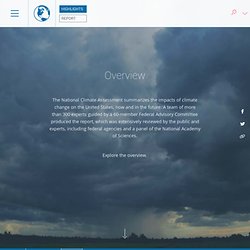 Corn producers in Iowa, oyster growers in Washington State, and maple syrup producers in Vermont are all observing climate-related changes that are outside of recent experience. So, too, are coastal planners in Florida, water managers in the arid Southwest, city dwellers from Phoenix to New York, and Native Peoples on tribal lands from Louisiana to Alaska. This National Climate Assessment concludes that the evidence of human-induced climate change continues to strengthen and that impacts are increasing across the country.

Americans are noticing changes all around them. Summers are longer and hotter, and extended periods of unusual heat last longer than any living American has ever experienced. ©Ted Wood Photography Other changes are even more dramatic. Scientists who study climate change confirm that these observations are consistent with significant changes in Earth’s climatic trends. Potential climate engineering effectiveness and side effects during a high carbon dioxide-emission scenario : Nature Communications. Model trends during the RCP 8.5 climate change scenario The UVic model has recently been evaluated in several model intercomparison exercises9, 10, 11 and generally has a similar response to CO2 emission forcing as other models. 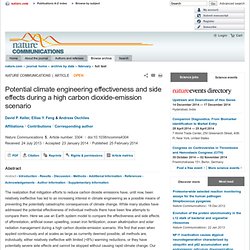 Climate change: how a warming world is a threat to our food supplies. When the Tunisian street vendor, Mohamed Bouazizi, set himself on fire on 17 December 2010, it was in protest at heavy-handed treatment and harassment in the province where he lived. 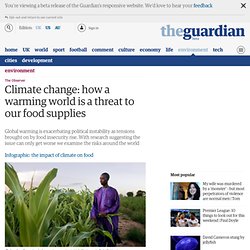 British Isles in 2100 by JaySimons on deviantART. Death by sludge, coal and climate change for Great Barrier Reef? There's a phrase environmental scientists and campaigners like to use to talk about the slow and relentless degradation and destruction of habitats and natural wonders. 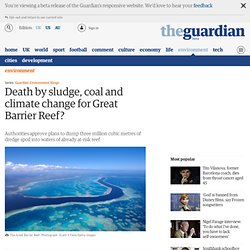 "Death by a thousand cuts", they call it, as small chunks of habitat are lost and environmental laws are eased or repealed. A bit of bush here for a tourism development, a stand of mangroves there for a beachside resort. An entire nature reserve for a coal mine. Sometimes, the threats come like pincer movements with all angles covered. Rising Seas - Interactive: If All The Ice Melted. The seven deadly sinners driving global warming - environment - 15 January 2014. IT'S a chart that no one wants to top, but global warming's worst offenders, in absolute terms, are the US, China, Russia, Brazil, India, Germany and the UK. 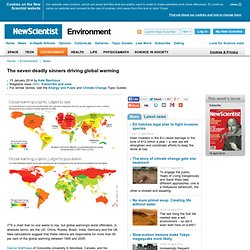 New calculations suggest that these nations are responsible for more than 60 per cent of the global warming between 1906 and 2005. Damon Matthews of Concordia University in Montreal, Canada, and his colleagues calculated national contributions to warming by weighting each type of emission according to the atmospheric lifetime of the temperature change it causes. Using historical data, they included carbon dioxide from burning fossil fuels and changes in land use – such as deforestation. Earth wind map. The World Outside My Window - Time Lapse of Earth from the ISS (4K) Admit it: we can't measure our ecological footprint - opinion - 25 November 2013. Read full article. 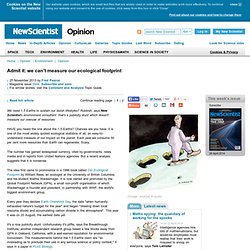 Future Earth. Gaia, the Earth goddess, is often invoked to personify the way the biosphere and other Earth systems interact. But although the usual implication is that life helps maintain an environment suitable for its continued existence, it isn’t always clear exactly what the name signifies. Scientifically, the Gaia hypothesis – or Gaia theory as some would have it – is at the same time controversial and frustratingly fuzzy. There are plenty of disagreements about its status, but it can be hard to pin down exactly what the disagreements are about. Two new books help make things clearer. The actual probability of Earth going to hell in the next few decades.

*sigh* How science fiction could get climate change right. Tackling 'big' issues in fiction, whatever genre, is a tough act to pull off. Movies (okay, cinema) can't really address this sort of topic effectively. Something like The Road gives us a slice, following two characters only, and doesn't say much about what's going on, which is understandable, given that the characters themselves don't seem to know what's gone wrong, only that their world sucks, big time.

One might see the DUNE series as an environmentally-based plot line, with terraforming, adaptations, bioengineering, etc. but I don't know if most readers see it that way. (Let's not talk about the AI issues raised in the 'prequels'.) I share your interest in such an idea. US coastal cities in danger as sea levels rise faster than expected, study warns. Sea-level rise is occurring much faster than scientists expected – exposing millions more Americans to the destructive floods produced by future Sandy-like storms, new research suggests.

Satellite measurements over the last two decades found global sea levels rising 60% faster than the computer projections issued only a few years ago by the United Nations' Intergovernmental Panel on Climate Change. The faster sea-level rise means the authorities will have to take even more ambitious measures to protect low-lying population centres – such as New York City, Los Angeles or Jacksonville, Florida – or risk exposing millions more people to a destructive combination of storm surges on top of sea-level rise, scientists said. Scientists earlier this year found sea-level rise had already doubled the annual risk of historic flooding across a widespread area of the United States. Researchers used satellite data to measure sea-level rise from 1993-2011. US coastal cities in danger as sea levels rise faster than expected, study warns. The Pacific islands: Sea change. Is Geoengineering a Silver Bullet for Climate Change? Gorgeous Glimpses of Calamity.

U. The 16 scariest maps from the E.U.’s massive new climate change report. The Big Melt WWF. Mammals may not get to cool climates in time. U. Geoengineering experiment cancelled due to perceived conflict of interest. Report: Global biodiversity down 30 percent in 40 years - Technology & science - Science - LiveScience. WWF says over-consumption threatens planet. Estimating the future contribution of continental ice to sea-level rise.

Connect the Dots. Too hot not to notice? Connecting the dots on climate. A Space-Faring Backup for Earth’s Biota. The Washington Post speaks the truth on climate change. How Rio+20 can herald a constitutional moment. A science fictional map of San Francisco as an archipelago city. A brief guide to the scientific consensus on climate change.