Covert Drone War. Taste for Makers. February 2002 I was talking recently to a friend who teaches at MIT. 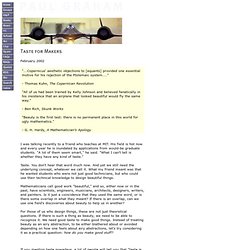 His field is hot now and every year he is inundated by applications from would-be graduate students. "A lot of them seem smart," he said. "What I can't tell is whether they have any kind of taste. " Taste. What Makes Rituals Special? Join Us For A Google+ Conversation. 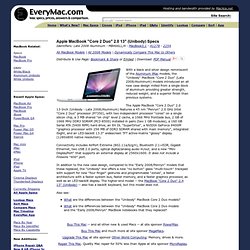 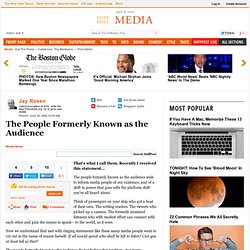 Recently I received this statement... The people formerly known as the audience wish to inform media people of our existence, and of a shift in power that goes with the platform shift you've all heard about. Think of passengers on your ship who got a boat of their own. The writing readers. The viewers who picked up a camera. Now we understand that met with ringing statements like these many media people want to cry out in the name of reason herself: If all would speak who shall be left to listen? The people formerly known as the audience do not believe this problem--too many speakers! The people formerly known as the audience are those who were on the receiving end of a media system that ran one way, in a broadcasting pattern, with high entry fees and a few firms competing to speak very loudly while the rest of the population listened in isolation from one another-- and who today are not in a situation like that at all.

How to Worry Less About Money. By Maria Popova What Goethe can teach us about cultivating a healthy relationship with our finances. 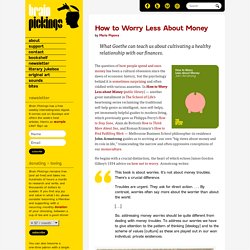 The question of how people spend and earn money has been a cultural obsession since the dawn of economic history, but the psychology behind it is sometimes surprising and often riddled with various anxieties. In How to Worry Less about Money (public library) — another great installment in The School of Life’s heartening series reclaiming the traditional self-help genre as intelligent, non-self-helpy, yet immensely helpful guides to modern living, which previously gave us Philippa Perry’s How to Stay Sane, Alain de Botton’s How to Think More About Sex, and Roman Krznaric’s How to Find Fulfilling Work — Melbourne Business School philosopher-in-residence John Armstrong guides us to arriving at our own “big views about money and its role in life,” transcending the narrow and often oppressive conceptions of our monoculture.

This book is about worries. It’s not about money troubles. The U.S. 11 Profiles in Bad Leadership Behavior. CIO — Most of us have worked for a bad supervisor at one point in our lives. 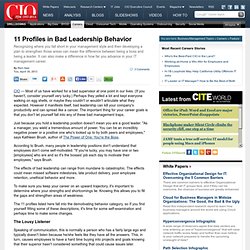 (If you haven't, consider yourself very lucky.) Perhaps they yelled a lot and kept everyone walking on egg shells, or maybe they couldn't or wouldn't articulate what they expected. However it manifests itself, bad leadership can kill your company's productivity and can spread like a cancer. The important thing for your career goals is that you don't let yourself fall into any of these bad management traps.

Just because you hold a leadership position doesn't mean you are a good leader. According to Brush, many people in leadership positions don't understand that employees don't come self-motivated. The effects of bad leadership can range from mundane to catastrophic. To make sure you keep your career on an upward trajectory, it's important to determine where your strengths and shortcomings lie. The Lousy Listener. A story for tomorrow. Pearltrees tips.

Motorcycles. Music. 1966 F100. Bicycling. Writing and Writers. Sites I Write For. How I Built A Blog To More Than 70,000 Subscribers In 21 Months. According to one source, there are more than 164 million blogs... ...Most of which get less than 1,000 visitors per month, and, for the lack of a better word, are business failures. 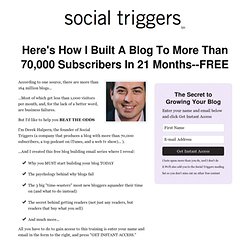 But I'd like to help you BEAT THE ODDS I'm Derek Halpern, the founder of Social Triggers (a company that produces a blog with more than 70,000 subscribers, a top podcast on iTunes, and a web tv show)... ). ...And I created this free blog building email series where I reveal: Why you MUST start building your blog TODAY The psychology behind why blogs fail The 3 big "time-wasters" most new bloggers squander their time on (and what to do instead) The secret behind getting readers (not just any readers, but readers that buy what you sell) And much more... All you have to do to gain access to this training is enter your name and email in the form to the right, and press "GET INSTANT ACCESS. "