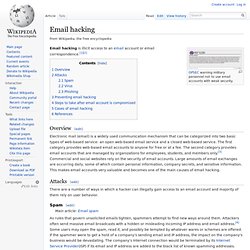 Email hacking is illicit access to an email account or email correspondence.[1][2] Overview[edit] Privacy Act 1993 No 28 (as at 13 September 2014), Public Act Contents. An Act to promote and protect individual privacy in general accordance with the Recommendation of the Council of the Organisation for Economic Co-operation and Development Concerning Guidelines Governing the Protection of Privacy and Transborder Flows of Personal Data, and, in particular,— 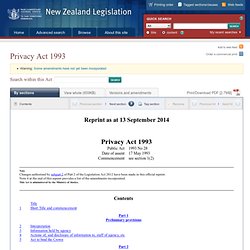 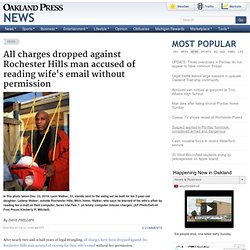 Leon Walker announced the news on his blog at leonwalker.com Thursday under the heading "I Am Free. " "I'm pleased to finally have this off my back, and I'm looking forward to being able to focus on my daughter and making sure she's protected," Walker said Thursday afternoon. Advertisement "Now I'm able to focus on just her and not worry about this other campaign against me. " Walker said it will take some time to adjust to the end of the legal proceedings. "I feel like I've come out of a war," he said. "I've been tucked away in the bunker. Walker appeared in court earlier this week for what was to be the beginning of his trial on two counts of unauthorized access to a computer. The trial on that charge was adjourned for 10 days, as the prosecutor assigned to the case injured his foot over the weekend.

Husband facing five years in jail after hacking wife's email. When his wife realised her emails had been read she went to the authorities and press charges. 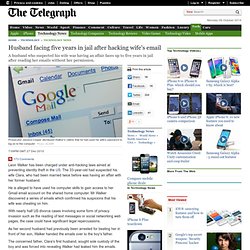 She later split up from Walker and the couple were divorced earlier this month, when he was arrested for hacking. Prosecutors in Oakland County, Michigan, charged Walker under the state's anti-hacking laws which were aimed at stopping identity theft and used to prosecute people who hack into Government computers. Prosecutor Jessica Cooper dismissed Walker's claims that he had used his wife's password to log on to the computer. Email Law. Introduction Electronic mail (e-mail) is a way of sending text, graphics, and computer files from one computer to another computer. 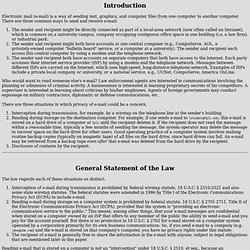 There are three situations in which privacy of e-mail could be a concern. General Statement of the Law extension of old law The landmark case of Katz v. Id. at 583. The Universal Declaration of Human Rights. Is accessing your spouse’s email account hacking? Leon Walker from Michigan has been charged with hacking having accessed his wife’s email account. 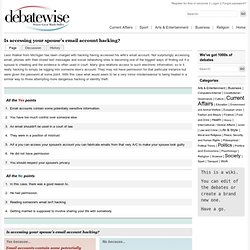 Not surprisingly accessing email, phones with their stored text messages and social networking sites is becoming one of the biggest ways of finding out if a spouse is cheating and the evidence is often used in court. Many give relations access to such electronic information, so is it really hacking to simply be logging into someone else’s account. 15 Statistics that Prove Email Marketing is (Still) Not Dead in 2014 - Capterra Blog. UPDATE: 2/4/2016 – And even a few years later, email marketing is still far from dead! 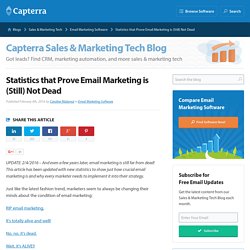 This article has been updated with new statistics to show just how crucial email marketing is and why every marketer needs to implement it into their strategy. Just like the latest fashion trend, marketers seem to always be changing their minds about the condition of email marketing: RIP email marketing. It’s totally alive and well! No, no, it’s dead. Wait, it’s ALIVE!! So, what’s going on? Here are some statistics and studies over the last few years that agree with my feelings about the future of email marketing: 1. 2. 33% of email opens occurred on an iPhone, while Gmail, second to the iPhone for opens, only accounted for 15% of those opens. 3. 4. 75% of Gmail’s 900 million users access their accounts on mobile devices. 5. 6. 7. 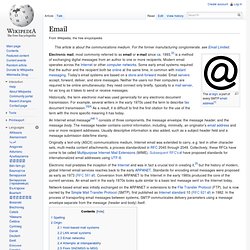 For example, several writers in the early 1970s used the term to describe fax document transmission.[3][4] As a result, it is difficult to find the first citation for the use of the term with the more specific meaning it has today. An Internet email message[NB 1] consists of three components, the message envelope, the message header, and the message body. The message header contains control information, including, minimally, an originator's email address and one or more recipient addresses.

Usually descriptive information is also added, such as a subject header field and a message submission date/time stamp. Originally a text-only (ASCII) communications medium, Internet email was extended to carry, e.g. text in other character sets, multi-media content attachments, a process standardized in RFC 2045 through 2049. Spelling[edit] There is also some variety in the plural form of the term.