Quokkalab. Хитека. MeshEdit. The Proving Ground by Nathan Miller. 4D Noise. This component creates Perlin and Simplex noise. In the Grasshopper scripting on RhinoCommon here at McNeel Europe we teach to program a component that does this, in C# and Vb.Net. Grasshopper contains a 1D Perlin noise function (similar to sines summations), but this functionality cannot be directly extended to more dimensions. This add-on forms smooth 4D Perlin noise and Simlex noise, two very well-known smooth noise functions investigated by Ken Perlin.

Inputs are: - a point pt: the location to sample - a number (double) t: the "location" in time - a scale (number): a multiplier to change the scale of the values passed by pt and t To install this component: - download the assembly to your desktop. Scarab. WeaverBird 0.5.20 NewYear. Weaverbird is a topological modeler that contains many of the known subdivision and transformation operators, readily usable by designers. 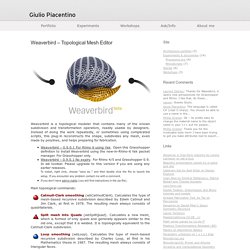 Instead of doing the work repeatedly, or sometimes using complicated scripts, this plug-in reconstructs the shape, subdivides any mesh, even made by polylines, and helps preparing for fabrication. Mohammad Rahmani Asl. RABBIT: Tools for Grasshopper by MORPHOCODE. Rabbit provides an easy way to explore natural phenomena such as pattern formation, self-organization and emergence. 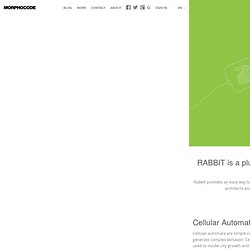 The add-on gives architects and designers the opportunity to integrate these models of organization in their own designs. Learn Rabbit Cellular automata are simple computer programs that can generate complex behavior. Cellular Automata have been widely used to model city growth and urban sprawl. RABBIT provides an easy way to run multiple types of Cellular Automata straight into Grasshopper & Rhino. Learn More. Nathan's Revit API Notebook. <<< Return to the Program Lab This page is my personal diary for exploring the API for Revit and Vasari. 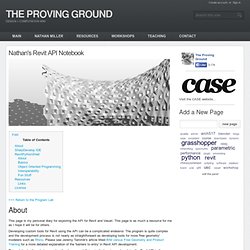 This page is as much a resource for me as I hope it will be for others. Developing custom tools for Revit using the API can be a complicated endeavor. The program is quite complex and the development process is not nearly as straightforward as developing tools for more 'free geometry' modelers such as Rhino. Please see Jeremy Tammik's article titled BIM versus Free Geometry and Product Training for a more detailed explanation of the 'barriers to entry' in Revit API development. This notebook attempts to remedy a few 'resource deficiencies' in learning and applying the Revit API in the context of a design workflow… Firefly - Firefly Labs Home. CHAMELEON « HIROSHI JACOBS. Chameleon is a plugin for Grasshopper and Revit with a focus on interoperability. 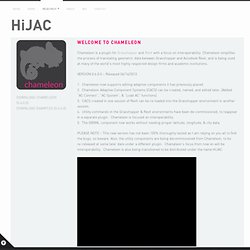 Chameleon simplifies the process of translating geometric data between Grasshopper and Autodesk Revit, and is being used at many of the world’s most highly respected design firms and academic institutions. VERSION 0.4.0.0 – Released 06/14/2013 Chameleon now supports editing adaptive components it has previously placed.Chameleon Adaptive Component Systems (CACS) can be created, named, and edited later, (Added “AC Connect”, “AC System”, & “Load AC” functions).CACS created in one session of Revit can be re-loaded into the Grasshopper environment in another session.Utility commands in the Grasshopper & Revit environments have been de-commissioned, to reappear in a separate plugin. 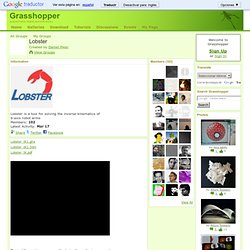 I've been meaning to release this for some time - I was intending to clean it up some more and maybe compile it into a proper component first, but have been too busy with other activities, and rather than delay any longer have decided to share it in its current state. It is a purely geometric solution, specific to this particular joint configuration, which allows kinematic decoupling, greatly simplifying things. Luckily most commercial 6-axis arms follow this configuration. Bear in mind the angle value outputs are not yet calibrated - one would need to check the direction and start angles to make sure they corresponded with the standard format. The example model here is a Kuka KR-150, but it is designed so that one can easily swap the input model with other robots with the same joint configuration (6-axis with a spherical wrist). SPM Vector Components. @ [ u t o ] 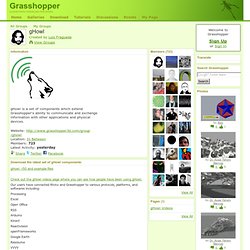 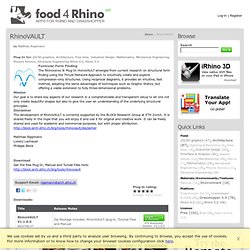 Using reciprocal diagrams, it provides an intuitive, fast method, adopting the same advantages of techniques such as Graphic Statics, but offering a viable extension to fully three-dimensional problems. Mission Our goal is to share key aspects of our research in a comprehensible and transparent setup to let one not only create beautiful shapes but also to give the user an understanding of the underlying structural principles. Disclaimer The development of RhinoVAULT is currently supported by the BLOCK Research Group at ETH Zurich.

Matthias Rippmann Lorenz Lachauer Philippe Block. Nicholas de Monchaux. Shortest Walk Gh. The ShortestWalk add-on for Grasshopper exposes one component which, given a network of curves and a list of lines, calculates the shortest route from line start point to line end points in a network. It is based on a topology calculator and the A* search algorithm. To install: Prc - parametric robot control for Grasshopper. Home > Groups > KUKA|prc - parametric robot control for Grasshopper New features of the version are marked in BLUE . The experimental release is based on a rewritten and improved code-base and includes various new, exciting features that are marked in RED . Robot control file generation for nearly all KUKA robots, including the new KRC4 control unit Full kinematic robot simulation. KARAMBA3D. 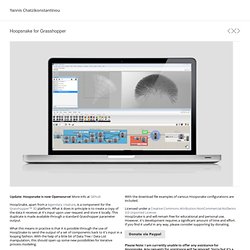 More info at Github HoopSnake, apart from a legendary creature, is a component for the Grasshopper™ 3D platform. What it does in principle is to create a copy of the data it receives at it's input upon user request and store it locally. This duplicate is made available through a standard Grasshopper parameter output. What this means in practice is that it is possible through the use of HoopSnake to send the output of a set of components back to it's input in a looping fashion. The loop can be stopped at any point either by the user or automatically by setting a termination condition (the third input of the component) to false. With the download file examples of various Hoopsnake configurations are included. 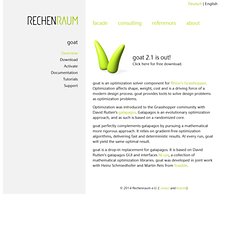 GBL DIGITAL - 01100100011010010110011101101001011101000110000101101100. Download SpiderWeb is a .NET library providing functionality for preforming calculations on graphs. The library is created with a special focuse on the integration of graphs and graph related theroies (e.g. SpaceSyntax) in parametric design envoirnments. Therefore special Versions are avalible for: GrasshopperDesignScript (planned) Elk. Elk is a set of tools to generate map and topographical surfaces using open source data from OpenStreetMap.org and Shuttle Radar Topography Mission (SRTM) data from USGS. 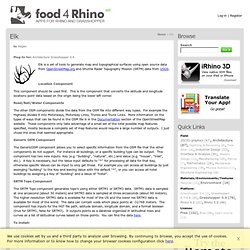 Location Component. Slingshot! Plug-Ins - SLINGSHOT! Horster Tools. HorsterReference tools make it easy to reference objects by type, layer and other attributes from Rhino to Grasshopper. for now it consists of five components: Reference by layer - gets the Guids of objects that are on specified layer.Reference by type - gets the Guids of object of specified type.Reference by attributes - allows the user to filter the objects in Rhino document depending on their name, type, layer and colorRead text objects - references all dots and annotation from Rhino document into Grasshopper. Returns the origin points and the strings.

*NEW* Read attributes - gets the name, layer, color, material and type from the objects ID.