Download dSploit.apk. Why Are You Still Using Microsoft Word? 22 Hacking Sites, CTFs and Wargames To Practice Your Hacking Skills. InfoSec skills are in such high demand right now. 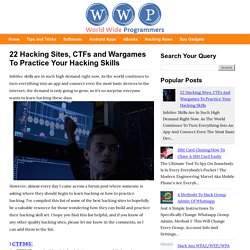 As the world continues to turn everything into an app and connect even the most basic devices to the internet, the demand is only going to grow, so it’s no surprise everyone wants to learn hacking these days. Best Privacy Tools. InfoSec Institute - Information Security Training and IT Boot Camps. Understanding and selecting authentication methods. If you are serious about computer/network security, then you must have a solid understanding of authentication methods. 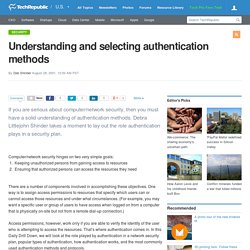 Debra Littlejohn Shinder takes a moment to lay out the role authentication plays in a security plan. Computer/network security hinges on two very simple goals:Keeping unauthorized persons from gaining access to resourcesEnsuring that authorized persons can access the resources they needThere are a number of components involved in accomplishing these objectives. One way is to assign access permissions to resources that specify which users can or cannot access those resources and under what circumstances. Wire Shark. Malware trends and cyber security considerations for 2015. Last year was a banner one for breaches, cyber attacks and advanced malware. 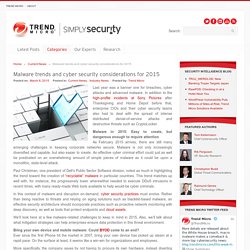 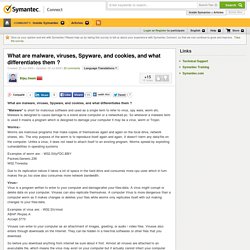 "Malware" is short for malicious software and used as a single term to refer to virus, spy ware, worm etc. Malware is designed to cause damage to a stand alone computer or a networked pc. So wherever a malware term is used it means a program which is designed to damage your computer it may be a virus, worm or Trojan. Worms:- Worms are malicious programs that make copies of themselves again and again on the local drive, network shares, etc.

The only purpose of the worm is to reproduce itself again and again.

Virus & stuff. Altieres Rohr. Hacking & cyberactivism. Cryptography. Cypherpunks - The Book. How Can I Tell If I'm Being Monitored at Work and What Can I Do About It? #BrasilExposed: a crise de segurança na internet brasileira - TecMundo. 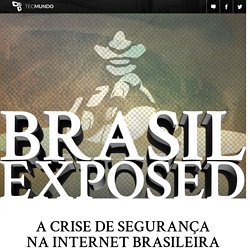 “Fizemos testes nos sites apontados por você e comprovamos que não se trata do nosso produto e não existe nenhuma consulta apontando para nossos servidores”, comenta Wellington Galvão, sócio-diretor da empresa. The death of privacy. We have come to the end of privacy; our private lives, as our grandparents would have recognised them, have been winnowed away to the realm of the shameful and secret. 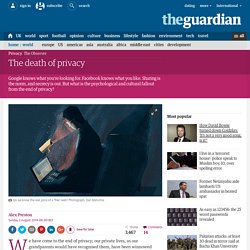 To quote ex-tabloid hack Paul McMullan, "privacy is for paedos". How technical illiteracy threatened the privacy of hundreds of retired police officers. By Nathaniel Mott On March 18, 2014 The names, addresses, and social security numbers of 300 retired police officers and their dependents in Syracuse, New York were mistakenly shared Friday when a city employee sent an email with “an attachment” containing all of that information to another retired officer. 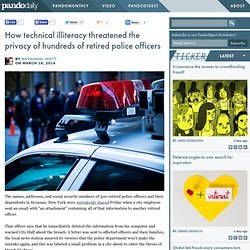 That officer says that he immediately deleted the information from his computer and warned City Hall about the breach. A letter was sent to affected officers and their families, the local news station assured its viewers that the police department won’t make the mistake again, and this was labeled a small problem in a city about to enter the throes of March Madness. How Your Data Are Being Deeply Mined by Alice E. Marwick. The recent revelations regarding the NSA’s collection of the personal information and the digital activities of millions of people across the world have attracted immense attention and public concern. 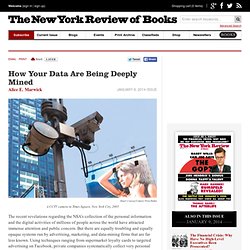 But there are equally troubling and equally opaque systems run by advertising, marketing, and data-mining firms that are far less known. Using techniques ranging from supermarket loyalty cards to targeted advertising on Facebook, private companies systematically collect very personal information, from who you are, to what you do, to what you buy. For sale: Systems that can secretly track where cellphone users go around the globe. Makers of surveillance systems are offering governments across the world the ability to track the movements of almost anybody who carries a cellphone, whether they are blocks away or on another continent. 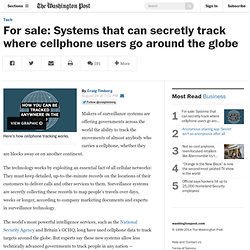 The technology works by exploiting an essential fact of all cellular networks: They must keep detailed, up-to-the-minute records on the locations of their customers to deliver calls and other services to them. Surveillance systems are secretly collecting these records to map people’s travels over days, weeks or longer, according to company marketing documents and experts in surveillance technology. The world’s most powerful intelligence services, such as the National Security Agency and Britain’s GCHQ, long have used cellphone data to track targets around the globe. But experts say these new systems allow less technically advanced governments to track people in any nation — including the United States — with relative ease and precision. Top 15 Open Source/Free Security/Hacking Tools. 1. 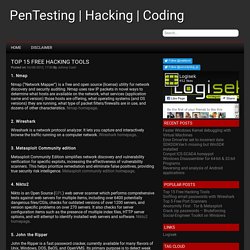 So we turn to technology to protect us. The problem is that technological security measures aren't free. They cost money, of course, but they cost other things as well. PirateBrowser - No More Censorship! PRISM-style surveillance is global, Julian Assange says. Governments around the world have surveillance programs similar to PRISM but they have not been as effective as in the United States, Julian Assange has said in an address to Sydney University. The WikiLeaks founder delivered the keynote address to close the 19th International Symposium on Electronic Art on Thursday night via video link from the Ecuadorian embassy in London. In a wide-ranging speech he covered military surveillance, the WikiLeaks party and Google's relationship with the US government. Ruling could force Americans to decrypt laptops.

American citizens can be ordered to decrypt their PGP-scrambled hard drives for police to peruse for incriminating files, a federal judge in Colorado ruled today in what could become a precedent-setting case. Judge Robert Blackburn ordered a Peyton, Colo. woman to decrypt the hard drive of a Toshiba laptop computer no later than February 21 -- or face the consequences, presumably including contempt of court. Julian Assange: Edward Snowden é um herói.