3 Out of Every 4 People Who Die In Jail Have Not Been Convicted of a Crime. A new report released by the Bureau of Justice Statistics has shown that an overwhelming amount of inmates who die in police custody actually haven’t been convicted of a crime. 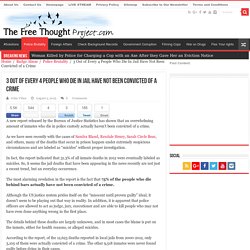 Private Prisons Threaten To Sue States Unless They Get More Inmates For Free ... Freedom is apparently bad for business. 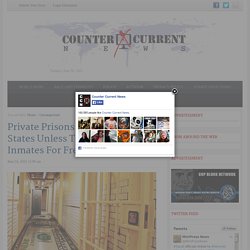 That’s the message from the private prison industry which is threatening to sue states if they don’t start locking more people up. The private prison companies, well-known for profiting off of incarceration and crime, is now saying that the state’s they have contracted with aren’t keeping up their end of the bargain. The private prisons rely on a certain number of inmates for free and virtually-free slave labor. That labor is used for a variety of trades, including making uniforms for popular restaurants like McDonalds and Applebee’s. But if the private prisons don’t have enough inmates locked up then production goes down correlative with the decrease in free labor (i.e. slavery). It comes as a surprise to many Americans, but slavery was never actually abolished in the United States. “Disruptive Hooliganism” Vs. American [Dumb]ocracy. Florida Death Camps? Record 346 Inmates Died While Locked in Florida Prisons ... Tallahassee, Fla. – The U.S prison industrial complex is spiraling out of control as the prison crisis in America grows to pandemic proportions. 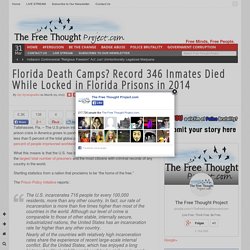 While accounting for slightly less than 5 percent of the total global population, the U.S. incarcerates roughly 25 percent of people imprisoned worldwide. What this means is that the U.S. has by far the highest incarceration rate in the world, the largest total number of prisoners and the most citizens with criminal records of any country in the world. What The Prison Industrial Complex Can Do For YOU! Juvenile Justice. A Most Unsurprising Riot. Originally posted on The Marshall Project. 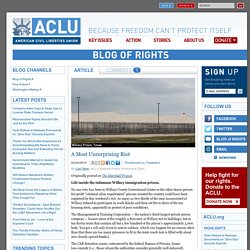 Life inside the infamous Willacy immigration prison. No one who has been to Willacy County Correctional Center or the other dozen private, for-profit "criminal alien requirement" prisons around the country could have been surprised by this weekend's riot. As many as two-thirds of the men incarcerated at Willacy refused to participate in work details and then set fire to three of the ten housing tents, apparently in protest of poor conditions. The Management & Training Corporation — the nation's third-largest private prison company — houses most of the roughly 2,800 men at Willacy not in buildings, but in ten Kevlar tents that contain all but a few hundred of the prison's approximately 3,000 beds.

Why Mass Incarceration Has Been a Costly and Utter Failure. Nadia Prupis February 14, 2015 (COMMONDREAMS) Decades of mass incarceration have proven to be a costly and ineffective strategy to reduce crime, a groundbreaking report published Thursday found. 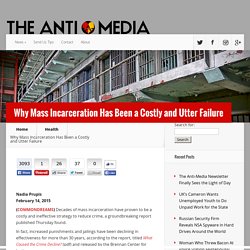 In fact, increased punishments and jailings have been declining in effectiveness for more than 30 years, according to the report, titled What Caused the Crime Decline? (pdf) and released by the Brennan Center for Justice. Violent crime rates fell by more than 50 percent between 1991 and 2013, while property crime declined by 46 percent, according to FBI statistics. Yet between 1990 and 2009, the prison population in the U.S. more than doubled, jumping from 771,243 to over 1.6 million.

Mass incarceration is “a tragedy,” writes Nobel Prize winning economist Dr. Youth jail. 6 Companies That Profit from the Police State (with Henry Rollins) 12 Major Corporations Benefiting from the Prison Industrial Complex » Element... Prison labor in the United States is referred to as insourcing. 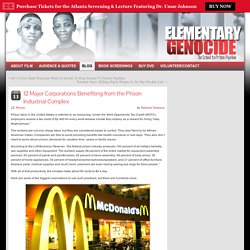 Under the Work Opportunity Tax Credit (WOTC), employers receive a tax credit of $2,400 for every work-release inmate they employ as a reward for hiring “risky target groups.” The workers are not only cheap labor, but they are considered easier to control. Cash crop. Death sentence. 1 in 4. The Modernized Slave Labor System: Also Known as the Prison Industrial Complex. Adult incarceration. Incarceration by state. Dear god that's powerful. $40,000 per inmate. The Joe Show - Cruel Trailer. Community Stories: Post Prison Education. Selfies Against the Death Penalty. Why Are We Using Prisons to Treat the Mentally Ill? Take Back Your Town. Florida fires prison guards after spate of inmate deaths. The secretary of Florida's prison system has fired nearly three dozen guards in the wake of the recent scrutiny given to inmate deaths across the state over the past few years, the Miami Herald newspaper reported. 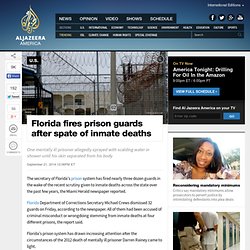 Florida Department of Corrections Secretary Michael Crews dismissed 32 guards on Friday, according to the newspaper. NDAA. The National Defense Authorization Act (NDAA) is a federal law specifying the budget and expenditures of the United States Department of Defense (DOD). 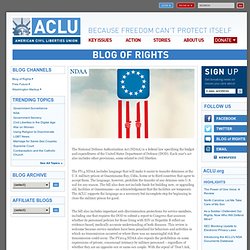 Each year's act also includes other provisions, some related to civil liberties. The FY14 NDAA includes language that will make it easier to transfer detainees at the U.S. military prison at Guantanamo Bay, Cuba, home or to third countries that agree to accept them. A Letter From Ray Jasper, Who Is About to Be Executed. How can we help put pressure on Texas to get this man's sentence commuted? 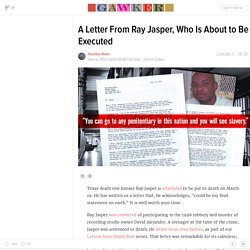 As for the imbeciles writing here about how he has it coming, three quick points. 1) If you object to the goverment's right to raise your taxes, regulate your business, or spend "your money" on various social programs, how can you then grant the government the power of life and death? You can't. Unless the killing is done in secret, and limited to a despised population.

Feature Film - The Stanford Prison Experiment (Documentary) How extreme isolation warps the mind. Sarah Shourd’s mind began to slip after about two months into her incarceration. 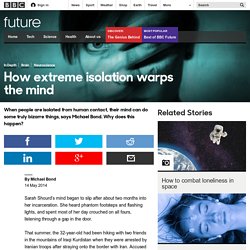 She heard phantom footsteps and flashing lights, and spent most of her day crouched on all fours, listening through a gap in the door. That summer, the 32-year-old had been hiking with two friends in the mountains of Iraqi Kurdistan when they were arrested by Iranian troops after straying onto the border with Iran. Accused of spying, they were kept in solitary confinement in Evin prison in Tehran, each in their own tiny cell. She endured almost 10,000 hours with little human contact before she was freed. 800% in 40 yrs. Executions. Pic. Prison/school. 35 euro. Prison labor’s new frontier: Artisanal foods. Some years back, a small Colorado goat-cheese maker called Haystack Mountain faced its version of a classic growth challenge: National demand was growing for its chèvres and other cheeses, and the company was struggling to find enough local goat farmers to produce milk.

The solution came from a surprising source: Colorado Corrections Industries (CCI). Today six inmates milk 1,000 goats twice a day on a prison-run farm. After non-inmate employees cultivate the cheese at a company facility, it’s sold in Whole Foods WFM -0.89% outlets, among other stores. Prison labor has gone artisanal. Sure, plenty of inmates still churn out government office furniture and the like, and incarcerated workers have occasionally been used by large companies since the late 1970s. But in recent years a new wave has begun, driven primarily by small businesses that need workers for boutique-size production.

Says John Scaggs, Haystack’s marketing and sales director, referring to CCI: “They have land. LA. War on poverty. Why is Obama's DOJ prosecuting a torture victim? Rasmea Odeh was brutally tortured into confessing a crime she did not commit. After 10 years of imprisonment, Odeh was exiled from her homeland, eventually immigrating to the United States from Jordan in 1994 as a legal resident and later becoming a naturalized citizen. For the past decade, she has gained the admiration and adulation of the Chicago community she selflessly serves, working as the associate director of the Arab American Action Network to defend civil liberties and promote immigrant rights. Last year, the Chicago Cultural Alliance bestowed on her its Outstanding Community Leader Award in recognition of her devoting "over 40 years of her life to the empowerment of Arab women.

" People such as Odeh, who demonstrate such a tremendous spirit of resiliency, capacity to overcome hardship and dedication to community empowerment, are often lauded by presidents during State of the Union addresses. In addition to this physical torture, Odeh also faced sexual torture. David Hicks Live Tweets for Torture Victims Day (with tweets) · thejustcampaign. Last Week Tonight with John Oliver: Prison (HBO) Highest to Lowest - Prison Population Total.