Last Week Tonight with John Oliver: Predatory Lending (HBO) There Is No [Banking] Solution To The Economic Crisis. Via Darren KrettMay 3, 2015 (ZEROHEDGE) A long ,long time ago… it was the 16 September 1992, Black Wednesday, when the British Government was forced to withdraw the pound sterling from the European Exchange Rate Mechanism(ERM) after it was unable to keep the pound above its agreed lower limit in the ERM. 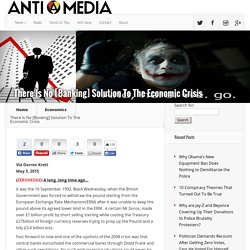 A certain Mr.Soros, made over £1 billion profit by short selling sterling while costing the Treasury £27billion of foreign currency reserves trying to prop up the Pound and a tidy £3.4 billion loss. Fast forward to now and one of the upshots of the 2008 crisis was that central banks eunuchized the commercial banks through Dodd Frank and other such regulations, for such embarrassing situations could never be repeated for a central bank.

So they took full control without impunity. There Is No [Banking] Solution To The Economic Crisis. End Scene: 11 Signs That We Are Entering The Next Phase Of The Global Economi... Michael SnyderApril 26, 2015 (THEECONOMICCOLLAPSE) Well, the Nasdaq finally did it. 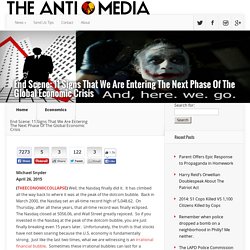 It has climbed all the way back to where it was at the peak of the dotcom bubble. Wealth Inequality in America. New Data Says 49.7 Million Are Now Poor, With 80% of the Total Population Nea... There are nearly 50 million Americans who now live below the poverty line. 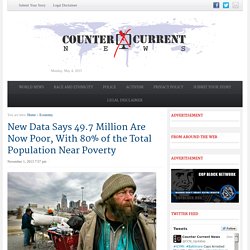 That translates to 49.7 million total. Furthermore, and just as shocking, nearly 80% of the entire U.S. population is now living near poverty or below it. Healthy News and Information. Businessinsider. Rage against the ECB: What′s Blockupy against? The Frankfurt-based European Central Bank (ECB) had scheduled Wednesday as a festive day to commemorate the official opening of the 185-meter (202-yard) tall skyscraper that will serve as its new headquarters building - a big glass tower that took five years and 1.3 billion euros ($1.4 billion) to build. 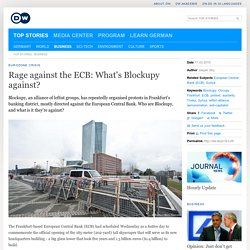 But the anti-capitalist Blockupy network has other plans. It's gearing up for a day of protest and blockade, speeches and street theater. Blockupy's goal: To draw attention to ECB policies which, they say, have favored the rich over the poor, the banks over the people, the creditor class over debtors - policies that have amounted to bailing out irresponsible financiers at the expense of ordinary citizens. The Numbers Are Staggering: U.S. Is 'World Leader' in Child Poverty. America's wealth grew by 60 percent in the past six years, by over $30 trillion. 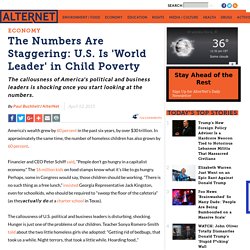 In approximately the same time, the number of homeless children has also grown by 60 percent. Financier and CEO Peter Schiff said, "People don’t go hungry in a capitalist economy. " The 16 million kids on food stamps know what it's like to go hungry. Perhaps, some in Congress would say, those children should be working. "There is no such thing as a free lunch," insisted Georgia Representative Jack Kingston, even for schoolkids, who should be required to "sweep the floor of the cafeteria" (as theyactually do at a charter school in Texas). BlackblOccupy on Vimeo. Drug and Medical Device Corporations Bribe Doctors and Hospitals $3.5 Billion...

Economy The crimes that are committed in the shadows are getting pretty absurd nowadays. 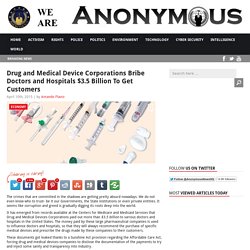 We do not even know who to trust- be it our Governments, the State institutions or even private entities. It seems like corruption and greed is gradually digging its roots deep into the world. Inequality In Action: Struggling American Families Taxed At Higher Rate Than ... Tax time: It comes with mixed feelings. 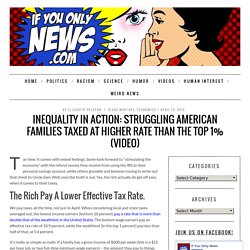 Some look forward to “stimulating the economy” with the refund money they receive from using the IRS as their personal savings account, while others grumble and bemoan having to write out that check to Uncle Sam. Well, now the truth is out. Noam Chomsky: America hates its poor. An article that recently came out in Rolling Stone, titled “Gangster Bankers: Too Big to Jail,” by Matt Taibbi, asserts that the government is afraid to prosecute powerful bankers, such as those running HSBC. 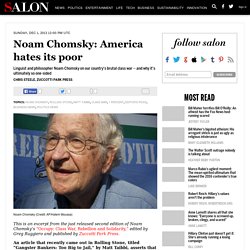 Taibbi says that there’s “an arrestable class and an unarrestable class.” What is your view on the current state of class war in the U.S.? Well, there’s always a class war going on. The United States, to an unusual extent, is a business-run society, more so than others. The business classes are very class-conscious—they’re constantly fighting a bitter class war to improve their power and diminish opposition. A Nation's Shame: Trillions in New Wealth, Millions of Children in Poverty.

(Photo: Ian Carroll)AUL BUCHHEIT FOR BUZZFLASH AT TRUTHOUT America's wealth grew by 60 percent in the past six years, by over $30 trillion. 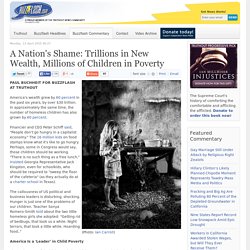 In approximately the same time, the number of homeless children has also grown by 60 percent. Here's What Could Be Fixed by the Taxes on Apple's Offshored Profits. Bill Gates Could End World Hunger, Instead Gives $36 Billion To Corporate Ame... 37% of Bill Gates’ net worth would end world hunger. 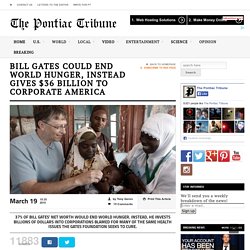 Instead, he invests billions of dollars into corporations blamed for many of the same health issues the Gates Foundation seeks to cure. Tony Geren(The Pontiac Tribune) – The Los Angeles Times revealed back in 2007 that the Bill and Melinda Gates Foundation has made millions of dollars each year from companies blamed for many of the same social and health problems the Foundation seeks to address. Four Numbers that Show the Beat Down of Middle Class America. Here's How Dangerous the Koch Brothers Really Are, By the Numbers.

By now, you've probably heard about Charles G. and David H. Koch, the incredibly wealthy libertarians at the helm of Koch Industries. Their combined net worth recently soared beyond $100 billion. Uk.businessinsider. What It’s Like To Be Black And Homeless In Seattle. By Sharon H. Chang - Guest Contributor Posted on Share this: Uk.businessinsider. If another country did it. Concerns Mounting Over Secretive Trans-Atlantic Trade Deal TTIP. “It’s not just a trade deal. It’s an unprecedented transfer of power away from democratically-elected governments toward transnational corporations,” an organizer with Global Justice Now Scotland tells MintPress News. President of France Francois Hollande, U.S. President Barack Obama, Britain’s Prime Minister David Cameron and Germany’s Chancellor Angela Merkel attend the Transatlantic Trade and Investment Partnership (TTIP) meeting at the G20 the G-20 leaders summit in Brisbane, Australia, Sunday, Nov. 16, 2014.

GLASGOW — Concerns are mounting in the United States and Europe over a controversial trade deal that critics say would remove safety standards on essential products like food and medicines, as well as dismantle financial regulations designed to prevent banks from creating another financial crisis. The U.S. first announced its intentions to begin talks with Europe in an attempt to open up markets and boost economies in February 2013. Money and the Myth of Freedom. Gregg Prescott, M.S., In5D GuestWaking Times What if EVERYONE was wealthy beyond their wildest dreams and how would that affect our perceived “freedom”?

I often use an analogy of freedom as a man walking his dog. The man is the government, you are the dog and the leash is your freedom. And this isn’t even “freedom”. These are “civil liberties”. Illegal wealth creators. I Was Homeless: Musings of a Marginalized Man. By C.K Golden Homelessness is a problem. It has always been a problem. Homelessness is an expected variable that almost never has adequate resources devoted to a meaningful solution. McD's flag. Nine Myths The Right Loves To Believe About Welfare. Military industrial complex. Forget Hillary's Emails, Here's Her Real Scandal That Nobody is Talking About. Central bank real soon. What If Everything You Knew About Poverty Was Wrong? Who Is Going To Clean Seattle's Toilets? F-35 fighter jet. 75% r children. Wall st/vets.