A Canadian City Just Eliminated Homelessnes By Doing The Opposite Of Everyone. In the Canadian town of Medicine Hat, Alberta, where 60,000 people live, everyone has a home tonight. 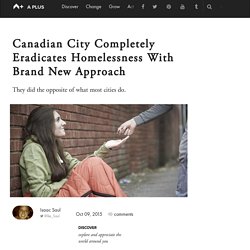 That's after six years of instituting a "Housing First" policy that flips the status quo on its head but has helped restore safety and shelter to a city that needed it. Back in 2009, Mayor Ted Clugston was actively opposing the policy, which pledges to give any person who spends ten days on the street a home. Today, he has come to realize that not only does the policy work for the people, but it works for the govenrnment, too. "This is the cheapest and the most humane way to treat people," he told CBC.

Louise Bradley, President and CEO of the Mental Health Commission of Canada, helped conduct a study that supported Clugston's claim. The one percent’s ultimate hypocrisy: They won’t move into high-rent apartmen... This article originally appeared on AlterNet. 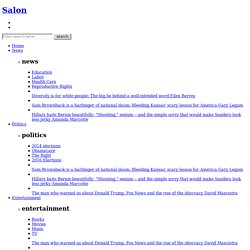 Over the summer, Fox News and the New York Post joined forces in the noble journalistic endeavor of shaming homeless people in New York City. The New York Post sent more than a dozen reporters to follow around just one homeless man and plastered a picture of him on their cover. Twice. California Photographer Captures Lit Portraits Of Homeless To Remind Us They’... Photographer Aaron Draper believes it is the duty of artists to use their talents to illuminate social issues and inspire change. 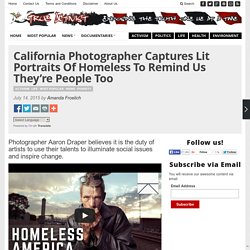 Do you believe art can change the world? I Bought Signs Homeless People Use to Beg—Here's What Happened. Sign of the Times was conceived in early October when I started to see what I perceived as a greater number of homeless people in New YorkCity. 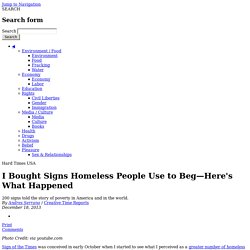 As a native New Yorker, it surprised me because I had never seen so many people begging and sleeping on the streets. It occurred to me to start buying the signs that the homeless use to ask for money. I immersed myself in the project, going out almost on a daily basis and walking five, six, seven hours a day. Once, I even walked 12 hours around the city – uptown to Harlem, East and West, downtown to Battery Park and back home to the East Village.

NYC Activists Push Back Against Anti-Homeless Crackdown. Dozens of protesters gathered in Harlem on September 9 to demand that Mayor Bill de Blasio and the New York City Police Department end their recent crackdown on the city’s homeless population. 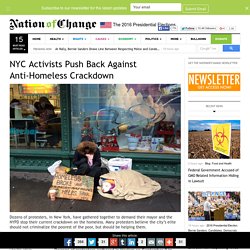 The rally, organized by the homeless-led activist group Picture The Homeless along with numerous other organizations, was set up in response to the recent eviction of a homeless encampment on 125th Street and Park Avenue. “We’re pushing back against the de Blasio administration and his Broken Windows policy,” said Nikita Price, the civil rights organizer for Picture The Homeless. “They’re targeting the poorest of the poor. This country is filling vacant homes with people who need them. Ada Colau used to be an anti-eviction activist with Spain’s indignados movement. 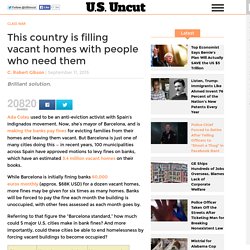 Now, she’s mayor of Barcelona, and is making the banks pay fines for evicting families from their homes and leaving them vacant. But Barcelona is just one of many cities doing this — in recent years, 100 municipalities across Spain have approved motions to levy fines on banks, which have an estimated 3.4 million vacant homes on their books. While Barcelona is initially fining banks 60,000 euros monthly (approx. $68K USD) for a dozen vacant homes, more fines may be given for six times as many homes. Banks will be forced to pay the fine each month the building is unoccupied, with other fees assessed as each month goes by. Referring to that figure the “Barcelona standard,” how much could 5 major U.S. cities make in bank fines? "ความจริงที่ไม่เห็นด้วยตา" Official HD : โดย กล้องวงจรปิด Vizer (vizer cctv) Hundred Homeless People Were Given Cameras And They Came Up With Stunning Pho... In the year 2012, a program was started in the United Kingdom called as the Café Art which brings the homeless people close to the society by making them take different photographs and making art which is then posted on the walls in different cafés. 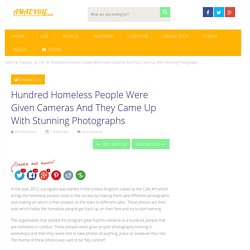 These photos are then sold which helps the homeless people get back up on their feet and try to start earning. The organization that started this program gave Fujifilm cameras to a hundred people that are homeless in London. These people were given proper photography training in workshops and then they were told to take photos of anything, place or whatever they like. The theme of these photos was said to be “My London”. A customer walked into his pizza shop and changed Philadelphia with $1 and a ... Like This Post On Facebook Philadelphia is the poorest large city in the United States. 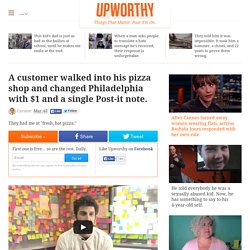 And it's the city with the worst deep poverty rate in the country, with roughly 185,000 people (including 60,000 kids) living on incomes below half of the federal poverty line. With that, homelessness is on the rise, and the city doesn't have enough resources to be there for everyone. Heavy, right? Well, I don't mean to bum you out. At one Philly pizza parlor, customers can "pay it forward" by pre-purchasing $1 slices of pizza for people in need.

Owner Mason Wartman, who left his Wall Street desk job to open Rosa's Fresh Pizza, says pay-it-forward pizza started with one customer, one dollar, and one Post-it note. Mason Wartman stands at the helm of Rosa's Fresh Pizza. The customer was inspired by an Italian coffee house practice called caffè sospeso (suspended coffee), by which customers can pre-purchase cups of coffee for less fortunate customers. As word spread, more and more customers participated. I Was Homeless: Musings of a Marginalized Man. By C.K Golden Homelessness is a problem. 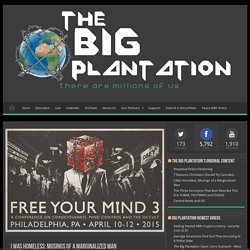 It has always been a problem. Homelessness is an expected variable that almost never has adequate resources devoted to a meaningful solution. There is another problem associated with homelessness, however. Homeless People In US Deported To Camps. It begins with the homeless. 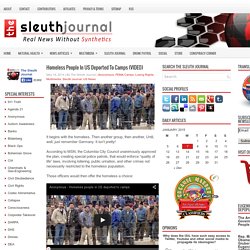 Then another group, then another, Until, well, just remember Germany. It isn’t pretty! According to MSN, the Columbia City Council unanimously approved the plan, creating special police patrols, that would enforce “quality of life” laws, involving loitering, public urination, and other crimes not necessarily restricted to the homeless population.

Those officers would then offer the homeless a choice: Go to jail for their homelessness or be shuffled to a 240-bed, 24-hour shelter on the outskirts of town, which they wouldn’t be allowed to easily leave. If they want to leave, they must get permission, set up an appointment and be shuttled by a transport van. Ex-prisoners will be shuttled there unless someone picks them up from the county jail. Sitting down. It's three times cheaper to give housing to the homeless than to keep them on... The final week of January saw an annual ritual in government statistical gathering that few people know about — the Department of Housing and Urban Development's Point-in-Time survey of the homeless population, in which HUD recruits volunteers around the country to go out and try to count up all the homeless people living in America.

This year, White House Chief of Staff Dennis McDonough even joined up, volunteering as part of the San Francisco PIT crew.