Bubonic plague. This article is about the disease in general. 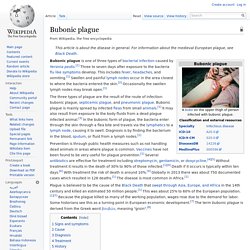 For information about the medieval European plague, see Black Death. Bubonic plague is one of three types of bacterial infection caused by Yersinia pestis.[1] Three to seven days after exposure to the bacteria flu like symptoms develop. This includes fever, headaches, and vomiting.[1] Swollen and painful lymph nodes occur in the area closest to where the bacteria entered the skin.[2] Occasionally the swollen lymph nodes may break open.[1] Rats and Mice. Rodent. The rodent fossil record dates back to the Paleocene on the supercontinent of Laurasia. 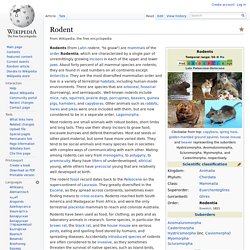 They greatly diversified in the Eocene, as they spread across continents, sometimes even finding means to cross oceans. Prevention of bubonic and pneumonic plague using plant-derived vaccines: Deakin University Library Search. Shutt up: bubonic plague and quarantine in early modern England: Deakin University Library Search. Maps & Statistics - Plague. Plague was first introduced into the United States in 1900, by rat–infested steamships that had sailed from affected areas, mostly from Asia. 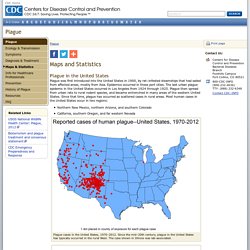 Epidemics occurred in these port cities. The last urban plague epidemic in the United States occurred in Los Angeles from 1924 through 1925. Vaccination against bubonic and pneumonic plague: Deakin University Library Search. Plague. The Plague of 1665. Plague had been around in England for centuries but in 1665 the so-called Great Plague hit the country – though it was Stuart London that took the worst of the plague. 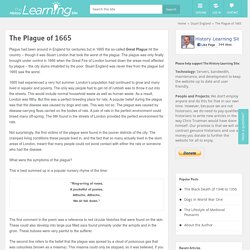 The plague was only finally brought under control in 1666 when the Great Fire of London burned down the areas most affected by plague – the city slums inhabited by the poor. Stuart England was never free from the plague but 1665 saw the worst. 1665 had experienced a very hot summer. London’s population had continued to grow and many lived in squalor and poverty. The only way people had to get rid of rubbish was to throw it out into the streets.

Not surprisingly, the first victims of the plague were found in the poorer districts of the city. Epidemics of the Past: Bubonic Plague. Ring around the rosy, A pocket full of posies, Ashes … ashes, We all fall down. 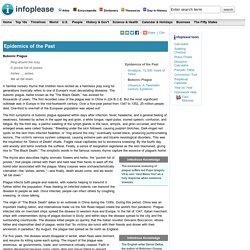 A familiar nursery rhyme that children have recited as a harmless play song for generations ironically refers to one of Europe's most devastating diseases. The bubonic plague, better known as the “The Black Death,” has existed for thousands of years. The first recorded case of the plague was in China in 224 B.C.E. But the most significant outbreak was in Europe in the mid-fourteenth century. Over a five-year period from 1347 to 1352, 25 million people died. Swine influenza. Swine influenza, also called pig influenza, swine flu, hog flu and pig flu, is an infection caused by any one of several types of swine influenza viruses. 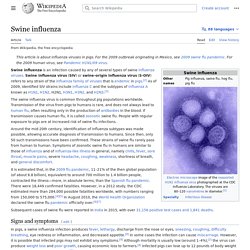 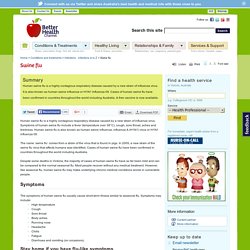 Symptoms of human swine flu include a fever (temperature over 38°C), cough, sore throat, aches and tiredness. Human swine flu is also known as human swine influenza, influenza A (H1N1) virus or H1N1 influenza 09. The name ‘swine flu’ comes from a strain of the virus that is found in pigs. In 2009, a new strain of the swine flu virus that affects humans was identified. Swine flu: are you prepared?: Deakin University Library Search. Feral Pigs. Feral Pig Herd Pigs were introduced into Australia with the arrival of European settlers. 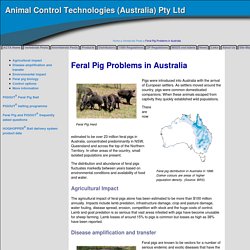 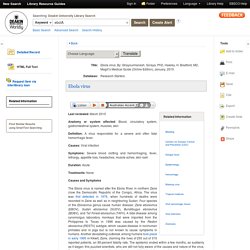 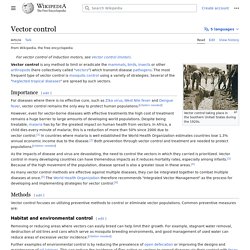 The viruses species include coronaviruses, hantaviruses, lyssaviruses, lassa virus, Ebola virus and Marburg virus. Bat-borne viruses are among the most important of the emerging viruses.[1][2][3] Transmission[edit] Vertebrate Pests. The term 'Vertebrate Pest' refers to skeletal animals that have reached a population that causes problems of an economic, social or environmental nature. In Australia, our most common pests are introduced species including rabbits, foxes, mice and rats, wild dogs, feral pigs, feral cats, and many other species that simply do not have a place in the Australian ecosystem.

That strain infected about 3,000 American soldiers during the Korean War, killing 190 by destroying their kidneys. Pests, diseases and weeds. Feral goats are highly sociable animals and form family units consisting of an adult female goat and her recent offspring. Family social units associate together to form a herd. Male kids leave their mothers and form 'bachelor' herds with similar aged males. Feral goat bachelor herds overlap with the female's home range during breeding periods but may range over much larger areas during the rest of the year. Feral goat home ranges can vary from one square kilometre when water and food are abundant, and up to 600 square kilometres for an adult male when resources are scarce. Female goats leave the group to give birth in a protected place such as a rock overhang cave or dense vegetation. 2066.pdf. Pests, diseases and weeds. Foxes are chiefly nocturnal (night time) hunters, being most active in the evenings and early mornings (crepuscular).

They prefer to feed on wild bird seed, pet food and many of the fruits and nuts (including those that people do not eat) commonly found in residential backyards. To see a video of a rat eating dog food, click here. Certain landscape plants are used as homes by roof rats and other flea-carrying animals. Pest animals. Australia's native plants and animals have adapted to life on an isolated continent over millions of years. Vector control.