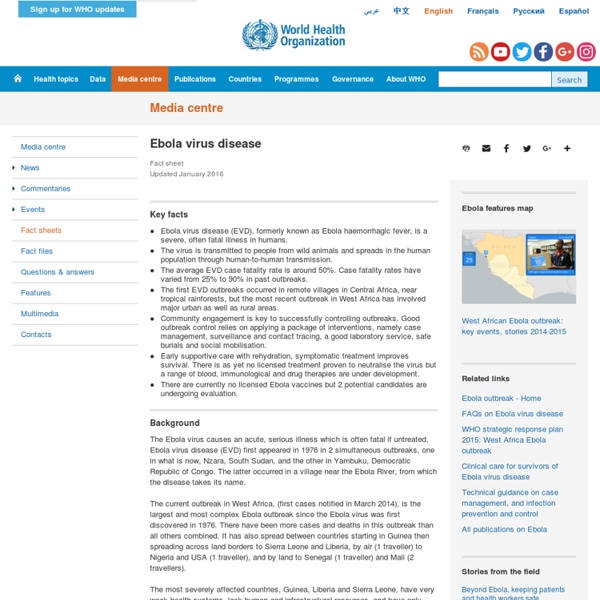 Ebola: MedlinePlus Ebola hemorrhagic fever is caused by a virus. It is a severe and often fatal disease. It can affect humans and other primates. Researchers believe that the virus first spreads from an infected animal to a human. Symptoms of Ebola may appear anywhere from 2 to 21 days after exposure to the virus. FeverHeadacheJoint and muscle achesWeaknessDiarrheaVomitingStomach painLack of appetite Other symptoms including rash, red eyes, and internal and external bleeding, may also occur. The early symptoms of Ebola are similar to other, more common, diseases. There is no cure for Ebola. Centers for Disease Control and Prevention BOINC Ebola virus and Marburg virus: Complications Both Ebola and Marburg hemorrhagic fevers lead to death for a high percentage of people who are affected. As the illness progresses, it can cause: Multiple organ failure Severe bleeding Jaundice Delirium Seizures Coma Shock One reason the viruses are so deadly is that they interfere with the immune system's ability to mount a defense. For people who survive, recovery is slow. Hair loss Sensory changes Liver inflammation (hepatitis) Weakness Fatigue Headaches Eye inflammation Testicular inflammation Jun. 18, 2011 References Ebola hemorrhagic fever fact sheet.

Ebola Fast Facts Facts:Ebola hemorrhagic fever is a disease caused by one of five different Ebola viruses. Four of the strains can cause severe illness in humans and animals. The fifth, Reston virus, has caused illness in some animals, but not in humans. Ebola is extremely infectious but not extremely contagious. It is infectious, because an infinitesimally small amount can cause illness. Ebola could be considered moderately contagious, because the virus is not transmitted through the air. Humans can be infected by other humans if they come in contact with body fluids from an infected person or contaminated objects from infected persons. While the exact reservoir of Ebola viruses is still unknown, researchers believe the most likely natural hosts are fruit bats. Symptoms of Ebola typically include: weakness, fever, aches, diarrhea, vomiting and stomach pain. Typically, symptoms appear 8-10 days after exposure to the virus, but the incubation period can span two to 21 days. Italy - 1 case, 0 deaths

Ebola Virus - Department of Molecular Virology and Microbiology The Agent Courtesy: CDC Dr. Lyle Conrad Ebola viruses cause a severe illness known as Ebola hemorrhagic fever that can be lethal to humans and nonhuman primates. Ebola viruses belong to a family of viruses termed Filoviridae, which are characterized by a long filamentous structure. Courtesy: CDC Frederick A. Ebola was first recognized in 1976 as the cause of outbreaks of disease in the Democratic Republic of the Congo (then known as Zaire) and in Sudan. The Reston subtype of Ebola virus was first identified in 1989 in the United States in monkeys housed in a quarantine facility in Reston, Virginia. In late 2007, a fifth strain of Ebola virus emerged in western Uganda. Where does the Ebola virus go in between outbreaks? In 2005 it was reported that fruit bats may serve as the natural reservoir of Ebola. The Problem Ebola virus is a class A bioterrorism agent, known to cause highly lethal hemorrhagic fever. Credit: NIAID The Research Dr. For more information: Learn more about:

Ebola | Disease Directory Information about Ebola for Travelers No travel notices are currently in effect for Ebola. Guinea, Liberia, and Sierra Leone no longer have widespread transmission of Ebola; however, the virus can remain in certain body fluids of people who have recovered from Ebola. These body fluids include semen, fluids in the eyes, and fluids found in the brain and spine. Therefore, small numbers of cases may continue to occur. Although there is believed to be no risk of Ebola to most travelers, they should, as usual, avoid contact with sick people, dead bodies, or blood and body fluids. Travelers, particularly those who could be exposed to Ebola because of the work they are doing (see below), should enroll in the Department of State’s Smart Traveler Enrollment Program (STEP) to receive important information from the embassy about health and safety conditions and to allow the embassy to contact them in case of emergency.