An outbreak in Brazil has U.S. health experts wondering if yellow fever could be the next Zika. Yellow fever has broken out in the jungles outside Brazil’s most densely-populated cities, raising a frightening but still remote possibility: an epidemic that could decimate that country’s population and spread throughout the Americas, including the United States. 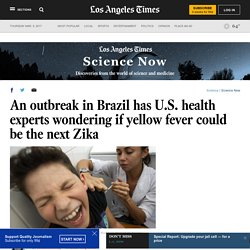 In an essay rushed into print by the New England Journal of Medicine on Wednesday, two doctors from the National Institutes of Health warn that cases of yellow fever, which can kill as many as 10% of those infected, have seen an unusual spike in the last few weeks in several rural areas of Brazil. Those outbreaks have been limited to places where there aren’t enough people or virus-spreading mosquitoes to fuel a rapid run-up in transmission. But they are on the edge of major urban areas where residents are largely unvaccinated, and where both humans and insects are packed densely enough to accelerate the disease’s spread. In the virtual absence of stockpiled vaccine, wrote Fauci and Dr. Catharine I. Melissa.healy@latimes.com. US officials monitor yellow fever outbreak in Brazil.

While the likelihood of yellow fever outbreaks in the US is low, "travel-related cases of yellow fever could occur, with brief periods of local transmission in warmer regions such as the Gulf Coast states," wrote Dr. 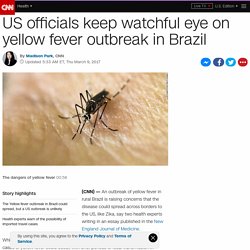 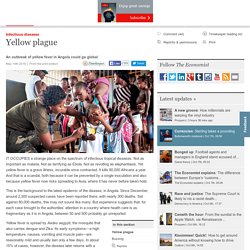 Not as important as malaria. Not as terrifying as Ebola. Not as revolting as elephantiasis. Zika May Be Scary, But a Yellow Fever Outbreak Is Underway and It’s Far More Deadly. Is yellow fever the next pandemic? 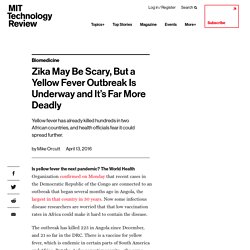 The World Health Organization confirmed on Monday that recent cases in the Democratic Republic of the Congo are connected to an outbreak that began several months ago in Angola, the largest in that country in 30 years. Now some infectious disease researchers are worried that that low vaccination rates in Africa could make it hard to contain the disease. Virus-transmitting &apos;yellow fever&apos; mosquitoes discovered in L.A. County. A new aggressive daytime-biting mosquito capable of transmitting debilitating and possibly deadly viruses has been found in the Los Angeles region, officials announced Wednesday. 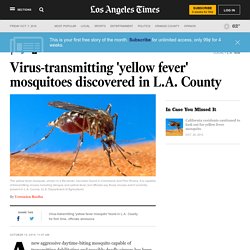 As globe-threatening yellow fever epidemic explodes in Congo, people ask ‘where is the vaccine?’ Crowds are cleared for a marketplace fumigation in Kinshasa, Congo, on July 15. 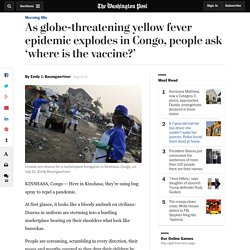 (Emily Baumgaertner) KINSHASA, Congo — Here in Kinshasa, they’re using bug spray to repel a pandemic. At first glance, it looks like a bloody ambush on civilians: Dozens in uniform are storming into a bustling marketplace bearing on their shoulders what look like bazookas. People are screaming, scrambling in every direction, their noses and mouths covered as they drag their children by their hands. Those in uniform chuckle, shaking their heads, smirking; they hiss into megaphones: “We told you we were coming.” Yellow fever: World on brink of global emergency over deadly outbreak, academics warn.

Urgent action is needed to combat a yellow fever epidemic in Africa amid signs it is turning into a global health emergency and a severe shortage of the vaccine, academics have warned. 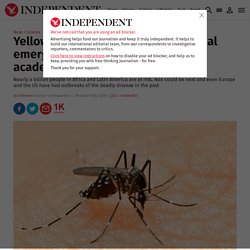 With nearly a billion people at risk from the deadly disease in Africa and Latin America and the danger of an outbreak in Asia, immunologist Professor Daniel Lucey and Lawrence Gostin, a professor in global health law, called on the World Health Organisation (WHO) to declare an emergency saying delays over Ebola had "cost lives". And they also said that because of the surge in new infectious diseases in recent years – thought to be driven in part by climate change – the world should now set up a permanent committee to decide how to respond as new threats emerge.

Angola is in the grip of its worst yellow fever epidemic since 1986 with more than 250 deaths, and the disease is spreading rapidly – Kenya, Uganda and the Democratic Republic of Congo have all reported cases. Play Video Close This is a modal window. Yellow Fever Is Completely Preventable, So Why Are Millions At Risk? 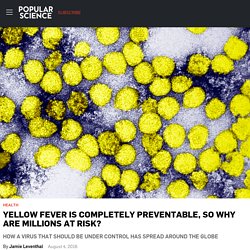 This is the story of yellow fever, a disease that shouldn’t be a problem in 2016. Joana Daniel Calunga is a young mother living in Kilamba-Kiaxi, a municipality of Luanda, Angola. Calunga wasn’t especially worried when the headaches and vomiting first started, but as her eyes started to turn yellow and traditional medicines failed her, she knew something was terribly wrong. “People told me it was yellow fever,” said Calunga, who recounted her experience for Popular Science via a World Health Organization’s representative in Angola. “I just cried because people were saying that the disease kills...I thought of my son and I thought oh my God, I’m going to go and leave him.” As Calunga laid weakened in a local hospital, she found comfort in her mother’s food and faith. 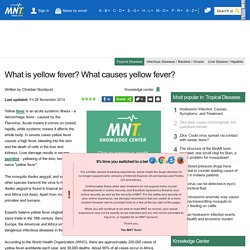 Acute means it comes on (onset) rapidly, while systemic means it affects the whole body. In severe cases yellow fever causes a high fever, bleeding into the skin and the death of cells in the liver and kidneys. Liver damage results in severe jaundice - yellowing of the skin; hence the name "yellow fever". The mosquito Aedes aegypti, and some other species transmit the virus to humans. Yellow Fever Attacks Philadelphia, 1793. Yellow Fever Attacks Philadelphia, 1793 With a population of approximately 55,000 in 1793, Philadelphia was America's largest city, its capital and its busiest port. 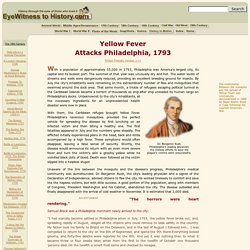 The summer of that year was unusually dry and hot. The water levels of streams and wells were dangerously reduced, providing an excellent breeding ground for insects. By July the city's inhabitants were remarking on the extraordinary number of flies and mosquitoes that swarmed around the dock area. Explicit cookie consent. Yellow fever outbreak continues in Africa. "Although the yellow fever situation is improving, the event continues to be serious and requires sustained, controlled measures," said Oyewale Tomori, chairman of the WHO Emergency Committee and a professor of virology at Redeemer's University in Nigeria. All told, the WHO estimates that there have been 6,000 suspected cases and 1,000 laboratory-confirmed cases of yellow fever, a viral hemorrhagic disease transmitted by infected mosquitoes. More than 400 people have died since the epidemic began in December.

But there is reason to be optimistic. Though suspected cases continue to be reported, the last confirmed cases were reported June 23 in Angola and July 12 in Congo, said Dr. Peter Salama, executive director of the WHO Health Emergency Program. "The health and epidemiology are pointing in the right direction," Salama said. Could Yellow Fever Become the Next Pandemic? KINSHASA, Democratic Republic of the Congo—In the doorway of a one-room yellow fever ward in downtown Kinshasa, a toddler named Julia is slung over her mother’s shoulder. Moments later a nurse directs mother and child to the last vacant bed and inserts an intravenous line into the girl’s wrist. Her lemon-yellow eyes staring vacantly ahead, Julia does not flinch as the needle punctures her skin. She could be awaiting a hand massage or a manicure. In the bed adjacent to her, 12-year-old Elohim has one knee propped up like a tent stake. His palms and the skin under his fingernails are yellow with jaundice.