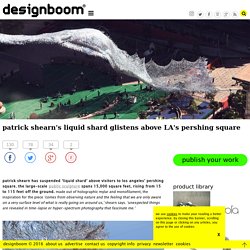 ‘unexpected things are revealed in time-lapse or hyper-spectrum photography that fascinate me.’ all photos by phil sanchez the work has been created in collaboration with now art LA and AAV school as part of an ongoing outdoor exhibition series focusing on temporary installations.

Space Cool Hunting - //contemporary art/installation/ WANDERN IM WISSEN by MANUEL DREESMANN. Wandern Im Wissen The State and University Library Bremen (SuUB) – Bremen, Germany – for its 350 years has reorganized and restructured the information to make it more accessible to its visitors. 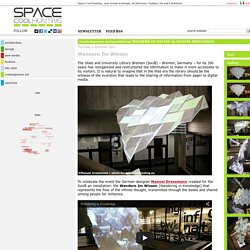 It is natural to imagine that in the iPad era the library should be the witness of the evolution that leads to the sharing of information from paper to digital media. To celebrate the event the German designer Manuel Dreesmann created for the SuUB an installation: the Wandern Im Wissen [Wandering in Knowledge] that represents the flow of the infinite thought, transmitted through the books and shared among people for millennia. 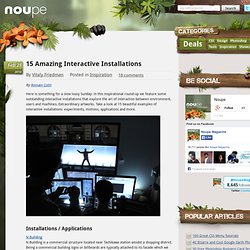 Link Editions, Beyond New Media Art. Technology and the Brightest Young Minds in Music, Art, Film, and Design. Art in California. If i were a man i'd want to be either Idris Elba or Garnet Hertz. 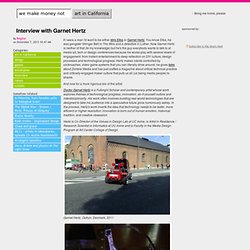 You know Elba, he was gangster Stringer Bell in The Wire and a detective in Luther. Now Garnet Hertz is neither of that (to my knowledge) but he's the guy everybody wants to talk to at media art, tech or design conferences because his works play with several levels of engagement: from instant entertainment to deep reflection on DIY culture, design processes and technological progress. Hertz makes robots controlled by cockroaches, video game systems that you can literally drive around, he gives talks about Zombie Media and has just crafted a magazine about critical technical practice and critically-engaged maker culture that puts us all (us being media people) to shame. Felice Varini - Mémoires contemporaines (2) AntiVJ is a visual label. Interactive Installations on Pinterest. 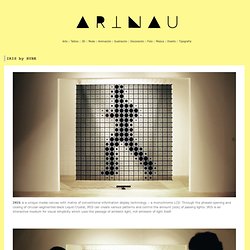 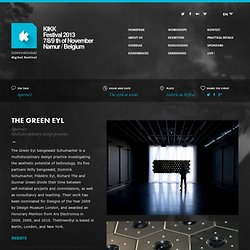 Its five partners Willy Sengewald, Dominik Schumacher, Frédéric Eyl, Richard The and Gunnar Green divide their time between self-initiated projects and commissions, as well as consultancy and teaching. Their work has been nominated for Designs of the Year 2009 by Design Museum London, and awarded an Honorary Mention from Ars Electronica in 2008, 2009, and 2010. TheGreenEyl is based in Berlin, London, and New York. Aperture is a facade installation with interactive and narrative displaying modes. Consisting of an iris diaphragm matrix, the facade's surface with its apertures' variable opening diameters is enriched by a dynamic translucency, that creates new imagery as well as a new channel for communication between inside and outside. A façade covered in electrical eyes becomes a porous skin for a building, allowing the world to flow through it.

Leap Motion - With a wave of a hand or lift of a finger, you’re about to change the way you use your computer. The Leap Motion Controller senses how you move your hands, the way you move them naturally. So you can point, wave, reach, and grab. Even pick s. 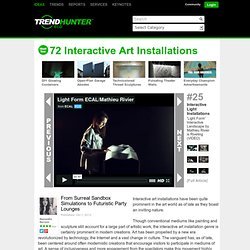 Though conventional mediums like painting and sculpture still account for a large part of artistic work, the interactive art installation genre is certainly prominent in modern creations. 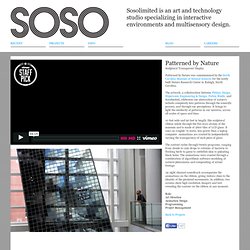 The artwork, a collaboration between Plebian Design, Hypersonic Engineering & Design, Patten Studio, and Sosolimited, celebrates our abstraction of nature's infinite complexity into patterns through the scientific process, and through our perceptions. It brings to light the similarity of patterns in our universe, across all scales of space and time. 10 feet wide and 90 feet in length, this sculptural ribbon winds through the five story atrium of the museum and is made of 3600 tiles of LCD glass.

It runs on roughly 75 watts, less power than a laptop computer. The content cycles through twenty programs, ranging from clouds to rain drops to colonies of bacteria to flocking birds to geese to cuttlefish skin to pulsating black holes. Rafael Lozano-Hemmer. Dynamic sculpture brings weather into airport. eCLOUD, conceived by Aaron Koblin, Nik Hafermaas, and Dan Goods, displays weather data from the National Oceanic and Atmospheric Administration (NOAA) via specialized liquid crystal displays, suspended from the ceilings of the San Jose International Airport.

The eCLOUD is a dynamic sculpture inspired by the volume and behavior of an idealized cloud. Made from unique polycarbonate tiles that can fade between transparent and opaque states, its patterns are transformed periodically by real time weather from around the world. When it's raining, the eCLOUD appears to be dropping, while in a city that has hazy skies, the display feel slow and lazy. Stormy weather shows a busy cloud, bouncing around wildly. Below is some footage of the piece in action. There is also a display that accompanies the piece, which shows you the city that is currently up and its weather conditions. Cinimod Studio Ltd. Electroland - Cameron McNall and Damon Seeley. Hack a Day — Fresh hacks every day. 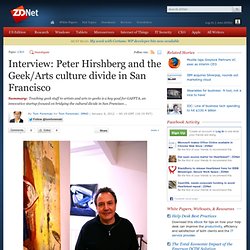 It's situated in the historic Warfield building in the heart of the Tenderloin, one of San Francisco's poorest neighborhoods. Its innovative art exhibitions and educational programs are rooted firmly in the deep cultural traditions of San Francisco, an area that has consistently contributed to leading edge arts, literature, and ideas, nationally and globally. Yet it seems that very little of that rich culture and diversity of San Francisco and the Bay Area is reflected in our tech communities, which draw in people from all over the world, but then trap them into insular startups and a monotonous always-on cubicle culture. - The Summer of Smart managed to produce several interesting apps. More info: Digital Arts@Google: R. Luke DuBois and Scott Draves.